Trinidad and Tobago’s trade, exports and imports have experienced both deficit and surplus in recent years. Major export items of the country are sugar, fertilizer, steel, coffee and flowers. It exports to the countries such as the US and the European Union. The goods that are imported to the nation are fuel and energy, capital goods and animals. For imports, Trinidad and Tobago (T&T) depends upon countries such as Japan and the European Union. In March 2010, T&T and Chile started negotiations for a preferential trade agreement between the two nations. Since 2009, trade between the two countries has increased significantly owing to Chile’s purchase of gas from T&T in huge amounts. The following charts illustrate Trinidad and Tobago’s trade with the US in 2009 and 2010.

NOTE: All figures are in US dollar million.

NOTE: All figures are in US dollar million.

The chart below shows T&T’s distribution of its major export partners. All data is in percentages. 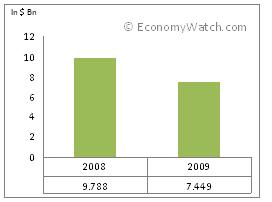