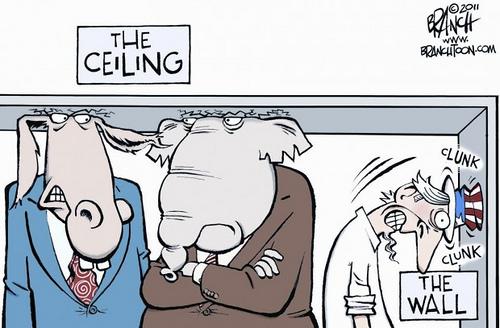 The painfully negotiated US budget legislation that Barack Obama signed on August 2 has three major flaws. One offsets the other, and the third threatens what America needs most in the coming years: economic growth.

WASHINGTON, DC – The painfully negotiated US budget legislation that President Barack Obama signed on August 2 combines an increase in America’s government debt ceiling with reductions in federal spending, thus averting the prospect of the first default in the 224-year history of the United States. But the agreement has three major flaws. Two of them offset each other, but the third threatens what America needs most in the coming years: economic growth.

The first flaw is that the spending reductions are badly timed: coming as they do when the US economy is weak, they risk triggering another recession. The measure’s second shortcoming, however, is that the spending reductions that it mandates are modest. While the legislation does too little to address America’s problem of chronic and rising budget deficits, the damage that it inflicts on the economy in the short term is likely to be limited.

The third and most damaging flaw, however, is that the spending cuts come in the wrong places. Because the Democrats in Congress have an almost religious commitment to preserving, intact, America’s principal welfare programs for senior citizens, Social Security and Medicare, the legislation does not touch either of them. These programs’ costs will rise sharply as the 78-million-strong baby-boom generation – those born between 1946 and 1964 – retires and collects benefits, accounting for the largest increase in government spending and prospective deficits in the years ahead. And, because the Republicans in Congress have an equally strong allergy to raising any taxes, any time, under any circumstances, the bill does not rely at all on tax increases – not even for the wealthiest Americans – for the deficit reduction that it provides.

All of the spending cuts come from the “discretionary” part of the federal budget, which excludes Social Security, Medicare, the Medicaid program for the poor, and interest on the national debt. That leaves only about one-third of total federal spending from which to cut, and much of that goes to the defense budget, which Republicans will attempt to protect in the future. So the structure established by the August 2 law concentrates deficit reduction on the “discretionary non-defense” part of the federal budget, which is only about 10% of it.