The Netherlands trade is the main support system for the economy. Netherlands’ location also means that the nation is closest to the European regions that have the maximum population density. In fact, almost 160 million people stay within a 300 mile radius of the Netherlands, giving the country many regions to trade with. Almost 80% of Netherlands’ exports are to European nations and nearly 70% of its imports come from European nations as well. The Netherlands trades with a positive trade balance.As the nation enjoys a massive contribution through trade, it is an ardent supporter of open trade, along with the US.

The Netherlands’ main export partners are:

The following graph shows how the different countries contributed to the exports volume (in percentage): 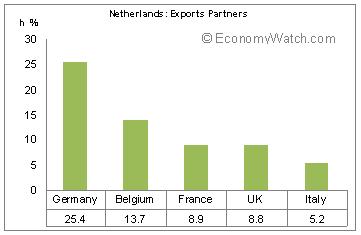 According to the 2009 statistics, the Netherland imported a total volume of $358.9 billion, dropping substantially from $474.8 billion in 2008. The Netherlands ranked eighth in the world in terms of import volumes.

With huge natural resources, the Netherlands requires machines to process them and therefore machinery dominates its imports. Other import commodities include:

The Netherlands’ main import partners are:

The following graph shows how the different countries contribute in the import volumes: 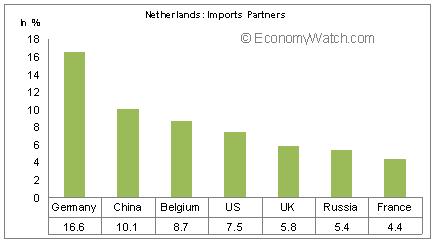