Ever since Mongolia joined the World Bank in 1991, the International Development Association has helped the country with more credits. Mongolia is also a member of the World Trade Organizations (WTO).

Historically, Mongolia has suffered from trade deficit; however, the trade gap has been very low. The recession of 2008 has marred the extent of exports and imports from Mongolia, with exports falling from $2.539 billion in 2008 to $1.902 billion in 2009.

Mongolia has some of Asia's richest mineral deposits which, however, remain largely unexploited. Following are products that feature prominently in Mongolia exports:

The country’s major export partners as of 2008 are: 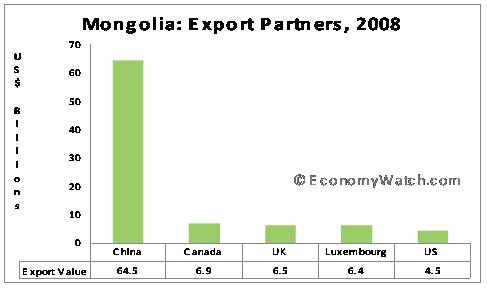 Mongolia’s import trends show a fall, which is a positive sign for maintaining positive trade balance. The import volume has contracted from $3.224 billion in 2008 to $2.131 billion in 2009.

The main import items include: