Iraq is a member of the Organization of the Petroleum Exporting Countries (OPEC), an international trade organization. Subsequent to its invasion of Kuwait, the country was barred from exporting anything but oil, from 1990 to 2003. This was done by the United Nations (UN) under the Oil-for-Food program. Iraq was allowed to use the proceeds for importing materials of civilian needs, including food, medicine, and infrastructure-repair parts. The export of oil accounted for US$7.4 billion of the total exports in 2003.

Since the lifting of the UN sanctions in 2003, Iraq has been attempting to further trade relations with the US and the international trade community. During this period, Iraq made enormous imports including food, fuels, medicines, and manufactured goods. In 2004, the nation was given the designation of abeneficiary developing country by the UN under the Generalized System of Preferences (GSP) program. In 2007 and 2008, Iraq participated in the two Working Party meetings to promote its WTO accession. This was required to bring its trade regime at par with the multilateral international trade system. The total exports of Iraq dropped to $37.89 billion in 2009 from the previous year’s $58.81 billion. Oils exports in 2009 amounted to 1.9 million bbl/day in 2008. The total imports of Iraq in 2009 also decreased to $35.77 billion, as compared to $37.22 billion in year 2008.

The following graph shows exchange rates of Iraqi dinars (IQD) per US dollar: 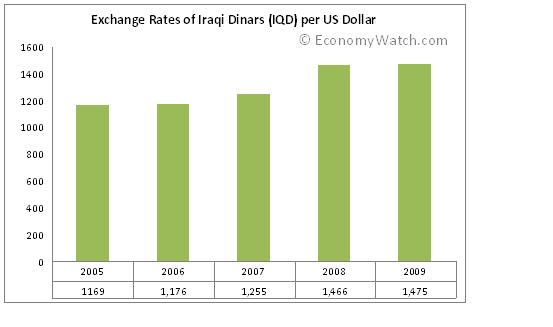 Some main export products of Iraq are:

The major export partners of Iraq (as of 2008) are as follows:

Some of the main import products of Iraq are:

The major import partners of Iraq (as of 2008) are as follows: