The United States is the key Guatemala trade partner, in both exports and imports. El Salvador, the Honduras, Mexico, Nicaragua and Panama are the other trading partners of this Central American nation. Guatemala’s trade relations with the US and the other Central American nations have improved significantly, following the ratification of the US Central America free trade Agreement or CAFTA in 2005. The enforcement of this treaty on July 1, 2006, led to the elimination of customs tariffs on several categories of goods, opening up of services and defining of clear rules in various areas of business. Guatemala is also a member of the Central American Common Market Trade Group (CACM) besides having free trade agreements with Panama, Chile and the Dominican Republic.

Below is a chart showing Guatemala’s trade figures with the US in millions of dollars. (source: US Census bureau- foreign trade statistics). 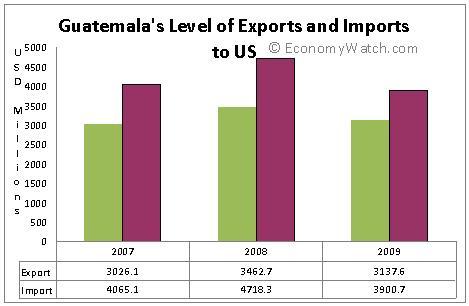 Rich agricultural resources and vast cultivation of traditional crops, such as coffee, banana, cardamom and sugar, allow Guatemala to export these commodities. However, in recent years, farmers in the country have switched to farming fruits and vegetables, and cut flowers for exports. Petroleum and apparel are the other main products exported by Guatemala. While the US remains the biggest exporter of goods and accounted for nearly 40% of Guatemala’s exports in 2008, El Salvador accounted for 12.6%, followed by Honduras at 9.5%, Mexico at 6.6%, Nicaragua at 4.2% and Costa Rica at 4.1%.