Ecuador has targeted $1 billion worth of exports to India by 2010. While the value of exports to India was worth $110 million in 2007, it increased to $120 million by 2008. India exports organic chemicals, vehicles and accessories, steel, iron and pharmaceutical products to Ecuador, and imports tropical wood, crude oil, tea, coffee and scrap iron. Ecuador also exports power to Colombia and Venezuela, mainly due to the Paute Dam which supplies 35% of Ecuador’s electricity needs.

Ecuador’s total exports in 2009 were worth $13.63 billion, down from $19.15 billion in 2008. Its primary export commodities include petroleum, bananas, shrimps, cacao, coffee, hemp, fish products and wood. The following chart shows the distribution of Ecuador’s export partners. 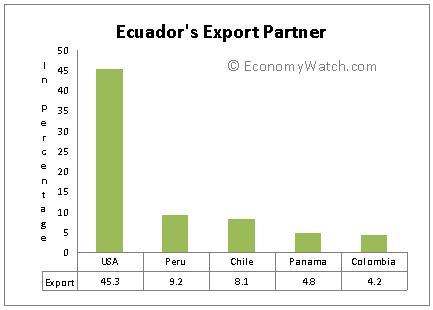 Ecuador’s total imports were worth $14.23 billion in 2009, down from $17.79 billion in 2008. Its primary import commodities include industrial materials, lubricants and non durable consumer goods. The following chart shows the distribution of Ecuador’s import partners. 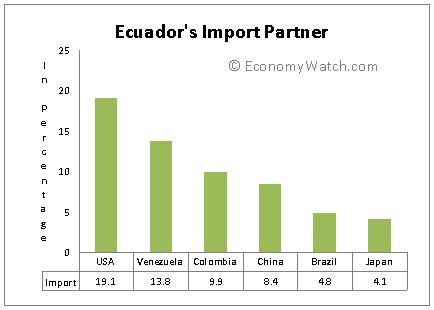