Croatian trade is characterized by heavy machinery and electrical equipment. Croatia receives much desired foreign currency through substantial amount of exports and is further boosted by a sustained tourism industry.

Italy is Croatia's primary trade partner, being the largest import and export trade relation. Germany is also a key partner.

The following graph shows how the various countries contributed to the total export volume (in percentages): 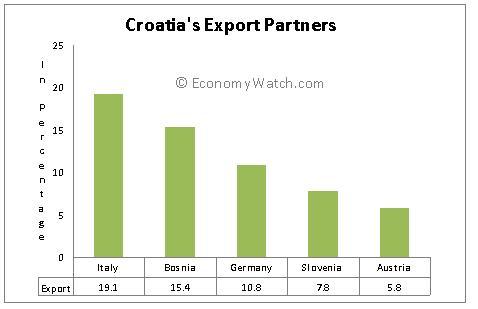 As for Croatian imports, 2010 import trade was valued at $20.47 billion and ranked the country was the 66th in the world.

Import trade revenues declined from 2008 when import trade was valued at $30.42 billion.

The main import commodities include machinery, transport and electrical equipment; chemicals, fuels and lubricants and foodstuffs.

The following graph shows how different countries accounted for the total import volume (in percentages): 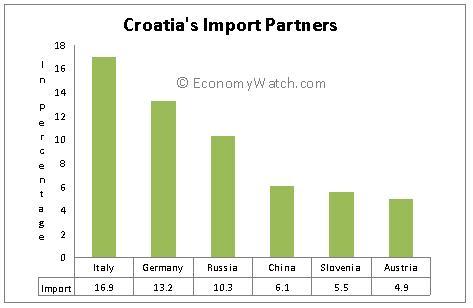 Croatia's trade deficit seems to have almost doubled in the recent years, therefors, tourism provides a major pillar in its economy and trade, contributing largely to foreign exchange - balancing the deficit.