Based on the UN Human Development Index, Chad is one of the poorest countries in the world. The fragile state of Chad’s economy is highly attributed to the ongoing civil war. Chad’s economic structure is highly agriculture-centric, with an underdeveloped industrial sector.

According to the 2009 statistics in the CIA World Factbook, Chad’s GDP stands at US$15.85 billion, which is 1% below the previous year’s level. Based on the GDP figure, the country ranks 133rd in the world. Agriculture is the mainstay of the Chadian economy, with a GDP share in excess of 57%. This sector provides regular and seasonal employment to more than 80% of the working population. However, the industry and service sectors contribute 7.5% and 35.3% to the GDP, respectively. 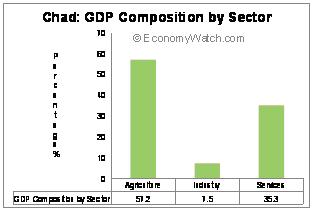 Chad’s economic structure has been suffering from a severe humanitarian crisis caused by political instability. The country houses more than 0.3 million refugees from the disturbed regions of Sudan and the Central African Republic and 0.2 million internally displaced persons. Despite several international efforts, political stability cannot be restored in Chad. The refugees are highly depend on humanitarian assistance from the UN, IMF and World Bank for basic necessities of life.

Chad has a significant oil and mining sector, waiting to be explored. However, foreign investors are not keen in investing large sums of money due to the existing political turmoil. The country has also approved tax benefits for foreign investors.

Chad’s economy highly depends on financial assistance from international donor agencies. To continue receiving foreign aid, the government has to roll out several economic reforms. These reforms are focused on ending corruption and ensuring financial transparency. As the economic health the country is gradually improving, foreign direct investment is flowing in. With international aid and foreign investment, the Chad-Cameroon oil pipeline was inaugurated in 2003. The project is a major breakthrough in the development of the oil-based economy in Chad.