Being centrally located in the European continent, Belgium’s trade is the hallmark of all its activities. Belgium’s trade is further helped by its well developed transportation network, diversified commercial and industrial base.

However, as Belgium must import a substantial amount of raw material to flourish, the nation relies heavily on imports and thus is exposed to global market volatility. Thus, the year 2008-09 proved challenging for the country. The GDP dipped from $394.9 billion in 2008 to $381.4 billion in 2009.

As raw materials and natural resources are not sufficient, the balance of trade is usually towards imports and thus there is always some trade deficit in Belgium.

According to the 2009 estimates, Belgium had an export volume of $296.1 billion and ranked 13th in the world. This, however, showed a tremendous drop from the 2008 figures, which shone bright at $371.5 billion. The various export commodities include:

The following countries are the biggest export partners of Belgium:

This is how the aforementioned countries contribute (in percentage) 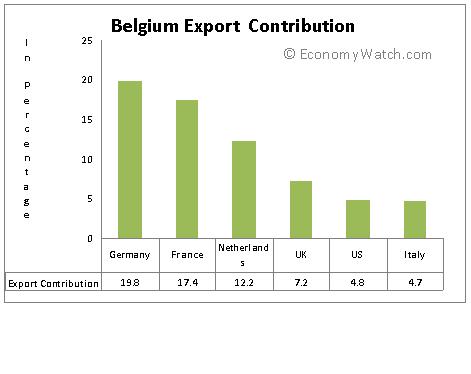 The trade balance is slightly skewed towards imports. According to the 2009 estimates, Belgium reported its import volume at $315 billion and ranked 11th in the world. This was, however, lower than the 2008 figure of $387.7 billion.

The various imported commodities are:

The various Belgium import partners are:

This is how the aforementioned countries contribute (in percentage) 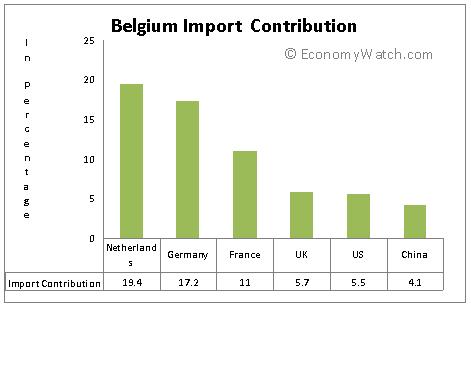