The U.S. May Get Trumped 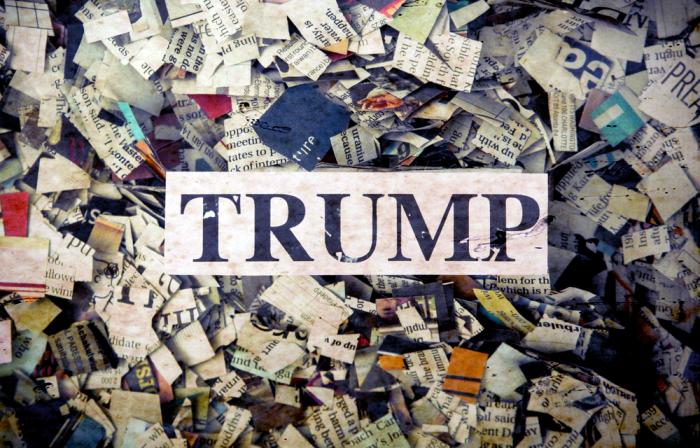 This Great Graphic is a 90-day history of the "betting" at PredictIt that Trump becomes the new US President.  With Cruz suspending his campaign, the odds of Trump have risen just above 40%.

The US national interests and challenges to those interests do not change much from year-to-year, and this may help explain the continuity in US foreign policy (including foreign economic policy).  Trump's campaign style emphasized a break from the conventional approach.

Already, a faction concludes that the US is shouldering a greater burden for globalization than it ought to as a question of will and resources.  This faction mocks the United Nations and dragged their feet about accepting the new quotas at the IMF, which were a precondition of reforms. 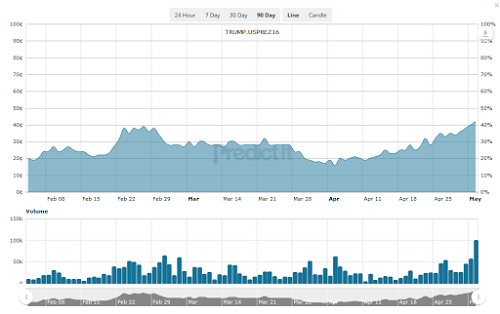 Also given Trump's style (temporally inconsistency); it is difficult to anticipate a coherent set of policies.  The foreign economic policy thrust seems to be one of unilateralism that could scare foreign investors.  The US is a net debtor in that foreign investors own more US assets (portfolio and direct investment) than US investors own foreign assets.

Since the Great Financial Crisis, global trade, and capital flows have not recovered fully.  Part of the populist appeal that is evident in many countries, including the US, is the view of that the globalization is undermining living standards.  In Europe, integration may be understood as a subset of globalization.  In an event, the multilateral institutions and the post-WWII order seem fragile this moment in time.  The thrust of Trump's foreign economic policy would seem to weaken that fragile order.

Perhaps Trump is embracing the idea of the G-Zero world suggested by some political scientists.  The US no longer has the power to provide hegemonic leadership to make and enforce the rules of engagement that some scholars argue is necessary.  What follows is that the US does not have to sacrifice occasionally is short-term interests for strategic goals.  Therefore, the US is free to pursue its narrow national interests.

When considering the dollar impact of a new administration, it has often been helpful to think about the likely policy mix.  The best policy mix for a currency is the loose fiscal policy and a tight monetary policy.  This was the policy mix of the Reagan dollar rally.  It was also the policy mix in Germany after the Berlin Wall fell, which led to the German mark overshoot and ERM crisis (that led to the Maastricht Treaty and EMU).

If, despite Trumps allusions (illusions?) of firing Yellen, the Fed does continue to gradually normalize monetary policy, the key moving piece will be fiscal policy.  One of the reasons why some conservatives don't support Trump is that amid the conflicting signals, it sounds as if fiscal policy may be relaxed in a Trump government.

Global investors, like US investors, are talking about Trump, but so far, investors have not reacted.  The focus will shift to Trumps vice presidential candidate and the Republican Party platform.  On the Democrat side, Sanders' win in Indiana keeps the race alive, on paper at least, and California is the last big prize.

How Clinton reaches out to Sanders supporter is an important part of the process in the coming weeks.    Lastly, the controversial nature of Trump's candidates has spurred talk that the Democrats could take both houses of Congress, on ideas that many Republicans will not turn out to vote.

Great Graphic: Odds of President Trump Rise (Predictit) is republished with permission from Marc to Market