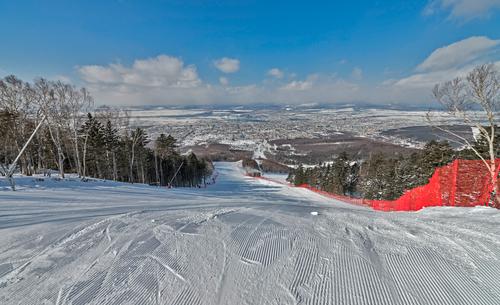 Winston Churchill famously said of Russian foreign policy that it was "...a riddle, wrapped in a mystery, inside an enigma."  What people leave out is what followed.  Churchill offered an answer:  "... perhaps there is a key. That key is Russian national interest."

Like most crises, the one Russia is experiencing is over-determined, in the sense there are several causes.  The actions in Ukraine, and particularly the annexation of Crimea, and the continued destabilization of East Ukraine spurred sanctions from the US and Europe.  The sanctions, especially the ban on access to the short-term funding markets in the US and Europe, are more significant given the other developments.

However, other causes of Russia's difficult straits stems from two developments largely out of its control.  The first is the end of the international markets affection toward emerging markets.  The multi-year bullish EM phase was a function of a number of factors, like low and falling US interest rates, a weak US dollar, rising commodity prices, and a rapidly growing China, that no longer exist.  Russia, like many emerging market countries, did not take advantage of the commodity boom to diversify the economy.

The second development that was largely outside of Russia's influence is the dramatic decline in oil prices.  Even if Russia did not antagonize Saudi Arabia by supporting the Syrian and Iranian regime, Saudi Arabia would most likely have responded to the challenges represented by the US shale producers, Canadian tar sands and other non-OPEC producers.  OPEC itself faces governance issues and enforcement.

The economic crisis Russia is facing is severe.  However, talk of an imminent Russian default is misplaced.  Russia appears to have $380-$400 bln of reserves.   Not all of these are liquid.  Many in the blogosphere heralded Russia’s purchases of gold as a way to diversify away from fiat currencies.  Russia has more than 10% of its reserves in gold and it is cumbersome to use to intervene or to offset a currency mismatch.  Of course, it earns no yield either.  Another $170 bln of reserves are part of the two sovereign wealth funds Russia has established.  These investments might not be particularly liquid either.

According to the central bank's figures, Russia has a total of about $54 bln of foreign currency bonds coming due in H1 2015.  Most of this (~$40.5 bln) is bank debt.  There is about $13 bln of foreign currency denominated corporate bonds maturing and about $500 mln of hard currency sovereign debt maturing.  For all of next year, Russia has an estimated $102 bln external debt maturing and another $100 bln in 2016.

In the meantime, Russian oil companies are earning dollars (mostly) from its foreign sales.  Although the oil and gas sales earn fewer dollars, those few dollars still turn into more roubles.  Indeed, Russian companies with substantial foreign sales are in a relatively good position.  This is to say that Russia's debt servicing ability is far from exhausted.

This does not mean there will be no downgrade for Russia.  S&P already has Russia's credit rating at BBB-, the lowest of investment grade ratings.  Fitch is at BBB, and Moody's is even higher at Baa1 (BBB+).  It is possible that Russia loses its investment grade status next year, depending on several variables, including the evolution of oil prices and the credibility of Russia's policy response.   Our proprietary model puts Russian credit at BB+.

BIS figure show that as of the middle of this year, foreign banks have about $207 bln exposure to Russia.  European banks account for about three-quarters.  Banks in Austria, Netherlands, Italy and France have the largest exposures.  Although some banks may choose to make extra provisioning, Russian exposure does not appear to be a systemic threat.

In addition to finance, trade is another potential channel of contagion.  Russia is a net exporter, but some countries rely on exports to Russia more than others do.  For most global investors, the concern is over the central and east European countries.  Exports to Russia account for 4.5% of Turkey's exports last year.  This is just above Russia's share of Polish exports (4.2%).   Russia accounts for about 3% of Romania and Hungary exports.  Russia accounts for about 4% of the Eurozone’s exports.

Some industries like autos and luxury goods may be particularly vulnerable, even if initially consumers rush to buy goods as a better store of value than the rouble itself.  Again, a deeper economic contraction in Russia may cause some discomfort for foreign companies that service Russian demand; it does not rise to the level of a systemic threat.

President Putin holds his annual press conference tomorrow.  In recent days, extended talks with the EU show a more constructive stance by Russia.  However, at same time, we have seen such feints before.  Putin is well aware that the US Congress has authorized Obama to implement additional sanctions.  The EU Summit at the end of the week may also discuss more sanctions.

Although infighting among the political elite has risen, we do not expect Putin to capitulate.  Behind the carrot of greater cooperation, Russia is also brandishes a stick.  For example, the foreign minister has threatened to place nuclear weapons in Crimea.  Russia could also continue to wage a low-scale war of intimidation against Georgia and Moldova.  Its submarines and military planes have continued harass its neighbors.

Polls continue to show Putin enjoys widespread public support.  We are somewhat skeptical of the polls because of the implicit intimidation and official censorship of the news.  That said, Putin does give voice to what appears to be widespread sense that the West, and especially the United States, has mistreated Russia and not given it the respect for which it is entitled.  Many see Putin as almost a savior.  Criticism of Putin moves to other parts of the Russian government, like the central bank.  The forbearance of the Russian people and their ability suffer without revolt is legendary, especially when blaming the West or United States.

While this is a serious crisis, Russia has arguably experienced worse since the 1997-1998 debacle.  Brent fell below $40 a barrel in 2008.  The price to insure against Russian default (CDS) reached 630 bp this week.  In 2008, it was nearly twice this.  This is to say economic and political pressure on Russia will have to intensify if expectations of a fundamental change in behavior are to be expected.