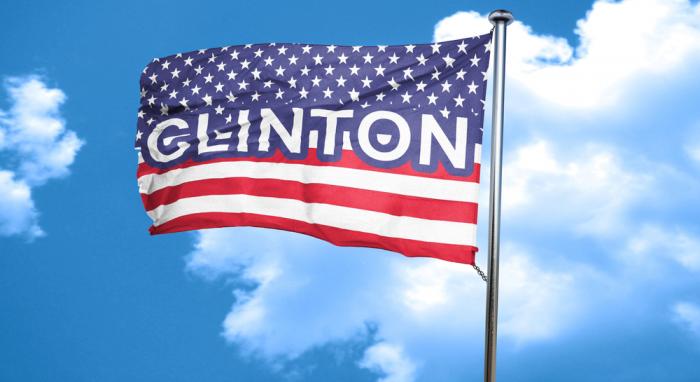 The bookmakers have historically been reliable predictors of election results and they make her 4-11 on to defeat Trump. However, Hillary Clinton’s gender will not be the most unusual aspect if she arrives at the seat of power in Washington. Even more groundbreaking is that two Presidents will reside at the same time in the White House.

The awkward matter for Hillary Clinton, who will need to step out of her husband Bill’s shadow, is that he remains much more popular than she is. Her weak favourability ratings have hovered at around 40%, with as many as 55% of voters not trusting her. In contrast, YouGov research has suggested Bill Clinton has higher approval ratings than his wife among Democrats, Republicans and Independents.

“Whether Clinton, or Trump wins the election, the new President will start off facing a high level of dislike, suspicion and distrust,” said Professor Richard Wolff, from New School University in New York. “There’s no parallel in recent US history. The normal pattern is over-enthusiasm at the start, and then they get gradually worn down and end up being hated.”

Political scientist John Pitney, the co-author of Bill Clinton: The Postmodern Presidency agrees that whoever becomes President will enter the White House will a daunting set of image problems. “With Trump it’s because of his bigoted statements and with Hillary, it’s because of the ongoing ethical scandals that stretch back to the early days of the Clinton administration and the Whitewater controversy,” he said. “Either candidate will limp into the White House with a lot of baggage and Americans will have pre-paid on the next President’s unpopularity.”

Aware of her poor image, Hillary Clinton has sought to bask in the reflected glory of Bill Clinton’s presidential record by promising to appoint him as an “economic tsar”. Although Clinton’s political legacy is hotly disputed, most Americans remember with affection the boom years of the 1990s when 22.7 million jobs were created. His role, she says, is to revitalise disenfranchised parts of the US economy, including coal country and the inner cities. However, the strategy of relying on her husband to boost her approval ratings is fraught with danger, according to Professor Wolff.

“Clinton knows people are really unhappy about their economic situation and she is hoping they have a ‘good ole days’ mentality about the go-go years of the 1990s before everything went down the pan and she can associate herself with that,” he said. “But it could have the opposite effect. By giving Bill a powerful role on the economy, she inadvertently underscores her own fragility and nothingness by comparison with him. She has made herself into the person who cannot solve those problems and needs him to do it for her. There’s also a danger she is undermining her bona fides as a feminist leader.”

John Pitney, however, took a different view. He described the involvement of Bill Clinton as a “shrewd tactic” because most Americans remember the 1990s fondly. “There is a slight danger that she won’t emerge from his shadow because she has to show her identity and resources to gain respect. But on the other hand, she has an amazing resource under the same roof, someone with vast institutional and policy knowledge and it would be crazy not to take advantage of that,” he said.

Where Professor Wolff and John Pitney agree is that Bill Clinton’s reputation as the economics mastermind that presided over the boom of the 1990s is largely a figment of the imagination. “The influence of a President on the ebbs and flows of the economy is pretty small and mostly reactive when dramatic action is required,” said Professor Wolff. “What happens over eight years in power is best attributed to a host of phenomena that happened before he became President.”

Clinton was largely a passive participant in the democratic embrace of neoliberal policies, Wolff says. He followed the ‘triangulation’ strategy of his chief political advisor Dick Morris, aiming to position the Democrat party above the polarities of right and left. However, Clinton, Wolff says, simply “went along for the ride”. Economic policy was set by his advisors, many of whom were bankers, including the Secretary of the Treasury Robert Rubin. “In the economics departments of the elite US colleges, Bill Clinton had a well-deserved reputation for knowing nothing and caring less about economics,” said Professor Wolff.

Even if we give Clinton credit for the jobs boom during his years in power, his reputation has to be counterbalanced by the long-term negative impact of some of his policies. “There’s no question he presided over one of the most hysterical debt-fuelled economic expansions in US history,” he said. “The expansion started in the 1970s and 1980s and didn’t need him, but he blithely presided over it and did nothing to stop it even though it was clearly based on debt. Eventually, it led to the stock market collapse of 2000 and the 2008 financial crisis. Anyone who considers that to be ‘masterful economic management’ has lost his mind to delirium.”

The influential political commentator Robert Reich, who was Secretary of Labor under Bill Clinton, agrees with Professor Wolff that Hillary Clinton’s attempt to associate herself with her husband’s legacy is fraught with peril. For Reich, this is largely because of the lasting failures of Clinton’s policies.

Reich points out that Clinton passed the North American Free Trade Agreement (NAFTA), which undermined manufacturing jobs and unions, while benefiting the biggest corporations who could shift production out of the US, to Mexico and other nations. In addition, he signed the Welfare Bill that “subsequently forced millions into poverty because it limited welfare to five years in a recipient’s lifetime”. Clinton also repealed the Glass-Steagall Act, which contributed to the rise of too-big-to-fail banks.

“Again, I don’t really blame Bill Clinton for the deregulation agenda,” said Professor Wolff. “The banking sector fought for decades to get the Act repealed and they began weakening it when the political winds changed at the time of Ronald Reagan and Margaret Thatcher. Yes, Bill Clinton signed it in the end, but he did it with massive bipartisan support from both Republicans and Democrats.”

Whatever the extent of Bill Clinton’s culpabilities, Donald Trump will try to exploit the Clintons’ vulnerable points in the months ahead. There will be a lot of talk about the damaging effects of NAFTA, but his major strategy is likely to be to remind the US people regularly of Bill Clinton’s alleged sexual misconduct. Several women have either accused him of rape, or sexual harassment. Other women have alleged adulterous affairs and the White House is still haunted by the ghost of Monica Lewinsky.

“The one thing Trump does well is finding an opponent’s weak dimension and then vulgarly exploiting it. He will remind the US people that Bill was an out-of-control sexual predator. There are half a dozen women we know about and heaven knows how many we do not know about. Mrs Clinton has never said much about it, but Trump will,” he said.

John Pitney does not rule out further indiscretions on the part of Bill Clinton. The media, he says, will be keeping a close eye on him. “Democrats will tend to look upon Bill favourably unless he gets into more trouble, which he could because he’s Bill Clinton and that’s what happens,” he said. “What makes it less likely now is his age as he won’t have the same energy he did in the 1990s. Not many men do.”

As well as the strategic and ethical complexities that the Clintons will have to resolve, there are fun aspects to the co-habitation of two Presidents in the White House. What, for example, should people call Bill Clinton? Hillary Clinton has joked that he might be called “first dude”, or “first mate”, and Bill Clinton has suggested he could go by the name of “Adam” as the first man. Although he has the right to be called Mr President, that could get confusing when he’s alongside his wife, so he is more likely to be called Former President Clinton. The Office of the First Lady will also have to be renamed, presumably something like the “Office of the President’s Spouse”.

Being a man may work in Clinton’s favour, however, allowing him to avoid some of the more onerous tasks expected of a First Lady of the United States (FLOTUS). There won’t be the same pressure to look stunning in an inaugural gown, or win the traditional first-lady bake-off, for example. He could carry on his work for his Foundation in New York, whilst taking an advisory role that avoids the limelight allowing his wife to take centre stage.

“It’s an unprecedented situation and no one knows how it will play out,” said John Pitney. “We’ve had very skilled and knowledgeable spouses in the past. No one knew how shrewd and intelligent Jackie Kennedy was and Lady Bird Johnson could have been a great politician in her own right. But we’ve never had a situation where we have a spouse who we have to address as Mr. President!”

See also: For Better or Worse, the U.S. is Getting a New President