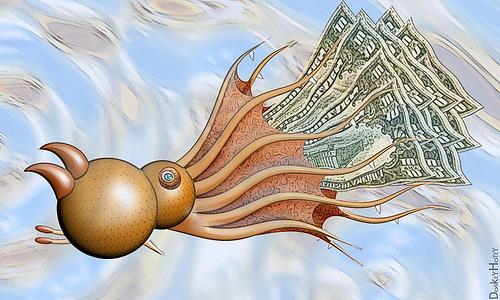 Goldman Sachs is the bank everyone loves to hate. In the first of our two-part investigation into the bank, we ask why they emerged as the biggest winners in the financial crisis. We also look at how they lobbied the US Government to reduce banking regulations, how they acquired massive fortunes by selling sub-prime mortgages, and how they deceived their clients by betting against the products they sold.

Don't Forget To Read The Second Part Of Our Feature: Into The Belly Of The Beast (Part II – Goldman Sachs & The European Crisis)

Goldman Sachs was not always the investment bank everyone affects to despise. Its bankers were once dubbed “billionaire boy scouts” because of their talent for making fortunes while maintaining a guilt-free, cherubic image.

But Goldman’s bankers are now far more likely to be compared to squids than boy scouts and have become the favourite target of anti-bank protestors. A week before Christmas, 300 protesters in the Occupy Movement dressed up in squid costumes and carried a giant puppet squid on a march to Goldman Sachs’ offices in New York.

The action was inspired by a Rolling Stone article which compared Goldman Sachs to: “a great vampire squid, wrapped around the face of humanity, relentlessly jamming its blood funnel into anything that smells like money”. The protesters shouted: “We fry calamari”, and “everyone pays their tax. Everyone, but Goldman Sachs.”

Related: Waking Up From The Nightmare On Wall Street

Related: A Global Transcendence of Change – What The 99% Really Want: Joseph Stiglitz

Public hatred of Goldman, fuelled by modern mass media, has intensified, but it would be naive to believe the banks’ character has fundamentally changed. Although there was nothing on the same scale as its nefarious role in the 2007 Financial Crisis, Goldman has been involved in controversy ever since it was founded by the German-born Jew Marcus Goldman in 1869. In 1929 for example, Goldman sponsored a pyramid scheme disguised as a mutual fund, which collapsed causing 42,000 investors to lose US$300 million. Then, in 1970, came the Penn Central catastrophe in which a default on short-term paper marketed by Goldman produced damage claims exceeding the bank’s net worth. In the late 1980s, Goldman’s head of risk arbitrage, Robert Freeman, was sent to jail for insider trading. And during the same period, Goldman was implicated in an illegal scheme to prop up insolvent businesses operated by the corrupt Czech-born newspaper tycoon Robert Maxwell.

“The reality is that the firm has been in and out of trouble throughout its whole existence and has constantly been pushing the edge of the envelope,” said William D. Cohan, a former investment banker and the author of Money and Power: How Goldman Sachs Came to Rule The World.

Cohan marvels at the hypocrisy embedded in Goldman Sachs’ 14 Business Principles, which were codified in the 1970s and are still being drummed into brainwashed employees’ heads today.

“They make the general public think they believe in them, but the most important principle is ‘putting the client first’, whereas the reality is they are in business to make money and will do it any way they have to,” he said.

Cohan believes the 14 principles are at the heart of what he calls Goldman’s ‘holier-than-thou attitude’.

“At Merrill Lynch, we had principles scratched into the wall, but never gave them a moment’s thought. But at Goldman they write them down, distribute them and reinforce them regularly. There’s an element of ‘drinking the Kool-Aid’ when you join Goldman and most of them fall for the brainwashing. They get people young so they can mould their thinking. “

“To give an example of the Goldman mindset, I was giving a talk recently to 250 New Yorkers and a Goldman Sachs banker stood up and loudly berated me for daring to suggest they were not all saints.”

Suzanne McGee, a journalist and author of Chasing Goldman Sachs, believes there was a change in the bank’s status in the 1970s.

“For most of its 200-year history Goldman wasn’t the force it is today. It transformed itself in the 1970s, which was a turbulent period when some firms thrived and others withered on the vine. Goldman was one of the most innovative banks and by the mid-1980s it was positioned to be a power house,” she said.

“What interests me historically is how Goldman changed from being the firm everyone might not like, but admires, to the firm everyone affects to despise. Up to the 1990s, their reputation was very high. In that period, if an IPO was underwritten by Goldman Sachs that was akin to Good Housekeeping’s sales approval. They were believed to have the X-factor, which meant they could outperform everyone else in every way. This reputation was so strong that in the late 1990s their bankers were banned from carrying bags with Goldman Sachs logos on when they took flights to conferences. The bosses were afraid they’d tip off rival traders.”

“But that mainly positive reputation has gone since the financial crisis. Goldman Sachs’ workers still don’t carry bags with logos, but now it’s because they might get beers poured on their heads, or someone might pick a fight with them!”

While McGee expresses a grudging admiration for the financial acumen of the Goldman elite, she is under no illusion that they follow the ‘do what’s best for the client’ principle to the letter.

“Someone at another bank said that when Goldman comes with a deal the first question you ask should not be ‘will they screw me’? It should be ‘in which way will they try to screw me’? Other banks are the same, but Goldman is far better at it than anyone else”.

Just how much better became evident in 2007, when the US housing bubble burst and the nation was plunged into its biggest financial crisis since the Great Depression. The fall-out for America’s financial sector was huge. Lehman Brothers filed for bankruptcy, IndyMac bank collapsed, Bear Stearns was acquired by JP Morgan Chase, Merrill Lynch was sold to Bank of America, and mortgage giants Fannie Mae and Freddie Mac were put under government control. Meanwhile, although Goldman helped to provoke the crisis, it made billions of dollars out of it by taking out huge bets that the mortgage market was about to crash. The firm went on to earn US$11.6 billion in 2007, more than Morgan Stanley, Lehman Brothers, Bear Stearns and Citigroup combined. Merrill Lynch lost US$7.8 billion that year.

“The crisis was not a natural disaster, but the result of high risk, complex financial products; undisclosed conflicts of interest; and the failure of regulators, the credit rating agencies, and the market itself to rein in the excesses of Wall Street.”

Goldman Sachs CEO Lloyd Blankfein even apologized in 2008 for his bank’s role. “We participated in things that were clearly wrong and have reason to regret,” he confessed.

But the apology was meaningless, according to William K. Black, an American lawyer, author and former bank regulator, who has testified against the banks. Black believes Goldman knew precisely what it was doing and was operating according to a well-known formula in the financial world. If he had his way, Black says he would send Goldman’s bankers into the fourth circle of Hell – which is reserved for the avaricious - in Dante’s inferno.

“Goldman, and other investment banks, behaved fraudulently in order to earn massive amounts of money,” Black said. “There were four ingredients in their foolproof fraud recipe. 1. Grow like crazy. 2. Make really crappy loans at a premium yield. 3. Have extraordinary leverage. 4. Make virtually no allowances for future losses.”

“If you do those four things, you are virtually guaranteed to report record off-the-chart short-term profits. We’ve known this in economics since a 1993 paper by Akerlof and Rohmer called Looting The Economic Underworld of Bankruptcy for Profit. Even if a firm fails, the CEO and all the other folks will walk away wealthy. It’s maths; a sure thing!”

Related: It’s Bonus Time At Goldman Sachs, How Much Are They Paying Out?

The first two elements of the formula, Black says, are related. A bank grows like crazy by making “crappy loans”. Good loans would not work because a bank would have to buy market share, cutting its yields.

“But there are tens of millions in the US who cannot afford to repay a loan to buy a house. Precisely because they can’t, the bankers can charge a premium yield and can grow like crazy. Into the teeth of this glut, they created the largest bubble in the history of the world.”

See also: Capitalism’s Pallbearers: The Companies That Run, & Could Destroy, The Global Economy