Is The US Responsible For China’s Military Build-Up? 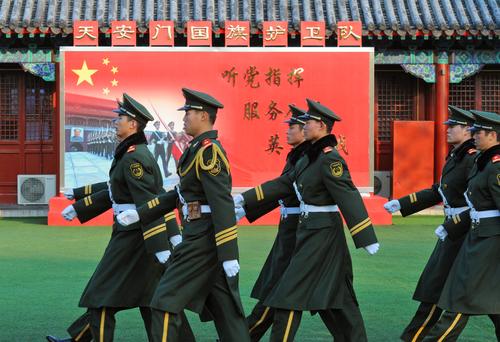 The scale of China’s military build-up has raised flags among Western alarmists. Yet the focus of the military spending appears to be oriented more towards defending China's periphery, rather than any expansionist plans. In fact, one common argument is that China’s growing military power is only meant to counter the force of the U.S., which has been increasing its presence in the region.

There is an excellent saying that encapsulates the relationship between war and economics in the modern world. It goes something like this: when trade moves across borders, armies don't. The European Union is, of course, the clearest modern example of the way in which trade encourages civilized bonds between countries who might otherwise be tempted to resolve differences through the exchange of bullets rather than goods.

China – as the world's second largest economy, and as a country on course to become the world's leading economy in twenty years or so – is at the heart of world trade, and is widely regarded as the engine that may yet prove sufficiently powerful to pull Europe out of its slow-to-no-growth quagmire. So, if our axiom has any basis in reality, it would seem wildly unlikely that China would pose a military threat to the West -or, indeed, to any region.

However, sometimes things just "happen", and not for the better. The link between politics and the military in China is so strong that some overt glorification of military prowess, along mildly fascist lines, is probably inevitable – which doesn't make it a smidge less dangerous.

China has already shown that it is prepared to counter Japanese nationalism over the Senkaku Islands, Diaoyu Islands if you are Chinese, with as much saber rattling as Japan wants to go in for. It is building up its naval capabilities in the South and East China Seas and that is a direct challenge to the U.S., putting the two largest economies in the world on something of a wildly unnecessary collision course. The new Chinese supremo Xi Jinping, or Head of the Politburo Standing Committee to give him his formal title, made the following point in his speech to the Chinese people: "To realize the great revival of the Chinese nation, we must preserve the bond between a rich country and a strong military, and strive to build a consolidated national defense and a strong military."

There has always been an alarmist cohort in Washington, as the bogeyman of the West, ready to elevate Beijing to the position once held by the Soviet Union; there is no shortage of seemingly sensible US politicians who get drawn into that kind of utterance from time to time. However, the scale of China's military spend and its enthusiasm for modernizing and extending its army is, at the very least, providing fodder for the alarmists and causing more than one otherwise well disposed commentator to pause for thought.

Wars Of Conquests Are Not In The Chinese DNA

China's last military 'adventure' was the short border war with Vietnam in 1979. Its interest in preserving North Korea as a buffer against US interests is understandable, even if neither China nor anyone else knows what the barking mad regime in North Korea is going to do next.

And then there is the fact that the Chinese Empire, pre-Mao, had virtually no extra-territorial ambitions. Wars of conquest are not in the Chinese DNA. Plus, there is the obvious point that China's trading power can get virtually everything it wants via trade partnerships, which are hugely more profitable than, for example, the kind of "let's go grab their cattle, castles and land" wars that English Kings went in for time and again.

In an article in Foreign Policy, Drew Thompson came up with a title and catch line that says it all – “Think Again: China's Military - It's not time to panic. Yet.”

"... China's leaders vehemently denounce any suggestion that they are embarked on anything other than what they have referred to as 'a peaceful rise' and haven't engaged in major external hostilities since the 1979 war with Vietnam,” Thompson wrote. “But they also don't explain why they are investing so heavily in this new arms race.”

“Beijing's official line is that it wants to be able to defend itself against foreign aggression and catch up with the West, as it was famously unable to do in the 19th Century [...] the first Gulf War served as a wake-up call in Beijing, raising concerns about how quickly an inferior army could be demolished by better-equipped Western forces [...] US and allied forces made short work of Iraq's Warsaw Pact military hardware, and the Chinese were duly shocked and awed."

Hence the military build up, or so the theory goes. Of course, if one looks at things from China's perspective, things look a bit different. A 2003 paper from the Cato Institute, Is Chinese Military Modernization a Threat to the United States, makes the following point:

"... the United States has ringed China with formal and informal alliances and a forward military presence. With such an extended defense perimeter, the U.S. considers as a threat to its interests any natural attempt by China – a rising power with a growing economy – to gain more control of its external environment by increasing defense spending. If US policy makers would take a more restrained view of America's vital interests in the region, the measured Chinese military build-up would not appear so threatening."

China's Military: Not As Scary As It Looks

Interestingly, according to an analysis by Eric Arnett entitled Military Technology: the case of China, prepared for the prestigious Stockholm International Peace Research Institute, while the bond between the party and the military appears to be working well for the military, in that the Party seems prepared to provide a handsome level of military funding – the Chinese Communist Party's way of doing things is, paradoxically, stifling technological innovation for military hardware.

He argues: "China will not be able to take full advantage of what it has achieved unless the control of the Communist Party is relaxed, and even this will not be a sufficient condition for a better exploitation of technology."
Nevertheless, Arnett cites Pentagon reports that confirm that:

"China's A2/AD (area access and area denial) focus appears to be oriented towards restricting or controlling access to China's periphery, including the Western Pacific. China's current and projected force structure improvements, for example, will provide the People's Liberation Army (PLA) with systems that can engage adversary surface ships up to 1,000 nautical miles from China's coast."

Related: Two Visions: US and Chinese Rebalancing in Asia

Related: Are Sino-US Ties Still The World’s Most Influential Relationship?

One could argue that this shouldn't particularly bother the U.S., which has long had the ability to project force across the globe – but it does bother the U,S., and that is not good. As ever, we live in a dangerous world and global commerce and global financial flows are probably the best antidote we have to idiotic arms races and military posturing.

China and military muscle: a high wire act or a folly? is republished with permission from the QFinance Blog.