China’s Quest To Integrate With Southeast Asia: A Win-Win Relationship? 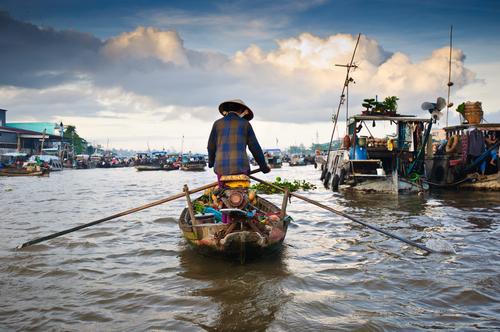 China has been rapidly expanding its efforts to connect politically and economically with Southeast Asia – particularly in the Greater Mekong Subregion (GMS). While China is benefiting more their relationship with the GMS at the moment, the GMS will be able to achieve greater sustainable development as long as they are more strategic and selective in dealing with their big neighbour in the north.

Driving out of the Wattay International Airport in Vientiane, Lao People’s Democratic Republic (PDR), one sees a large billboard featuring the overseas campus of Suzhou University in the People’s Republic of China’s (PRC).

In a coffee shop in Vientiane, the first author met two PRC businessmen who talked about the prospect of a new venture to extract copper in northern Lao PDR.

Just across the border from the PRC in Boten, Lao PDR, the second author talked with a local Lao driver in Chinese about the trucks full of fruit from Thailand parked minutes away from the PRC border checkpoint near the PRC-built casino ghost town that once ruled the area.

And on the outskirts of Yunnan’s capital city of Kunming, the PRC’s fourth largest airport behind Beijing, Shanghai, and Guangzhou, Changshui International Airport, was opened in mid-2012.

While seemingly disparate, these anecdotes reveal the ambition of the PRC’s “Go Southwest” strategy to politically and economically connect Southeast Asia to the PRC.

Integrating with Southeast Asia is a key component of the PRC’s approach to multi-pronged regionalization. PRC-instigated globalization and regionalization unleashes a dual process of de-bordering and re-bordering in which the traditional barrier role of borders is yielding more to that of bridges. As a result, once small, marginal, and remote border cities and towns have become larger and lively centers of trade, tourism, and other flows.

The PRC’s effort to engage Southeast Asia leaves many local footprints within and beyond the cities of the Asian Development Bank(ADB)-facilitated Greater Mekong Subregion (GMS), which was launched in 1992 and consists of the PRC’s Yunnan Province (with the later addition of Guangxi Zhuang Autonomous Region), Cambodia, Lao PDR, Myanmar, Thailand, and Vietnam.

The PRC’s trade with each of the GMS countries has grown since 1990, most rapidly since 2000. Yunnan’s advantageous geographic location has helped the province’s GDP skyrocket from $31 billion in 2000 to $165 billion in 2012, and even stronger cross-border economic and trade ties will promote the province’s goal of doubling that to $329 billion by 2017.

Urban development is playing a leading role in stimulating this growth, and it is emerging as a polity priority for the GMS in the next phase of development. On 6 May 2011, the PRC’s State Council issued the document entitled, “Supporting the Accelerated Construction of Yunnan as the Important Outpost for the Southwest Region.” This is a critical part of a broader ambitious PRC plan to build up Kunming as a comprehensive center of trade, transportation, tourism, education, and R&D that reaches the bordering countries of Lao PDR, Myanmar, Vietnam, and beyond.

Yunnan provincial and Kunming municipal governments have introduced a variety of related policies and projects with important connections to and implications for the GMS. One such project aims to build a central Yunnan regional economic circle knitted together by the four cities of Kunming, Qujing, Yuxi, and Chuxiong, with Kunming as the core—thus creating a four-city cluster.

According to official statistics, an estimated 30,000 Myanmarese either come through the border daily or take up a long-term presence in Ruili. This is roughly equivalent to 17 percent of the city’s total population of 180,627 in 2012. Not limited to Myanmar, over one-third of the urban population in Ruili is foreign, the highest proportion in the country.

Not long ago, we talked with two young Myanmarese women of Chinese descent from the border town of Muse working as migrants in two different bookstores in Ruili. At the same time, we interacted with many migrants from Myanmar who have become more settled residents in Ruili and formed a distinctive local community, with its own grocery stores, coffee shops, hair salons, and long-distance telephone service. The PRC even provides electricity and mobile phone service to Muse, allowing the Myanmarese in Ruili to phone their family and relatives in Muse as local calls.

To facilitate trade along and beyond the PRC’s long border with Myanmar, Lao PDR, and Vietnam, the PRC has been extending its tentacles of transport infrastructure to the GMS. The PRC has also intensified its varied efforts to secure the rich natural resources in the region. However, it stirred up controversy in generating more hydropower by building dams on the Lancang River in Yunnan, which forms the upper reaches of the Mekong River.

The PRC has also begun to extend its sphere of political influence in the GMS. When a Myanmarese drug lord massacred 13 PRC sailors on the Mekong River, the PRC worked closely with Myanmar and Lao PDR police to capture and later execute Naw Kham, the alleged mastermind. And despite having run into some resistance by local farmers in northern Myanmar living near the route of the PRC–Myanmar oil and gas pipeline, which starts at Kyaukpyu port on Myanmar’s coast and enters the PRC at the city of Ruili, the pipeline started to deliver natural gas to the PRC in July 2013.

The PRC’s growing engagement in the GMS is motivated by how state policy and market forces have intersected with and reinforced each other, with Beijing playing a larger role. As the PRC has pushed its national “Go West” development strategy forward, Yunnan Province has become the focal region for accelerating southwestern development, and Kunming emerged as its most important hub for generating and spreading regional development benefits.

]Strengthening economic and physical ties with the GMS became an extension of the PRC’s regional and international development strategy for securing more market opportunities in trade, investment, infrastructure, and energy. This process is fueled by the more active market processes of cross-border trade, migration, commuting, and tourist activities.

The PRC appears to be benefiting more from its growing relationship with the GMS, in two ways. First, due to its sheer economic size and political influence, the PRC has spread its presence and footprint widely in the GMS and thus has been a key driving force of the subregion’s development and integration. Second, the PRC occupies the higher end of the development spectrum and thus can gain more value added through setting more self-favoring terms for trade and infrastructure projects.

While the GMS countries may benefit from new economic opportunities tied to the PRC, they (except for Thailand) are generally in a less advantaged position in dealing with the PRC due to their weaker political position and less developed status.

Given its favorable position in relation to the GMS countries, the PRC’s central, provincial, and local governments need to cooperate and coordinate more effectively with each other in developing and sustaining a broadly balanced and equitable relationship based on mutual political trust, complementarities in economic development, and the advantages of geographic contiguity and proximity.

This calls on the PRC’s key stakeholders in relation to the GMS, the GMS as a whole, but especially Lao PDR, Myanmar, and Vietnam, to consider the following policy approaches:

1. Create city clusters or circles within and across the GMS boundaries that make them collectively more competitive and synergistic by enhancing inter-city cooperation within the subregion.

2. Encourage the national governments of the GMS to use targeted policies and other leverages to empower these connected and clustered cities to work together horizontally by means of inter-local institutional and informal ties.

3. Further strengthen and enlarge the geographic scope of existing trade and other economic connections between any pair of or other linked border cities.

4. Scale up and out the related and complementary nature of the above by completing the major and multi-modal transportation networks that can link city clusters and border trade dyads into urban development corridors and eventually elevate their converged benefits to the GMS level.

No doubt the PRC’s rapidly growing economic and political muscles in the region attract the world’s attention, but the other five GMS countries, specifically Cambodia and Lao PDR, are also growing rapidly by catching up to and learning some lessons from the PRC’s development experience and trajectory.

Related: Two Visions: US and Chinese Rebalancing in Asia

The GMS countries will continue to perform well, but can do even better by being more strategic and selective in dealing with the PRC across their northern borders. Ultimately it is up to all six member countries of the GMS, and not just the PRC, to determine how to compete and yet cooperate to achieve greater sustainable development.

If a win-win relationship between the PRC and the other five GMS countries can be developed and sustained, the economic and political landscape of the Mekong Region will be forever reshaped with benefits for all.

Chen Xiangming is the founding Dean and Director of the Center for Urban and Global Studies and Paul E. Raether Distinguished Professor of Global Urban Studies and Sociology at Trinity College in Hartford, Connecticut, and a Distinguished Guest Professor at Fudan University in Shanghai. Curtis Stone is a translator and editorial adviser at Central Compilation & Translation Bureau in Beijing, China.

The PRC in the Greater Mekong Subregion: Economic and political implications is republished with permission from Asia Pathways – a blog of the Asian Development Bank Institute.

See also: Two Visions: US and Chinese Rebalancing in Asia