•
United States
•
by
The Conversation 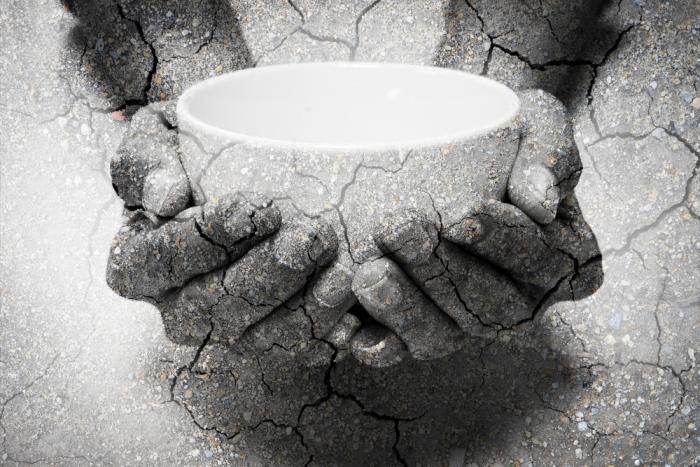 Altogether, about 14 percent of U.S. households – roughly 48 million people or one in seven Americans – go hungry at some point during the year, and not because they are trying to lose weight. This number actually underestimates the problem because the survey excludes the homeless and transients; groups that almost by definition lack enough food.

Given the size of the problem, you might think it’d be a prominent issue on the campaign trail this year.

Yet none of the presidential candidates discusses this issue, even as they attend endless breakfast meetings, lunch roundtables and dinner fundraisers. It doesn’t seem to be on their minds, perhaps because they are surrounded by food. A Secret Service agent assigned to protect a candidate once jokingly told one of us the most dangerous part of the job was ensuring he didn’t die from overeating.

While the candidates, their staff and protectors are well fed, the news is not as good for the rest of the country.

In other words, why do we have such a tough time ending hunger in America?

If you are like most people, you know what it is like to think yourself, “I’m hungry.” You have probably said as much to a friend or family member.

In addition, your hunger is real. It is a feeling of emptiness caused by a lack of food.

However, being hungry in the moment – maybe you skipped breakfast or missed lunch – is not the same as hunger. Hunger is not knowing if there is a next meal, which is quite different from being temporarily hungry.

According to the USDA’s Economic Research Service, these food-insecure households respond to hunger and food insecurity in various ways. They eat a less varied diet, they participate in federal food assistance programs and they turn to emergency food programs including community pantries. Hungry families juggle expenses. They trade one kind of insecurity for another and forego payments for utilities in order to buy food.

Hunger has been with us for eons. Not so long ago, people suffered hunger because their crops failed, there were no animals to hunt or there was a climate catastrophe. A drought, rains or rain that arrived at the wrong time were just some of the climate events that might cause hunger.

Not only are the numbers large, the Department of Agriculture survey shows the percentage of households experiencing food insecurity has climbed slightly since 1995. This is shocking since the overall U.S. economy has grown roughly 60 percent over the same period, indicating economic gains alone are not improving the lives of the most vulnerable.

The survey tracks hunger each December by asking if the following statements apply:

* “We worried whether our food would run out before we got money to buy more.”

* “The food that we bought just didn’t last and we didn’t have money to get more.”

Does the U.S. grow enough food?

Is the reason for such large numbers of food-insecure people that U.S. farmers are not growing enough?

Data from a special program that monitors food availability show the answer is no. For example, the U.S. produces about 200 pounds of grains like wheat, rice and oats; 250 pounds of red meat and poultry; and 200 pounds of dairy products each year for every person in the country. The typical hiker needs about two pounds a day when active outdoors. That means using just the three categories noted would provide enough food to satisfy the average person – and that’s ignoring fruits, vegetables and everything else the U.S. grows.

Not only does the U.S. produce far more food than it needs, it could grow much more. Farmers enrolled in the Conservation Reserve Program are paid each year not to use their land. The program annually pays about US$1.7 billion a year to ensure 24 million acres are left fallow.

This means taking more land than the entire state of Indiana out of production annually. We often think of hunger as something happening far away, but many Americans are also food insecure. Reuters

So why are people still going hungry?

Given how bountiful the U.S. is, why does hunger remain a problem? Poverty and lack of access to resources are two of the key forces defining hunger in the U.S.

The link between poverty and hunger is clear. Approximately 40 percent of families living below the federally mandated poverty rate ($23,850 for a family of four in 2014) were hungry that year. Households with children, single parents and those living below the poverty line are at particular risk.

In Child Food Insecurity: the Economic Impact on our Nation, John Cook and Karen Jeng note that hunger and food insecurity are a health issue. Hungry children are more likely to be sick and developmentally impaired. In other words, hungry children do not live up to their potential.

Food deserts, areas that lack grocery stores, farmers’ markets and access to nutritious foods, are a problem across our nation.

Recall the last time you went grocery shopping. Did you take a cab or drive yourself?

For Americans who lack cars, it is a challenge to find transportation to and from a market. Traveling home with bags of heavy, perishable goods (think of carrying a gallon of milk to and from a bus stop) is not easy. Add in the time constraints of work, childcare and maintaining a home, and the challenge grows even more overwhelming.

However, the challenge of hunger is not simply an urban or ethnic problem. Food deserts are a problem for rural Americans and are concentrated in the south.

Rural Americans may live hundreds of miles and many hours from a grocery store or a source of nutritious foods. In fact, more than 50 percent of all food-insecure households are found outside of metropolitan areas.

Can we end hunger in the U.S.?

Unfortunately, there is no way to prevent hunger. It is a problem that will persist. Yet we do have some ways to fight hunger and, with luck, reduce food insecurity.

Aid is a good place to start. By donating our time, money and food to local charities, we become part of the solution. However, charity doesn’t address the bigger challenges the hungry face.

Hunger is about health care, poverty and education. Ending hunger and food insecurity requires investing more money in these areas and enacting policies that reduce unemployment and lift wages.

We can also reduce food insecurity by improving public transportation and other infrastructure to make it easier for grocers and farmers to get nutritional food to the people who really need it.

No one should go hungry or feel insecure about their next meal in the U.S. in the 21st century. As the 2016 presidential campaign slogs on, we can be part of the solution by both giving of ourselves and asking our leaders to address this vital issue and promote food security as a sacred right for all Americans.

Are people in the U.S. getting enough to eat? is republished with permission from The Conversation