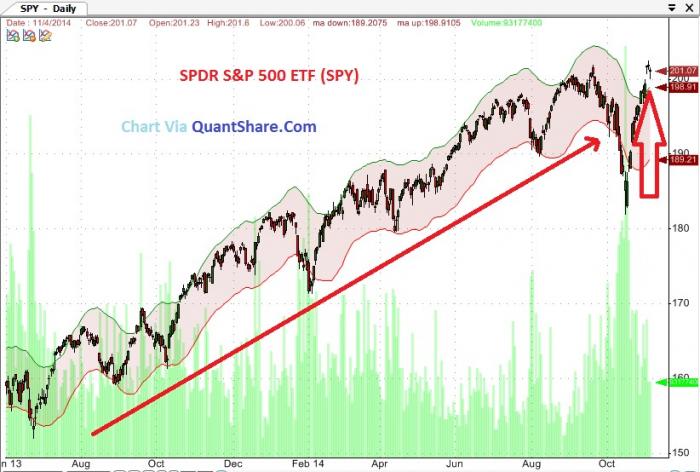 The S&P 500 ETF (SPY) is up more than 10 percent over the last 20 days, representing one of the biggest advances in a comparable period. This comes after the U.S. Federal government continued to report impressive economic data, which signifies increased optimism for economic recovery.

Last week on Oct 30, the U.S Federal government released GDP data for the third quarter of 2014, which beat expectations. The 3.5 percent GDP growth for Q3, declined from Q2’s 4.6 percent but beat analyst forecast of 3.0 percent, thereby sending the equities market on a rampage. All the major indices are up significantly compared to figures from a fortnight ago.

The SPDR S&P 500 ETF (SPY) has been on an upward trend for the majority of time over the last two years despite a few pullbacks. During the same period, the U.S has shown great optimism on economic outlook by continuously cutting QE (Quantitative Easing). Last month, the Federal Reserve finally ended the program.

While QE was crucial in rallying stocks during tough economic times, it appears as though little has changed after the U.S ended the program at the end of October. QE meant low interest rates and consequently, investors were willing to invest in risky instruments. However, with QE gone, the perspective is that in the near future base interest rates will go up. This again presents investors with the opportunity to gain more on their investments.

However, in order for the U.S to raise its base interest rates, which many see going up in early 2015, the economy has to remain on course to recovery. The economic growth rate must continue improving to a level that investors would consider sustainable and good for business.

Currently, International Monetary Fund numbers have 2.2 percent projected average growth rate (2014) and 2.3 percent (2015) for the developed world. The figures for the U.S are estimated at 2.8 percent and 3.0 percent for 2014 and 2015 respectively. Based on the current numbers, the U.S Economy appears to be doing perfectly well with regard to IMF estimates.

Nonetheless, considering the surprise decline reported in Q1, which many attributed to bad weather, the U.S economy will be under pressure to meet the current projections. Analysts are now bullish on the economy following it recently beat their estimates, and this puts a lot more pressure on the numbers for the next few quarters.

The SPDR S&P 500 ETF is currently on a short-term recovery trend following a plunge suffered between late September and early October. This came following the news that the IMF had cut its growth forecast amid signs of a slowdown in Europe. Therefore, the SPDR S&P 500 ETF could still nosedive due to pressure from other economic factors.

Additionally, the SPDR S&P 500 ETF also relies on the performance of individual companies listed on S&P 500 index. When these companies report strong quarterly results, like they did in the most recent quarter, this is bound to rally the ETFs associated with the fund. For instance, analysts are predicting the Q3 EPS growth for the S&P 500 index fund to grow by a little over 6 percent compared to the initial estimate of 11 percent reported in July.

If the S&P 500 beats those estimates, then the SPDR S&P 500 ETF is likely to react positively to the news. A miss on those estimates could be worse for the ETF, especially considering the recent downward revision.

After rallying over the last two weeks, the SPDR S&P 500 ETF along with other major indices seems to have slowed; thereby sending signals that the advance could be ending. This slowdown could continue over the next few months until after companies report Q4 results and the U.S releases another impressive data on economic growth.

However, for now, it appears as though the recent data from the U.S department of commerce is losing impact on the SPDR S&P 500 ETF. Investors will be watching for release of information related to the U.S economy for the next few months.

How Long Can The Recent U.S Economy Data Rally Up SPDR S&P 500 ETF? is republished with permission from Nicholas Kitonyi at QuantShare.com