Trade Deal Opposition Appears to be a Sign of the Times

As if to highlight that fact once again, Senate Majority Leader Mitch McConnell said recently that he would not bring the TPP to a vote until after the new president takes office in January.

That’s bad news for the trade agreement – and for President Barack Obama, who sees its passage as the final plank in his foreign policy legacy and who is pushing hard for a vote during Congress' post-election lame duck session.

However, the controversial Asian pact is not the only trade agreement potentially on the chopping block. Last month, the European Union’s trade commissioner, Cecilia Malmström, decided not to fast track the EU-Canada Comprehensive Economic and Trade Agreement (CETA) due to the anti-trade climate prevailing on the continent.

In addition, France’s President François Hollande just declared that his country would not support moving forward with the gigantic Trans-Atlantic Trade and Investment Partnership (TTIP) being negotiated between the U.S. and the EU. His announcement came on the heels of a statement by Germany’s vice chancellor that TTIP “has failed.”

It seems that every time we get closer to the conclusion and ratification of a trade deal, a new barrier emerges to block any progress. What, then, are we to make of the tremendous obstacles confronting these three major agreements? 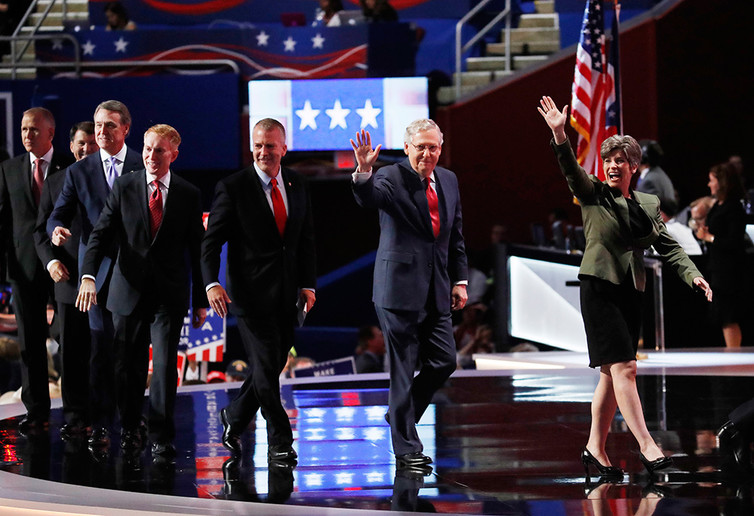 McConnell, second from right, has endorsed Trump, who has made anti-trade rhetoric a big part of his campaign. Jim Young/Reuters

The times they are a-changin'

First and foremost, opposition to trade is a sign of the times. The Great Recession, among other events, has generated strong pushback against globalization and liberal exchange, something that seems to have caught political elites around the world off guard.

The Doha Round of the World Trade Organization (WTO) had already come apart well before the recession. Its failure meant that a multilateral deal, one that would have committed nearly all of the world’s countries to the same trade agenda, was no longer possible.

At the heart of Doha’s collapse were the interests of the newly rising BRICS – Brazil, Russia, India, China and South Africa – which could not be reconciled with those of the U.S. and the EU. The failure of the WTO, in its turn, gave new impetus to regional agreements such as TTIP and TPP.

Initially, these regional agreements, along with their more modest bilateral cousins (deals between only two nations), were treated with suspicion by free traders, who feared that they would carve up the global trading system into inefficient blocs. However, in time, such agreements presented themselves as the best, and only, way forward in a more complex, multipolar economic environment.

Still, TTIP and TPP are more than just victims of the general skepticism for globalization that has arisen in the past few years. They are also the collateral damage from political events in the world’s major trading countries.

Illiberalism on the rise

First among these is the U.K.’s Brexit vote, which is likely to result in the country’s withdrawal from the EU. Brexit, which is itself the fruit of growing illiberalism in England and Wales, has distracted European leaders to such a degree that TTIP and CETA have moved onto the back burner.

Moreover, in the United States, the success of Donald Trump in mobilizing the anti-globalization working class has made Republicans in Congress, who typically support trade as good for business, wary of trade deals. It has also led Hillary Clinton to distance herself from previous statements supporting TPP made during her tenure at secretary of state.

Another problem facing TPP and TTIP is their unprecedented scope. Not only do these agreements create free trade blocs that encompass much of the world’s economic output, but they also touch on a variety of issues from internet freedom to generic drug prices to the right of private investors to sue states for compensation. Many of the most controversial elements of the agreements relate to these issues rather than to the traditional components of trade protection.

What would be the consequences if these agreements fail?

Economically, the U.S. is already tightly linked with both Asia and Europe. The TPP agreement would essentially expand the Pacific trade bloc beyond NAFTA to include nine additional countries, most significantly Japan. Similarly, TTIP would deepen the already significant economic interdependence that traverses the Atlantic.

The loss of these agreements would certainly have negative economic effects on all sides, as least in the aggregate (since some jobs would be saved by the reduced competition). Agreements this large cannot be jettisoned without consequences.

That said, given the deep connections that already exist among Asia, North America and Europe, the purely economic results of killing the agreements are likely to be important, but not enormous. More serious would be the geostrategic implications.

A rejection of TTIP by either side could signal a reduced U.S. presence in Europe, a particular concern in the face of increasing Russian assertiveness.

Meanwhile, an end to TPP could encourage a number of Asian countries, unsure of America’s future in the region, to move into China’s growing sphere of influence. It is no surprise that this last argument is the one being made most aggressively by the Obama administration.

If TTIP and TPP are not likely to be approved any time soon, does this mean that they are already dead?

A President Trump would certainly kill the agreements. If, however, Hillary Clinton becomes the next president, as the polls seem to indicate, their future is harder to predict. Clinton seems to be, at heart, a believer in open markets, but the current political situation makes it hard for her to say so directly.

If elected, Clinton’s statements during the campaign would make it difficult for her to support TPP out of the gate, especially with strong opposition from Bernie Sanders supporters. As envisioned by Cato trade analyst Simon Lester, she may well try to renegotiate a portion of the agreement as political cover and then resubmit it to Congress for approval.

By this point, if Trumpism has been defeated, Republicans may have a greater appetite for foreign trade. The question, of course, is whether the other TPP signatory countries will be willing to reopen portions of the agreement that have already been concluded.

Similarly, in Europe, it seems unlikely that much progress will be made until the Brexit issue is resolved and growth starts to pick up.

Despite all the obstacles, however, I believe that it is important to keep moving forward on free trade. The rejection of these important agreements could risk becoming merely the first step in a gradual erosion of support for the global economic architecture.

This architecture, so carefully created and maintained by the United States after 1945, has contributed mightily to international prosperity and peace. Maintaining it is of critical importance.

Does TPP’s slow death mean the world is now unsafe for trade deals? is republished with permission from The Conversation

See also: Trump Leads the Republicans to Splitsville on Trade