The Real Story about Real Wages

•
Economic Conditions
•
by
The Conversation 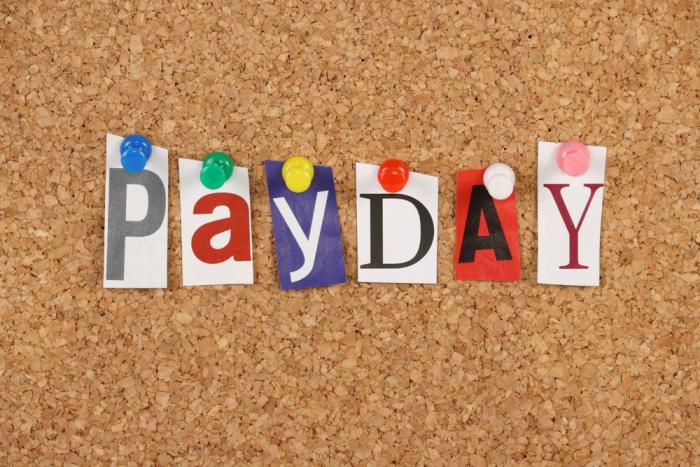 First, monthly jobs growth exceeded expectations, as employers hired 280,000 people. Second, the labor force participation rate ticked up, indicating that people who had stopped looking for work were becoming more optimistic about finding a job and thus had resumed their search for one.

Finally, average hourly earnings for all production and non-supervisory workers in the private sector grew by 2%, compared with May 2014.

Some people may question why wage growth of 2% would be considered good news. The reason is there was no rise in prices over that period, so the average real wage also grew by about 2%. In addition, it is the real wage, rather than nominal pay without accounting for inflation, that ultimately determines the living standards of the American worker.

While the first two highlights from the jobs report are indeed good news, this last one might be its most important takeaway – though it has been true for a few months now. We have been reading articles for years about how stagnant wages have been without focusing on the impact of the lack of inflation. In other words, while we are not making a lot more money, it should feel like more because consumer prices have barely budged since the financial crisis – by that measure, wages for most workers are the highest they have been in decades.

This matters because it suggests the economy is in better shape than we think and may be what the Federal Reserve has in mind as it considers raising rates this year, with many (including the International Monetary Fund) urging the central bank to wait until 2016.

One of the biggest risks, however, concerns productivity, which is truly stagnant. That and take-home pay are highly correlated, so if productivity does not pick up, the rise in real wages may well evaporate.

The consumer price inflation data for May will not be released until later this month, so the balance of this essay will focus on the real wage rate in the private sector through April – although I would not expect the story to change once we can evaluate the latest data. (Hourly wage data for government workers are not available.)

I would also like to focus on the economic prospects of middle- and lower-income workers, so I will be looking at the earnings of those in production and non-supervisory roles. This group accounts for 82% of all private sector workers, who on average earned US$20.91 an hour in April.

The average hourly real wage for this group since 2007 is shown below (converted to April 2015 dollars). The shape of this graph undoubtedly will surprise many readers given the widely held believe that the middle class has been falling behind economically. 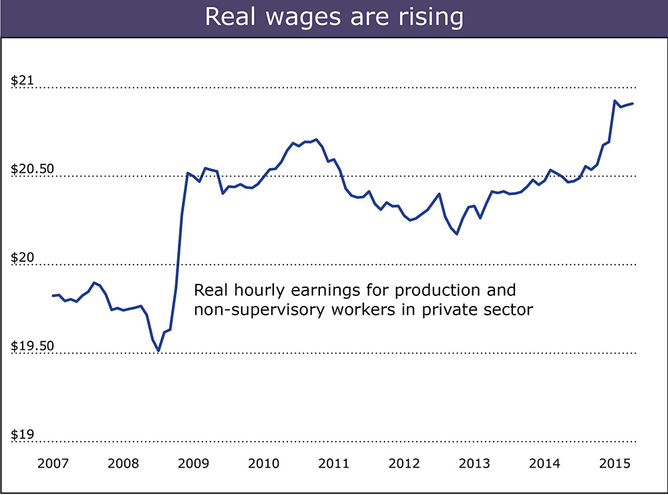 Real wages are now the highest since 1979. Bureau of Labor Statistics

The average hourly real wage did decline during the “Great Recession” and again in 2011 and 2012, but since falling to its recent low of $20.17 in October 2012 it has increased, first at a modest pace and then more rapidly since September as price inflation disappeared.

Perhaps even more surprising for most people is that the average real wage for these employees is now at the highest level since March 1979, although it is still 8.2% below the all-time peak ($22.27) reached in January 1973.

The average real wage for middle-class workers declined during the second half of the 1970s, the 1980s and the first half of the 1990s, reaching a low of $17.97 in April 1995 (data go back to 1964). Since then, wages have tended to slowly increase, with the largest gains when price inflation disappears and the greatest losses occurring when it spikes upward.

That brings us back to the most recent figures. During the 12 months through April, average hourly real earnings for production and non-supervisory workers increased by 2%. These wage gains are widespread among industries, as is shown in this table. 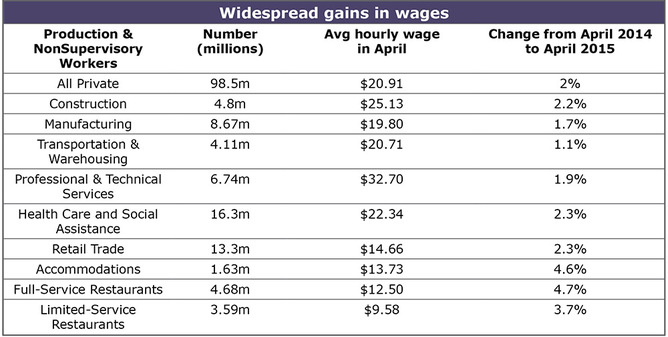 Real wages are up across the board over the past year through April. Bureau of Labor Statistics

So why are people so convinced that middle- and low-wage workers have been losing ground?

Many people point to the fact that the real hourly wage is less than it was in 1973, but that reflects the decline that occurred between 1973 and 1995. Since then, the average hourly wages have been on a slow upward trend, averaging 0.76% per year – not much, but positive all the same. Moreover, as I have shown, those gains accelerated in the past year, with even larger ones in lower-wage industries.

Perhaps the recent wage gains have yet to sink into people’s consciousness, and thus their assessment of the economy will shortly improve. In addition, millions of people are still unemployed or they have dropped out of the labor force, and their incomes have not benefited from the increase in average wages.

Alternatively, perhaps people are unhappy because they are comparing their financial situation with higher-income households, who have done even better, although income inequality is only slightly worse than it was in 2000, when the middle class seemed much happier (see the excellent work of Berkeley’s Emmanuel Saez).

On the other hand, maybe it is something as simple as our spending desires outpacing the growth in the real wage rate. People clearly were spending a lot of borrowed money through 2007, when the financial crisis sharply curtailed many people’s ability to borrow and spend.

What I do know, however, is that unless productivity growth improves, the real wage gains that the data show will prove fleeting. Then we really will be in a world of hurt.

Last month’s US employment report, released on Friday, contained a lot of good news is republished with permission from The Conversation

See also: There is More to the Minimum Wage than a "Living Wage"