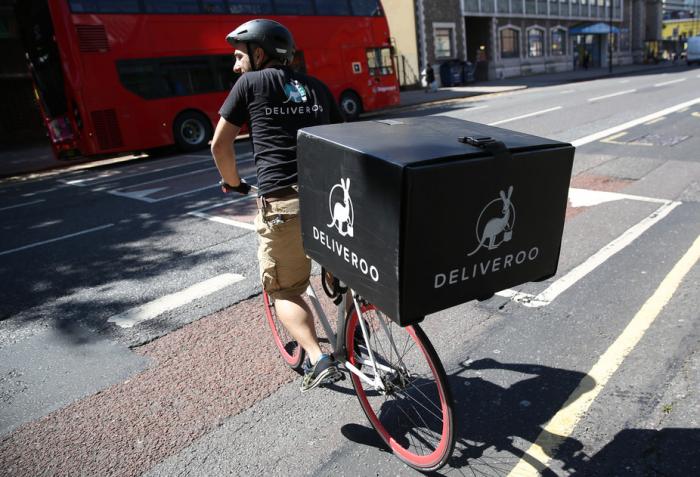 Deliveroo couriers scored a win this week after strike action helped them get their old pay rate back. Reuters staff

The standoff between couriers of food delivery service Deliveroo and the company’s owners is a standout case of workers using different methods to fight back in an emerging economy with loose employment relations.

Deliveroo is a UK-based meal delivery company. Its partners include many popular chains that had not offered a delivery service before. It has grown rapidly, expanding into 12 countries in just three years. Couriers working for Deliveroo are becoming a common sight as they weave through the evening traffic.

When Deliveroo proposed a change in courier pay structure, hundreds of Deliveroo’s teal-jacketed riders took to the streets of London. The original rate of £7/hour plus £1 per delivery was going to be reduced to £3.75 per delivery. Riders very quickly calculated that they would not be able to achieve a sustainable income without working longer hours or rushing.

After a standoff, lasting six days the dispute was resolved largely in the riders' favour. The proposed pay-per-delivery structure will now be optional and any rider who had made the switch is allowed to opt back out.

Once the strike began, the riders were aided by the Independent Workers of Great Britain (IWGB). IWGB was founded just four years ago by former members of older unions UNITE and UNISON. It got involved despite the riders' nontraditional employment status. Older unions have been reluctant to engage with companies like Deliveroo, preferring perhaps to pick battles on more familiar ground.

The riders set up a crowdfunded strike fund that had raised more than £10,000 by the time the strike was called off. Uber and Lyft drivers in the US have taken this to the next level; they have set up an employee-owned alternative app called Juno, which pays drivers higher rates.

The UK’s Tory Government took the unusual step of backing the strikers, saying Deliveroo should pay a living wage. After this, management was left with little choice but to back down.

Not an isolated case

Deliveroo is not the only app-based company to face protest by their workers, although this was the first case in which the workers substantially won. Collectively companies such as Deliveroo, Uber and Airbnb are often referred to as the “gig economy”. People who work for them are engaged in a loose arrangement that resembles employment in some ways but not others.

A direct comparison exists in the traditional transport and logistics sector where performance pay has been directly linked to road fatalities due to the time pressures it creates. As far back as 1989, one coroner investigating fatal road accidents in NSW dubbed performance pay for drivers “decidedly unhealthy”.pdf).

The capacity of Deliveroo riders to inflict injury on other road users is obviously at a different scale. However, payment-per-delivery could prove a “decidedly unhealthy” outcome that would only encourage riders to take risks.

New technology and the app-based economy played its part in the Deliveroo victory but the victory itself was based on a much more timeless concept: that the power of workers lies in their capacity to withdraw their labour. The significance of a win based on such an old-fashioned notion cannot be overestimated.

Some commentators have credited the gig economy’s growth to a trend towards worker individualism but the Deliveroo strike suggests collectivism still works.

Strike action in the UK and in Australia is historically very low (2.6 days lost per 1000 employees in the March quarter 2016), making the Deliveroo strike significant.

“Wildcat” strikes like this one are not initiated through recognised unions or using established legal processes. They occur outside of the formal industrial relations system without the protections such systems afford, but also circumventing their constraints.

In recent years wildcat strikes have mostly been associated with campaigns for better wages and conditions by workers in developing or non-democratic countries such as China and Vietnam where there is limited capacity to engage in legal industrial action or other forms of grievance settlement.

The actions of Deliveroo riders and other groups in the gig economy such as Uber drivers suggest these workers, though often located in developed and democratic countries, also feel compelled to take actions outside existing systems.

The lesson here may be as much for business as it is for other groups of “self-employed” gig workers. If businesses attempt to place themselves outside of existing frameworks that ensure minimum labour standards through creatively classifying their employees as self-employed, their workers may also look to remedies outside of legal avenues. In addition, every now and then they may just win.

See also: How did Uber and its Drivers Win?