Russia Looks at the Bigger Picture when Assisting Syria

•
Russia
•
by
The Conversation 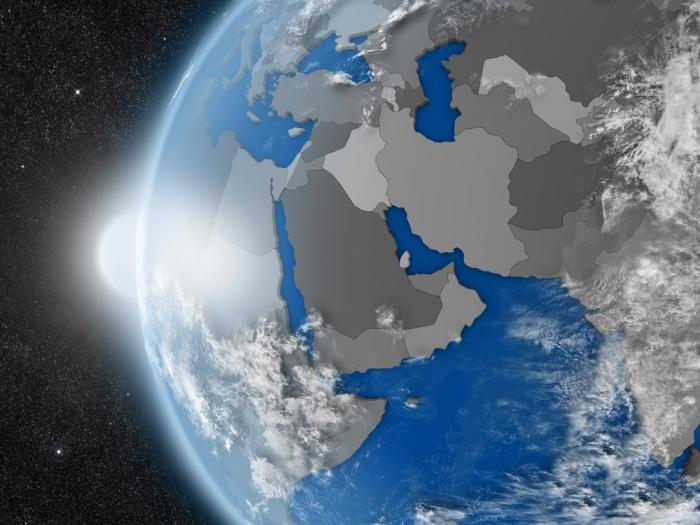 The sudden launch of Russia’s military operations in Syria late last month caught the United States and regional players by surprise.  It began with an announcement that defined the primary objective of the mission as a confrontation with the Islamic State (ISIS) in cooperation with the Syrian government of President Bashar Assad.

The strategy involves three components. First, Russia is expanding its military facilities in Syria. Second, Russia remains committed to the survival of Assad’s regime and its fight against ISIS in Syria. Third, Russia announced an intelligence sharing and flight corridor agreement with Iran and Iraq.

So far, Western governments and commentators have focused on the first and second components of the new Russian strategy. The third part, however, is equally significant for the course of geopolitical developments in the region and deserves a more detailed analysis.

The balance of power tilts

This agreement serves two important objectives. It enhances the capability of all three governments in their fight against ISIS. It also creates a valuable flight route between Russia and Syria. Since some European countries, such as Bulgaria, have closed their space to Russian military flights, access to Syria via Iran and Iraq is crucial for Moscow’s Middle East strategy.

Russia has already used the air space of Iran and Iraq not only for flights to Syria but also to fire cruise missiles from the Caspian Sea at several Syrian targets.

While so far the objective of this Russian cooperation with Iran and Iraq is relatively modest, it can have significant implications for US relations with both countries. It will also be significant for Turkey and the relative balance of power in the ongoing proxy war between Iran and Saudi-led Sunni countries.

The impact of this Russian strategy in Iraq will be mostly on domestic politics and the relative balance of power among competing factions in Baghdad. For Iran, on the other hand, the cooperation with Russia will primarily affect the foreign policy environment and the dynamics of its ongoing tensions with United States and Saudi Arabia. Let us look at some of these implications in more detail.

Iraq: a battle of benefactors

Iraq’s decision to participate in this agreement was supported by only some factions in Iraq’s fragmented political scene.

The disagreements about joining this accord represented the latest episode of the struggle between Iraq’s Shiite prime minister, Haider Abadi, who seeks stronger coordination with the United States, and his Shiite rivals, who are suspicious of the American role and prefer to rely on Iranian (Shiite) support. These factions believe that the US could have done more to fight ISIS and Sunni militants. They also advocate closer ties with Iran and now Russia.

During the last couple of months, Abadi sought to strengthen his position by adopting a reformist agenda and increasing coordination with the US military in the battle of Anbar. He was getting closer to adopting a version of the US plan to establish the Provincial National Guards as an autonomous Sunni force. Iranian-backed militias in the Popular Mobilization Forces (PMF) rejected this initiative and even issued a common statement opposing further American involvement in the military effort against ISIS.

In this context, the agreement seems to have challenged the course that Abadi has recently taken, which raises serious questions about the extent to which the prime minister controls major military decisions. A report published on September 30 by the Lebanese newspaper al-Akhbar, known for being close to Iran-backed Hezbollah, confirmed the escalating tension between Abadi and his rivals.

According to the report, Abadi was trying to minimize the scope of cooperation in this agreement and reduce it to the exchange of intelligence. He also insisted on having full authority in appointing Iraq’s representatives in the common committee established in Baghdad and included military representatives from the four countries (Russia, Syria, Iraq, and Iran).

This report also claims that Iran’s military consul in Bagdad will head the committee. In turn, powerful groups within the PMF, such as the Badr Organization and other Iranian-backed Shiite militias, demanded to have the right to choose their own representatives.

Russia itself has long sought to restore its strategic and military relationship with Iraq.

In recent years, Russia has offered a large array of military hardware to Iraq that the US has refused to sell it (such as military helicopters in 2013 and Su25s fighter aircraft). If Russia proves effective in enhancing Iraq’s security against ISIS and Sunni militants, it will strengthen its military and economic ties with Iraq at the expense of pro-Western factions of the Iraqi political elite.

Furthermore, if the conflict escalates and Russia demands more logistical and ground force support from Iraq, the ability of the government to accommodate both US and Russian military involvements and maintain a coordinated anti-ISIS strategy would be greatly weakened.

The Shiite-dominated government might use the Russian involvement, which comes without obligations on its internal politics, to confront US pressures to adopt a more inclusive policy toward the Sunnis. But if Iraq increases its dependence on Russian support, Abadi’s pro-US position may be weakened and so might his ability to survive politically. Hence, if this coordination does not yield quick results, it might well cause further internal divisions.

Iran: growing leverage over Russia and the region

Differences exist between hardline conservatives and the more pragmatic faction led by President Hassan Rouhani over the extent of cooperation between Iran and Russia. Yet there appears to have been little opposition to the agreement to share intelligence and permit Russian military aircraft access to Iranian airspace.

Through a number of high-ranking military visits in recent months, Iran encouraged Russia to take a more active role in support of the Syrian regime. It was also instrumental in securing Iraq’s cooperation.

If Russian involvement in Syria intensifies, which seems to be the case, it will have to expand its military cooperation with Iran. This will give Iran more leverage in its economic and military relations with Russia.

There are already indications that additional ground troops that Iran and its regional allies will complement Russian air operations against opponents of the Assad regime. Under these circumstances, Russia will be more likely to accept Iran’s longstanding request for the S-300 air defense system and other advanced systems.

Furthermore, if the US concludes that Iran has violated the recent nuclear agreement, it will find it more difficult to seek Russian support for a new round of international sanctions as long as Russia relies on Iran for the success of its operations in Syria. For the same reason, Russia is likely to boost Iran’s defenses against any attempt by the US to carry out military operation against Iran’s nuclear assets if the deal fails.

Iran’s cooperation with Russia will also strengthen its position in the ongoing proxy war with Saudi Arabia and its allies. Not only will it become more difficult for Saudi Arabia and Turkey to remove the Assad regime, however they will be more hesitant to escalate the level of current tensions with Iran.

Previously, if the proxy war with Saudi Arabia were to escalate into a direct military confrontation, the Saudis would have had the upper hand militarily by relying on the support of the United States against an isolated Iran.

It is for this reason that Iran has carefully avoided an escalation with Saudi Arabia and refrained from confronting its military operations in Bahrain and Yemen.

Closer military ties with Russia and access to advanced Russian military hardware might, however, alter the balance of power and make Iran more willing to challenge Saudi operations against its allies.

Finally, Iran might also be able to secure Russian support for several other demands.

For more than a decade, for example, Iran has sought to join the Shanghai Cooperation Organization (SCO) as a full member, but Russia and China have accepted it only as an observer nation. Russia now is more likely to support Iran’s bid for full membership. Admitting Iran as a full member means it will be able to rely more on strategic support from Russia and China in future tensions with the US and its European allies.

For as long as Russia’s military operations in Syria continue, it will have to rely on the cooperation of Iran and Iraq. As a result, it will have to be more sensitive to these countries' demands for diplomatic and military support.

This Russian support, in turn, will strengthen the regional position of Iran and its allies in Iraq, and is likely to weaken Prime Minister Abadi and reduce his influence in domestic and foreign policy decisions.

See also: A Tale of Changing Equations: China and Russia