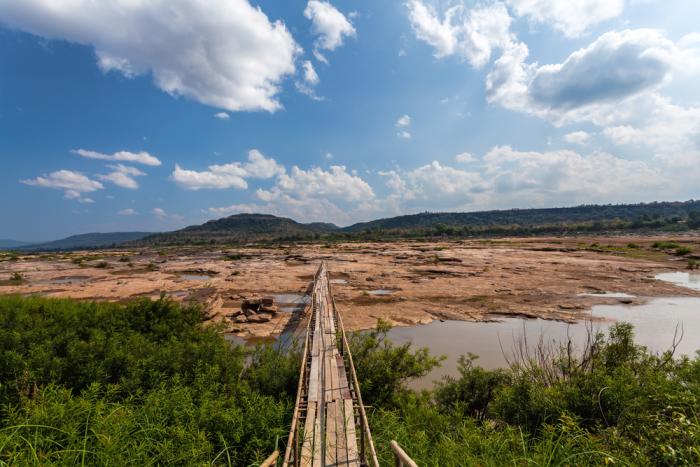 As Vietnam suffers its worst drought in nearly a century and Cambodia faces a water shortage that could jeopardise the livelihoods of 1.5 million people, debates have been reignited over the mega dams built along the Mekong.

Once referred to as ‘one of the world’s last great stretches of undammed river‘, the Mekong could well become one of the most dammed rivers in Asia. By 2030, 70 dams will reportedly be operational. These projects will bring new sources of wealth to upper countries such as China and Laos — the latter aims to become the electricity-exporting ‘battery of Southeast Asia‘.

However, the International Centre for Environmental Management believes the dams will cause an ‘irreversible loss of environmental, social and economic assets‘.

The hardest hit countries will be Cambodia and Vietnam, as their economies are strongly linked to the river. Fisheries in the Mekong account for 12 percent of Cambodia’s GDP and provide its people with a vital source of nutrition.

The Vietnamese part of the Mekong Delta, the Cuu Long region, accounts for 33 percent of Vietnam’s prosperous agricultural sector and 90 percent of its rice exports, which are the third largest in the world. The Strategic Environmental Assessment Report for the Mekong River Commission (MRC) shows that the effects of mainstream hydropower dams on these sectors will be devastating.

However, to simply prevent the construction of dams in upper countries would be shortsighted. For a poor, landlocked country like Laos, hydropower development is not a bad way out of poverty. The MRC estimates that Laos would receive 70 percent of the export revenues (US$2.6 billion per year) generated by the mainstream dams once all are operational. In addition, China, an energy-hungry juggernaut, badly needs electricity for its own development.

Cambodia and Vietnam have hydropower dams of their own on the Mekong, both on the mainstream (Cambodia) and on major tributaries (Vietnam), undermining their stance against China and Laos creating further dams. The controversy surrounding the Mekong’s hydropower dams is complicated further by the lack of effective mechanisms for regional water cooperation.

Presently, the best-known cooperation mechanism is the Mekong Agreement, which was signed by Vietnam, Thailand, Laos and Cambodia in 1995. However, the agreement cannot persuade China, arguably the most important partner, to join. In addition, its implementation organisation, the MRC, can only be described as a technical advisory agency.

It can advise governments, but has no enforcement power. It is easy to understand why the MRC has repeatedly failed to stop Laos from breaking the rules and going ahead with hydropower development plans.

In the midst of the recent water crisis in lower Mekong countries, China has offered to release water in the Jinghong hydropower station in Yunnan province from 15 March to 10 April following a request from Vietnam. This signals China’s willingness to advance cooperation with other Mekong countries. In addition, it gives hope to the new Lancang–Mekong Cooperation Mechanism (LMC), which China initiated in 2015.

The LMC is nothing if not ambitious. It covers five expansive strategic areas: connectivity, production capacity, cross-border economic cooperation, water resources, agriculture and poverty alleviation. Yet it remains questionable whether the mechanism’s ambition can be realised without clearer rules, such as a code of conduct.

Just how this new mechanism will be able to mediate conflicts of interest between parties is yet to be seen. Even the initiative’s name was the source of much debate: should Lancang (the river’s name in China) or Mekong come first?

The lack of binding rules and the absence of agreement from China also paralyse other mechanisms, such as the Lower Mekong Initiative promoted by the United States and the Japan–Mekong Cooperation.

Two steps must be urgently taken by all parties to solve the Mekong dilemma.

First, the four MRC signatories need to clarify which rules in the Mekong Agreement they consensually agree to follow. Though the treaty is not legally binding, it is the only regional agreement with a clear charter that can be used as a code of conduct for signatories. To date, no country — even Laos — has defied the agreement. Rather, countries have exploited its vague terms to defend their interests. Following this step, Southeast Asian signatories will be in a stronger position to negotiate with China, and to some extent Myanmar, in the LMC.

Second, Mekong countries should be called upon to join the UN Watercourse Convention. This internationally accepted framework, with clear rules and obligations, will facilitate a better mechanism to address issues of Mekong cooperation. At present, only Vietnam has signed the convention.

In the face of a water-scarce future, superior management mechanisms for transboundary rivers such as the Mekong are urgently needed. These require the countries involved to be ready to make rational concessions, to agree on a rule-based management framework and to push for more regional economic integration. Mekong countries must aim for what is known in China as ‘shared river, shared destiny’.

See also: China's Control of the Mekong is Upsetting its Neighbors