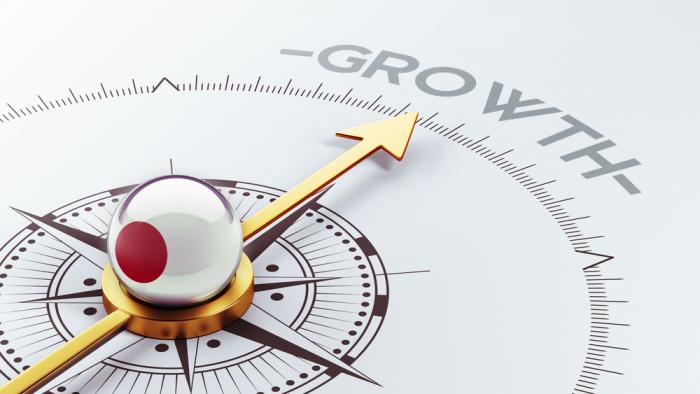 On the other hand, a vertical investment–savings curve in the Japanese economy prevented the growth of corporate bank loans. Except for a few periods, the 2% inflation target could not be achieved. This paper examines this phenomenon, presents the reasons behind it, and offers solutions.

Oil prices dropped from over $100 per barrel in June 2014 to less than $30 per barrel in February 2016. Since early April 2016, prices started to increase again because of a fragile improvement in demand, but the priced reached was still less than half of 2014.

There are several reasons for this sharp drop, relating to the supply and demand conditions and expectations in the oil market (Yoshino and Taghizadeh-Hesary 2016b). Oil prices have a high impact on Japanese macroeconomic variables especially on price determination, because every year Japan spends almost $150 billion (23% of the country’s imports in 2015) on mineral fuels, including crude oil.

In 2013, the BOJ set a price stability target of 2% (year-on-year rate of change in the consumer price index). On 4 April 2013, the BOJ announced that, based on a decision at its monetary policy meeting, it would purchase Japanese government bonds, effective 5 April 2013.

This decision was taken at the first monetary policy meeting after Haruhiko Kuroda had taken up his post as the new governor of the BOJ.

Since 2013, the monetary base increased considerably with the implementation of the quantitative and qualitative easing policy after Prime Minister Abe came into power for the second time. On the liability side of the BOJ’s balance sheet, the monetary base increased from ¥155 trillion in April 2013 to ¥387 trillion in May 2016. In April 2013, the BOJ balance sheet indicated assets of ¥175 trillion, which expanded to ¥426 trillion by May 2016.

This amounts to almost a 2.5 times increase in the balance sheet in 3 years. The BOJ made a major purchase of Japanese government bonds (JGBs), which went up from ¥98 trillion to ¥319 trillion in the same period. In other words, these long-term government bonds comprised the major part of the assets.

As regards the BOJ’s target to keep to a 2% inflation rate, the Japanese economy experienced an inflation rate that was more than 2% only during certain periods, and mainly during 2014. One of the main reasons for this was an increase in the consumption tax and higher oil prices during that period. However, after the decline of oil prices, the consumer price index (CPI) and the inflation rate fell (Figure 1) to below 1% levels. 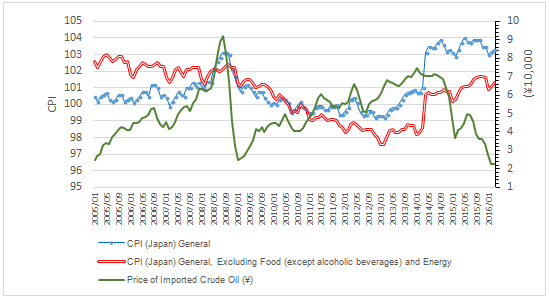 Contrary to the BOJ’s expectations, the negative interest rate policy also affected the long-term interest rate of government bonds and caused the JGB yield curve to fall and flatten (Figure 2). This means it is not rational to hold government bonds until maturity, as the value of 100 at maturity will be less than 100 (i.e., 99, 98, 97, 96, or less).

Hence, investors—especially overseas investors—trade the bonds rather than keep them until maturity. While the nominal interest rate dropped, the volatility of the bond market increased because bonds were trading higher. Long-term bonds of over 15 years have a positive yield, but nobody wants to keep bonds that are shorter than 15 years until maturity because of the negative interest rate. 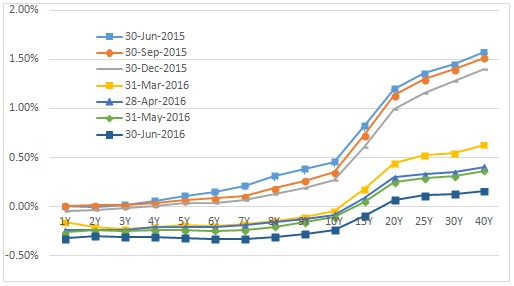 In the low-oil-price era, the BOJ had to modify the 2% inflation target by lowering it. Secondly, Japan’s monetary policy and negative interest rate policy cannot hope to pull the country out of the current recession and deflationary situation over the long term. It is more important to make investment–savings (IS), curve downward sloping rather than vertical (Yoshino and Taghizadeh-Hesary 2016c), which means that the rate of return on investment must be positive and companies must be willing to invest if interest rates are set too low.

The recession in Japan is a result of structural problems (an aging population, a shrinking labor force, low participation of females in the labor force, a conservative banking system, a low level of technology development, slow growth in small and medium-sized enterprises and start-up businesses, low productive agricultural sector) that cannot be solved through the existing monetary policy.