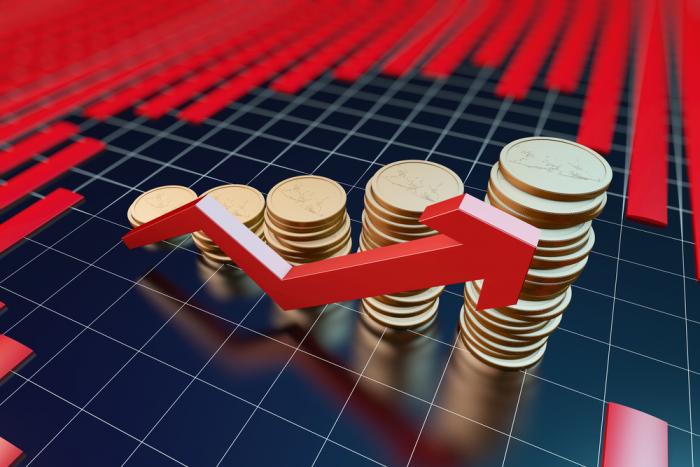 It wasn't so long ago that some of the more famous investor gurus were shrugging off gold as nothing more than shiny trinkets with no investment value. They were wrong. This safe haven is back, the recovery is clear, and there have been some very big changes of heart.

The biggest gold producers in the world have seen their share prices double this year. Not only are gold prices soaring, but producers are cutting costs and slimming down debt as they pave the way for gold to return to the top of the favored commodities list.

Even though gold dropped earlier in May, Thompson Reuters noted that shares outstanding for two major ETFs tracking gold rose 11 percent, and precious metals ETFs enjoyed four straight weeks of inflows in May. A ton of money is moving around here.

In addition, thanks to an overvalued U.S. dollar, gold may have nowhere to go but up.

Gold has no upper limit on its price, and according to Harvard economist Kenneth Rogoff, speaking to the Financial Times recently, emerging economies might do well to shift all their U.S. dollar reserves to gold. Gold, he says, could be viewed as “an extremely low-risk asset” with average real returns comparable to very short-term debt.

Russia, it seems, would agree. Moscow hates the U.S. dollar and craves gold, tripling its gold holdings between 2005 and 2015.

Billionaires have certainly taken notice. They are dumping massive amounts of money into gold right now and seeing huge returns. They are now ahead of a game that has seen prices rise almost 14 percent this year—even with the recent correction.

Take George Soros, for instance, who recently invested $475 million into Barrick Gold, which has since doubled in value.

Well-known Canadian mining philanthropist-investor Frank Giustra also appears to be excited about the recovery of gold, buying close to 13 percent of a high-potential junior miner, Sandspring Resources, which is advancing a major gold prospect in Guyana.

Marc Faber, the author of the Gloom, Boom and Doom report—known to offer dreary outlooks on stocks and investments—told CNBC last week that he believes gold, oil and gas shares have “significant upside potential in 2016” as investors hope to use them as long-term stores of value.

Part of the upside potential is because gold has gotten much smarter. Commodities downturns encourage innovation. Gold is surging in part because its miners have become much more efficient, according to Bloomberg. It's not just about more attractive exchange rates for miners outside of the U.S.

The amount companies are spending to produce an ounce of gold today has fallen by around 34 percent since 2012, the news agency says. This is what long-term billionaire investors want to see, and it's why they are comfortable putting big cash into gold right now.

In response to particularly weak U.S. job growth rate in May, the price of gold jumped by nearly 3 percent last week, and it's still maintaining this bullish attitude.

Bullion may have suffered a price dip earlier in May, but the per-ounce rate remains almost 15 percent stronger than the beginning of the year.

The first few days of June have also seen gold prices spike upward, signaling a swift recovery from mellow May and a continuation of 2016's legacy as a golden year for the namesake commodity.

While all major gold stocks have had an amazing year so far, the top three, according to ProfitConfidential, are Barrick Gold, up more than 160 percent year-to-date, Goldcorp, up more than 40 percent, and Newmont Mining, up 75 percent.

The first quarter of this year has made it brilliantly clear that junior miners are a good bet. Their fundamentals are stronger than ever—and this is, after all, where all the initial exploration work is done.

It's not just the major miners who are getting smarter and more efficient. The juniors have been producing at all-in sustaining costs coming in hundreds of dollars lower than the per ounce price. Operating margins have never looked better.

However, the best part for the savvy investor is that everyone catches on first to the major miners, while the juniors stay off the radar, which means that while gold prices surge, there is a short window of opportunity when the juniors are selling cheap. Even so, many of them have seen their stocks double since early this year.

Sandspring Resources, for one, is focused on advancing its 100 percent owned, 6.9-million-ounce Toroparu Gold Project in Guyana. It also continues to explore the over 98,000-hectare highly prospective concession.

Toroparu is the fourth-largest gold deposit in South America held by a junior instead of a major, offering great upside with a rising gold price and as a potential acquisition target.

Other juniors could also benefit from the recovery of gold while their shares remain cheap enough to lure in new investors, including GoGold Resources, with its flagship project in Mexico; Pilot Gold, in Turkey, Utah and Nevada; or Lydian International focused on Armenia and Georgia.

What happens with juniors is that they do all the heavy lifting, and then the majors swoop in with the big money once a new discovery is ready to be mined.

While the major miners are already enjoying a stunning revival and the billionaire investors are already raking in the revenues, the juniors are the next spot on this high-speed commodities train, because this is where the real reward will be—and it just got a lot less risky.

Billionaire Investors Back A Gold Price Rally In 2016 is republished with permission from Oilprice.com