In the UK, 'Generation Rent' Heads to the Polls

•
Housing Market
•
by
The Conversation 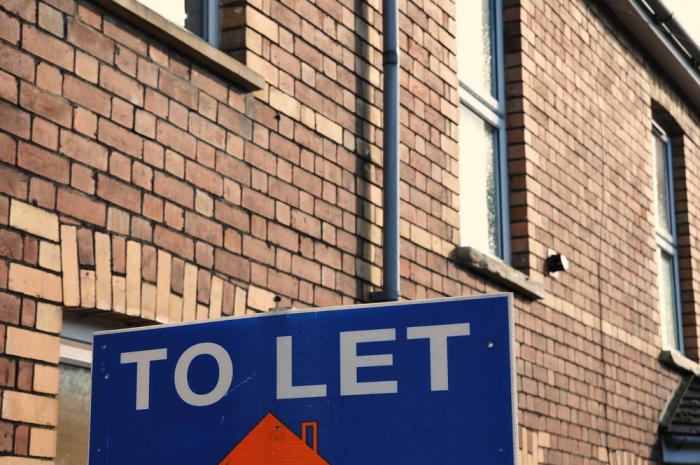 A growing number of young people are giving up on the idea of owning their own home, according to a new report by the bank Halifax. For “Generation Rent”, increasing house prices are clearly a bad thing.

For others, rising house prices can have a positive impact. For some, the conventional wisdom goes that buoyant values make homeowners feel wealthier, which causes economic confidence to grow, people to spend more money on other consumer goods and feel happier with the government in office.

A rigorous testing of this election hypothesis I leave to the experts at YouGov and Ipsos MORI. In the absence of such evidence, it remains interesting to speculate. If it is true that rising house prices bring votes to the party in power, should that putative causality bring joy or gloom to Coalition MPs?

To answer this question I went to the Office of National Statistics that provides a wealth of data on the housing sector. The first important statistic is that about 65% of householders in the UK own the dwelling in which they live. This number provides encouragement for the “housing price boom helps the government” idea. There can be no doubt that movement in home prices directly affects the nominal wealth of the majority of households.

With this in mind, I inspect what has happened to prices since the coalition took office. The good news for the prime minister and his Liberal Democrat colleagues is that from May 2010 through December 2014, the average dwelling price rose by slightly over 30% in the UK, an annual rate of increase approaching 8%.

The news is not quite so good when adjusting home prices for the cost of living, with the 2010-2014 increase dropping to 14%. This statistic means that home prices rose substantially more than the average increase in prices for non-housing goods and services.

London and the rest

However, people do not live in “the UK” in general, but in specific places within it. When inspecting the statistics by region, the news is not so coalition-friendly, as the chart below shows. To keep the analysis manageable the chart reports only two trends, for London and for the rest of the country. From the onset of the recession at the beginning of 2008 until the coalition came to power the index for both declined sharply after which it recovered slightly. 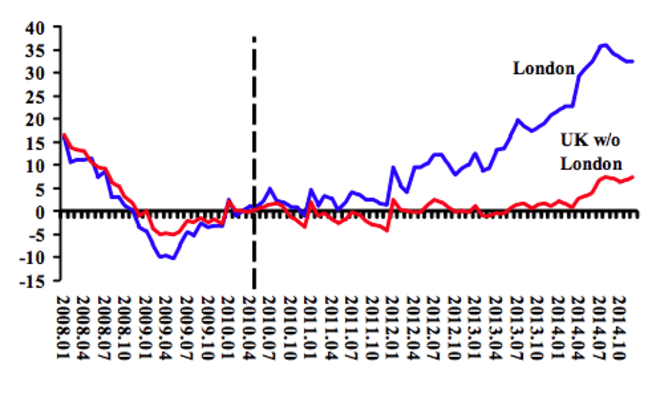 From May 2010 to the end of 2014, inflation-adjusted house prices in London rose by 33%, an increase greater than for nominal housing prices outside of London. For everyone living beyond the M25, the inflation-adjusted price increase was almost nil until the middle of 2014. By the end of the year, inflation adjusted prices were up by an extremely modest 7% compared to May 2010.

The news only gets worse for the coalition. While 65% of households in the UK as a whole own their homes (down from over 70% in 2003), in London only half are owner-occupiers (down from close to 60% in 2003). A quick check of the population statistics tells us that about 14% of the UK population lives inside the M25, and half of 14%, implies that London accounts for 7% of home-owning households. These are the house price winners – not a broad electoral base.

It is a similar story for renters where costs are significantly higher in London, but not elsewhere in the UK. 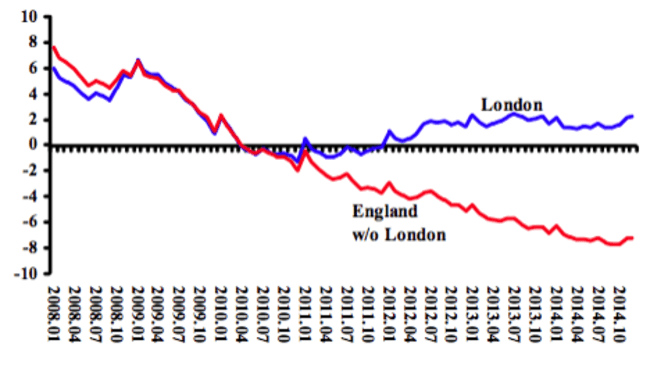 Real monthly residential rents for London and the rest of the country, January 2008 to December 2014. ONS | John Weeks, CC BY-ND

This second chart deflates average monthly rent costs by removing the same non-housing cost of living index used in the first chart. The result indicates whether the trend in rent costs leaves renting households with relatively more or relatively less of their incomes to use on other needs (food, transport, etc.).

As the graph shows, rents outside of London rents rose absolutely, but less than the composite cost of all other things households buy – meaning that renting has effectively become cheaper by about 7% compared to May 2010. In London, however, the experience of renters appears less happy, with real rents rising slightly (by 2%).

All these statistics convey a simple message – the vast majority of people delighting in rising house prices lives in London and account for a very small share of the electorate. Outside of London, the real appreciation of house prices has been less than the fall in real rents.

On this basis, homeowners in London should be happy with the coalition (and perhaps more inclined to vote for them), but renters will be less happy and less likely to vote Conservative or Liberal Democrat.

In the rest of the UK, however, homeowners will not be happy, but renters will be. Since the latter tend to vote Labour in England and Wales, electoral news from beyond the green belt may not be good for the coalition. If the Conservatives are relying to any extent on a feel-good house price effect to usher them back into office in early May, they should cover their bets by lining up alternative employment possibilities.

See also: The Economy of the UK, GB, British Isles (or Whatever You Want to Call It!)