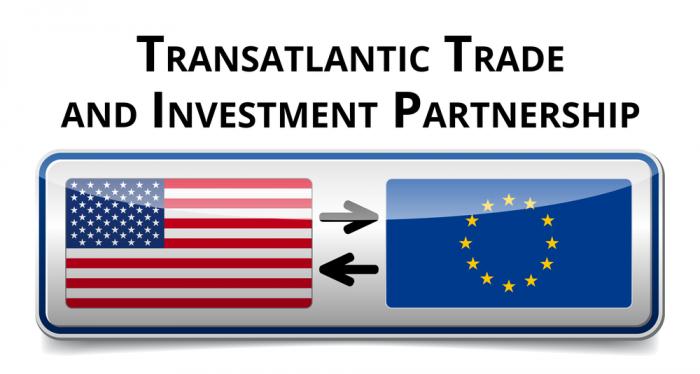 Transnational corporations are secretly and undemocratically, formulating the rules of the TTIP (Transatlantic Trade and Investment Partnership). The world’s largest ever, free trade deal will be the most powerful tool in corporate resistance to the COP21 agreement.

There was great optimism following the pledges made by nearly 200 nations at the COP21 conference on in Paris in December. In setting a goal of net zero emissions by the middle of the century, the Paris agreement went much further than the 1997 Kyoto protocol, which spectacularly failed.

However, making promises is always the easy bit. The hardest part is following through. One reason Kyoto failed is that most of the corporate world did not want it to succeed. Despite ‘greenwash’ protestations to the contrary and some honourable exceptions, the vast majority of big businesses will resist any environmental regulations that endanger their profit margins. “The aims of COP21 are at odds with the neoliberal consensus around maximising growth which is shared by all governments and big business,” said Gabriel Siles-Brügge, a lecturer in politics at Manchester University.

Concurrent with the Paris talks in December gigantic transnational corporations were busy arming themselves to resist legislation. Their most powerful tool will be the TTIP (Transatlantic Trade and Investment Partnership), a free trade agreement being negotiated in secret between the EU and the US and expected to be introduced later this year. It will be the largest such trade deal ever, rewriting the rules for roughly half the world’s GDP. There are already 3,000 Bilateral Investment Treaties (TICs) in operation globally. All of them sound like perfectly reasonable ways to encourage more trade until you realise that the rules have been written to satisfy the demands of the richest corporations, according to Paris-based US author Susan George, who studied the TTIP in her recent book Shadow Sovereigns: How Global Corporations Are Seizing Power.

George says the dual goals of TTIP are to obtain total freedom for investors by eliminating regulations and giving corporations the ‘right’ to sue governments in secret courts under ‘Investor-state dispute settlement’ (ISDS) provisions if they have introduced measures that ‘threaten’ to reduce profits. “The TTIP will enable big business to create a freezing effect on the executive branch of government. They will be able to threaten so many law suits and really influence the direction of politics,” said Susan George.

One example of this ‘freezing’ effect was the stymieing of the European Commission’s proposal for a 6% CO2 decrease in fuel consumption in the transport sector. The idea was supported by major stakeholders in the transport sector, but it did not pass because it might have restricted trade in US tar sands. Under TTIP, the law would have exposed European nations to ISDS lawsuits.

The EU tried to head off criticism a year ago by promising to reinforce the environmental protections enshrined in the TTIP, but leaked drafts seen by The Guardian newspaper revealed how the corporate lobby’s influence guaranteed the dilution of the legislation. The drafts contained vague and non-binding commitments to environmental safeguards. There were no obligations to ratify international environmental conventions, nor were there regulations to enforce goals on biodiversity, chemicals and the illegal wildlife trade.

The Paris-based environmental attorney Tim Grabiel said: “The safeguards provided to sustainable development are virtually non-existent compared to those provided to investors...The sustainable development chapter comprises a series of aspirational statements and loosely worded commitments with an unclear dispute settlement mechanism. It has little if any legal force.”

A petition signed by a million people expressed concerns to the EU that the corporations will use the ISDS courts to throw out environmental legislation. In addition, there is plenty of evidence to suggest they are right. Environmental cases have accounted for 60% of the 127 ISDS cases already brought against EU countries under existing bilateral trade agreements in the last two decades, according to Friends of the Earth Europe. Europe’s taxpayers have paid out at least US$3.5 billion to private investors as a result. Under the TTIP, this number is likely to increase rapidly. In other countries, too, there have been lawsuits under similar treaties. For example, under the North American Free Trade Agreement, an ISDS tribunal ruled that the Mexican Government needed to pay out US$15.6 million to a US company because it had not granted permission to build a hazardous waste landfill in the 1990s.

Although negotiations for TTIP are held in secret and the EC’s occasional summaries are ambiguous and sketchy, powerful lobby groups in both the US and the EU are working behind the scenes to shape the terms. Dr Gabriel Siles-Brügge, the co-author of TTIP: The Truth About the Transatlantic Investment Partnership, said: “The TTIP drafts we’ve seen so far closely resemble the proposals put forward by big business. States and corporations share a broad ideological commitment to the desirability of liberalising trade and minimising the impact of regulations.

The ‘revolving door’ between corporate lobbies and government regulators has enabled big business to infiltrate the political world. The boundaries between the two have collapsed. More than a third of the members of the previous EC have taken corporate jobs and they will be able to lobby on behalf of their employers this year, according to a report by the NGO Corporate Europe Observatory. The writers revealed that former commissioners have accepted 115 appointments to business and non-profit roles.

“The revolving door is especially apparent in the European Commission, from where high officials in different directorates move into the Brussels HQ of a large company as soon as they leave, or they might join a powerful lobby group acting on behalf of the food industry, or big pharma,” said Susan George. “They are useful individuals because they know how things work and are part of the web of interlocking personal connections and influence.”

The shadowy power of the corporate lobby was even felt at the COP21 talks. Several of the COP21 corporate sponsors had direct ties to the fossil fuel industry, demonstrating a conflict of interest, according to a report from Corporate Accountability International. The major sponsors include Engie, the continent’s largest importer of natural gas, France’s EDF, which operates many large coal-fired power plants, and BNP Paribas, a multinational bank with billions of dollars invested in coalmines and coal-fired power plants. All three have massive greenhouse gas footprints. “It’s greenwashing,” CAI spokesperson Jesse Bragg has said. “Those corporations are able to say they’re part of the solution just because they write a check.”

To fight climate change it is essential to combat the networks of corporate power that will try to stop anything that costs them money in the short term. Nick Dearden, Director of Global Justice Now said, “Big business today has a frightening amount of power, absolutely incompatible with real democracy. These so-called ‘trade’ deals are actually about rewriting the rules of the global economy further in favour of big business.

“There is still apathy among electorates, but this arises from the disbelief that there are democratic alternatives. We must spell out how another world is possible - one where we have control over the world’s resources and use them more fairly and sustainably.”

See also: The Importance of 'Fast-Track' Authority to the TPP and TTIP