How Long Do You Plan on Working? 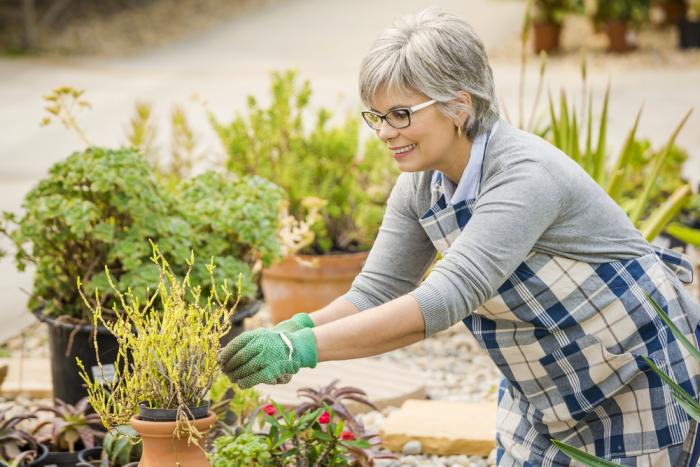 The longer life expectancy of people in industrialised countries means governments are raising the ages at which citizens can apply for state pensions.

In the UK, state pension age for both men and women is set to rise to 66 by October 2020, and 68 by 2046. Now the government has launched a review to look at whether it should rise even higher in the future.

Currently, over half of the population stops working before they reach state pension age. Yet, those people who stop work before the retirement age don’t do so at the same rate across the country. The percentage of the British working age population claiming the Employment and Support allowance (formerly called incapacity benefit) tends to be highest in the north and lowest in the south and east of England.

As governments plan for the future, and try to develop interventions to stop older people leaving their jobs before the retirement age, they need to know what factors are really causing these inequalities in what is called “worker retention”.

Previous studies in the USA, UK, Norway and Iceland have shown that in areas where there are more unemployed people, there also tend to be more people who receive disability pensions, suggesting that the two are linked.

However, our new research has shown over the course of the last recession, this was not the case. People who left the workforce between 2001 and 2011 either did so because of their health or because of the job market in the area where they lived – the two were not linked.

What happens in a decade?

Colleagues from the Research on Extended Working Lives (RenEWL) consortium and I set out to address this issue using data from the Office for National Statistics Longitudinal Study – a 1% representative sample of all people who answered the census in England and Wales.

We only included people in the study who were in work and aged 40-69 years at the 2001 census. We then assessed whether their work status had changed at the next census, in 2011. If the participants were not in work, they could identify themselves as being long-term sick or disabled, retired, a student, looking after their home or family, or “other”.

We found that older workers living in areas with higher unemployment in 2001 were less likely to be in work ten years later than people who lived in areas with lower unemployment. This was true both if the person had given the reason for being out of work in 2011 as sickness or disability, or if they had simply retired.

Overall, many more people in our study left the work force due to retirement rather than sickness or disability reasons (29% versus 3%). As the graph below shows, older people living in areas of high unemployment were around 1.7 times more likely to be out of work due to a long-term sickness or disability in 2011, and 1.2 times more likely to be retired, than those living in areas of low unemployment.  However, this did not necessarily mean that they left the workforce because of their disability. 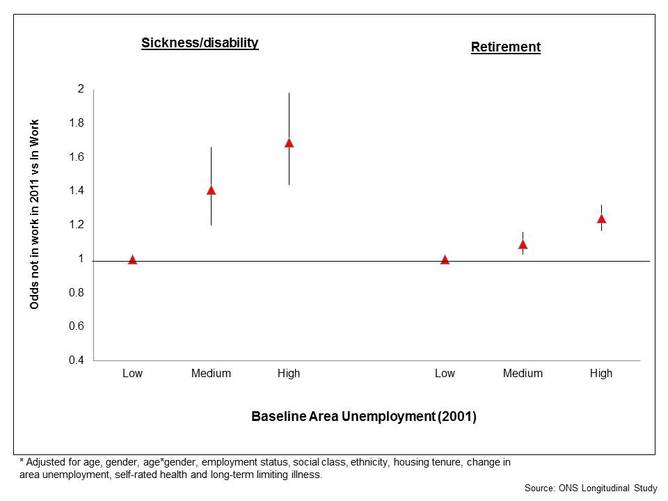 Odds ratio of reporting being sick/disabled and retired in 2011, vs. in work, by local authority area unemployment conditions and individual health status in 2001.

We also looked at whether people with poor health, who are more likely to exit the work force over the decade, also tend to live in areas of high unemployment. Our study suggests not. We found that how healthy a person was could not explain why people in some areas left work earlier than those in other areas. Nor could this be explained by their gender, age, employment status (full-time or part-time), social class, ethnic group or whether they owned their own home.

In fact, among those respondents that identified as sick or disabled in 2011, those who rated their own health better were more likely to be out of work because of unemployment in their area. As the graph below shows, for people who had good and fairly good health, living in an area with higher unemployment meant that, they were more likely to be out of work a decade later (the triangles move up). For people in poor health, they are out of work no matter where they live. 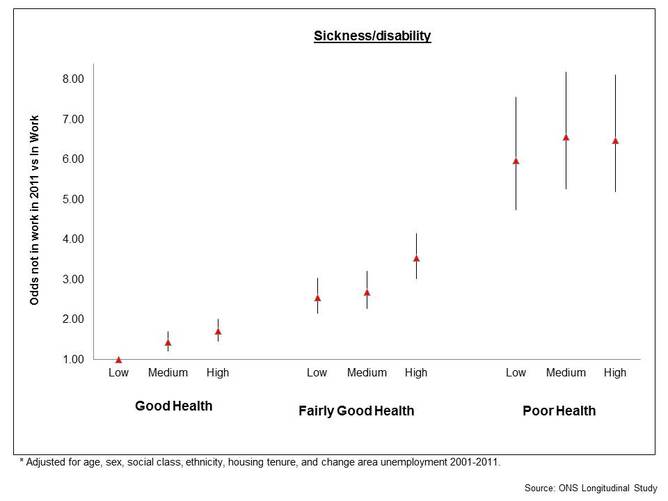 Odds ratios of reporting being sick/disabled in 2011, vs. in work, stratified by local authority area unemployment conditions and individual health status in 2001.

This is not to say that health was not a driver for people stopping work. Health was very strongly related to work force exit for all inactive groups, and people in poor health in 2011 were almost six times more likely not to be in work ten years later. However, the overall picture seen in our study is that where people live and their health are not linked – they are independent predictors of whether older people stay in work.

Our study does not yet clarify exactly what is driving people in areas with higher unemployment to leave the work force. However, in the current economic climate of austerity, these findings hold an important message: that policies and programmes designed to retain people in the workforce in the middle of their lives may be most effective if targeted to those areas of the country that already have higher unemployment.