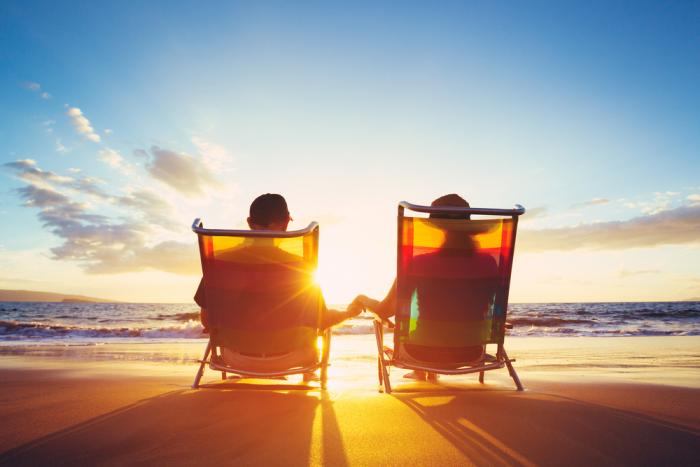 The decline in the labor force participation rate helps explain the substantial decline in the US unemployment rate over the past couple of years.  That decline has helped bring the Federal Reserve to the point that a December rate hike is extremely likely barring a significant disappointment at the end of the week with the November jobs report.

This Great Graphic was on Ritholtz's Big Picture Blog, compiled by Deutsche Bank's Torsten Slok from BLS data.  The basis is last year's data.  It shows the various reasons why people of different ages are not in the labor market.  Two reasons stand out. 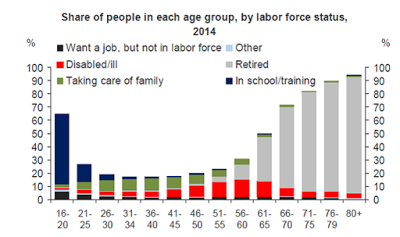 For the youngest age cohort, the blue bar illustrates the role of education.  It keeps young people out of the labor market.  Although spending on education is consumption, most people seem to regard it as an investment.  If secondary education expenditures were investments, US investment and especially savings are much closer to other high-income countries (as a percentage of GDP).

For the older cohorts, the gray bar shows retirement.  It becomes evident at the 51-55 age group and grows as one might expect.  The early onset reflects early retirement pressures.   Separate studies have suggested that many of the men who are opting for early retirement have wives that work (and maybe covered for health care benefits from her employer).

The color of the bar (red) for those who have left the work force due to disability makes it stand out.  Of course, older people have more health issues that younger workers and as the workforce ages, there may be something natural about this.  However, there have been some rules changes, making it easier to qualify for disability insurance and the payout has increased.

Congress widened the definition of disability, though not recently.  The legislative history goes back to at least 1980.  Carter had signed the Disability Amendments Act of 1980, which encouraged tighter oversight of Social Security disability benefits.

Early in his tenure, Reagan pressed Social Security for stronger enforcement.  This led to the denial of benefits to over one million people.   Faced with a popular backlash, Congress passed the Social Security Disability Benefits Reform Act in 1984 and signed by Reagan. The new law put great emphasis on self-assessments.

Lastly, we note the green bar, which captures those who leave the work force to take care of family members.  Part of the solution may be better and more affordable day care.  Care for aging parents is a different issue and may be more intractable.

One implication of this review is that a significant pick up in the participation rate looks unlikely in the near-term.  There may be a cyclical element still.  For example, if the labor market improved significantly maybe fewer young people would extend their education, or maybe few middle-aged folks would seek early retirement, or claim disability.  However, there seems to be limited scope in the coming period for substantial improvement.

Great Graphic: Decline of US Participation Rate Explained is republished with permission from Marc to Market

See also: It's All about Jobs, at Least for Today