China's Control of the Mekong is Upsetting its Neighbors 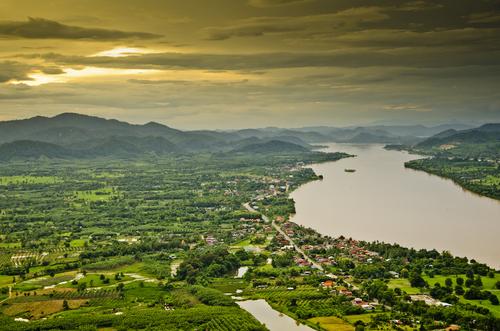 Trouble may be brewing on the Mekong. The cumulative socio-political and environmental impact of dams on the Mekong raises serious cause for concern. There is a race to the bottom to secure economic growth from a burgeoning hydropower boom in Laos, Cambodia and Vietnam. Meanwhile, China’s increasingly dominant control of water to the north is causing problems with its neighbours.

The dams will put at risk the food security and livelihoods of tens of millions of people — especially in Cambodia’s lowlands and Tonle Sap Great Lake, the world’s most productive inland fishery, and in the Mekong Delta, Vietnam’s rice bowl and home to nearly 19 million people. While Laos has technically complied with the principle of prior notification, consultation, and cooperation as described by the 1995 Mekong River Commission (MRC) Treaty, it has used misleading information to advance its hydro projects.

In 2012, for example, Vientiane claimed that engineers involved in Laos’ dam building would design fish passages that would allow fish to travel freely across the Mekong River branches in Laos. However, the MRC has not had the opportunity to review and test Laos’ fish passage design. Scientists contend that this design is inadequate because of its one-size-fits-all approach to diverse fish species and its focus on upstream rather than downstream fish migration. And the MRC has no legal authority to prevent violations of the Mekong Treaty.

But what is more concerning is the shifting geo-strategic landscape surrounding the dam conflict.

China’s increasingly dominant role in controlling upper Mekong waters has worsened relationships with its neighbours. Vientiane and Phnom Penh are building dams based on the assumption that China will allow more water to flow during the dry season. But China can theoretically release or stop releasing water when it pleases. A lack of transparency about water management has led China’s neighbours in Southeast Asia to believe that water control may not only serve China’s water needs but also be utilised as a form of coercion over them.

China and the lower Mekong countries tend to make policy based on an outdated interpretation of international water law that emphasises a ‘first come, first served’ approach, rather than cooperation among all countries along the river. Without a comprehensive cooperative framework to manage water disputes, these disputes could spill over into diplomatic and political arenas.

There is no clear evidence that Beijing has been dictating to Vientiane on decisions over the recent Xayaburi and Don Sahong dam projects. Indeed, the problem lies with Laos itself. It has undermined the cooperative framework of the MRC, while downstream governments have largely failed to stand up to it. There is not a strong history among the Mekong countries of using formal mechanisms, including international law, to resolve problems that transcend national boundaries.

And Vietnam is itself divided. While some in the Vietnamese government are vocally opposing dam building on the Mekong, other Vietnamese who have close economic and political ties with Laos’ leaders are not. Vientiane has taken advantage of this lack of consensus in Vietnam to advance its interests at the expense of its neighbours.

Downstream in Vietnam, there is also concern about the broader strategic uncertainties linked to the race to the bottom among the Mekong countries. China’s influence expands from the north on Vietnam’s Mekong Delta to the South China Sea. Vietnam believes these waters to be its exclusive economic zone and in the past, there has been escalation of conflict between Vietnam and China. The two nations are stuck in a vicious cycle of historic, deep-seated distrust. Beijing is attempting to make Cambodia and Laos buffer states between China and Vietnam. If it does so successfully, China will become the paramount regional hegemon that can change the rules of engagement and ‘discipline’ Vietnam and other Southeast Asian states.

It is unclear how Beijing’s aggressive rise in South China Sea may spill over to water politics in the Mekong and vice versa. In Vietnam, there is popular resistance to Chinese interference in domestic politics: Vietnamese nationalists attack attempts to ‘sell’ the country to foreign forces. But organised opposition to China does not obviously exist in Laos or Cambodia, leaving Beijing free to try to influence policymaking in these countries.

Relations are deteriorating among the lower Mekong countries and within ASEAN over the dam conflict, while Beijing continues to exploit this division for its own geopolitical interests. Ultimately, to ameliorate the race to the bottom among the Mekong countries, technical solutions must connect to efforts to improve the broader strategic landscape, the MRC procedures, and stakeholders’ attitudes and behaviours toward regional cooperation.