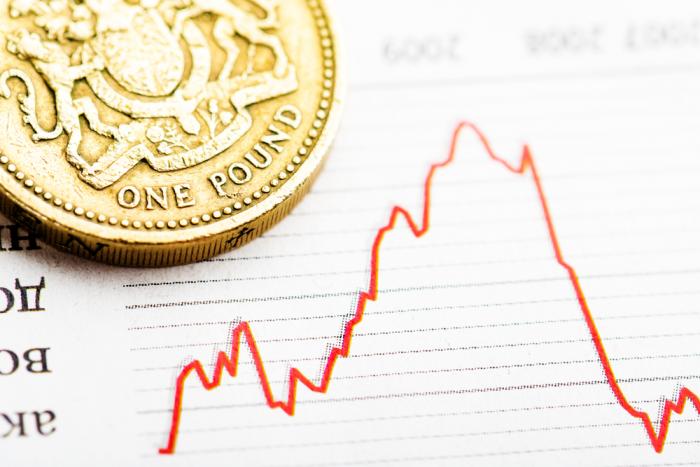 In an otherwise uneventful foreign exchange market, sterling's slide for its fifth consecutive session is the highlight.  It was pushed below $1.30 for the first time since July 12.  Initial resistance for the North American session is seen near $1.3020, while the $1.2960 area corresponds to a minor retracement objective.

Sterling has been sold-off since the middle of last week.  Today's data may have simply provided a little more ammo for what the market was already doing.

There were three reports today, BRC sales, industrial production, and the trade balance.  The BRC sales figures are for July, while the other two reports cover June.

The BRC sales for stores open a year was an unexpected pleasant surprise at 1.1%, the most since January.  Expectations were biased for a second consecutive decline.  This report seemed to contradict the CBI survey.  Price cuts and favorable weather were cited as drivers for the BRC gains.

The other reports disappointed.  Industrial output rose 0.1% in June, but the May series was revised to a 0.6% decline rather than a 0.5% fall.  In addition, manufacturing itself failed to recover, falling 0.3% after a revised 0.6% drop (from -0.5% initially).

Separately, the UK reported its largest merchandise trade deficit (GBP12.4 bln) since March 2015, and the May series was revised to show a GBP11.5 bln deficit instead of GBP9.88 bln.  The trade deficit with non-EU countries widened to GBP4.16 bln from a revised GBP3.56 bln, which is about a billion pounds larger deficit than initially reported.

The UK's overall trade deficit was twice as large as the Bloomberg median forecast (GBP5.08 bln vs. GBP2.55 bln), and the May deficit revision nearly doubled the initial estimate (GBP4.23 bln from GBP2.26 bln).  The trade report, more than the industrial output figures, may spur a downward revision in Q2 GDP.  It also warns of the large external funding needed.

It does seem that at least initially, since the referendum, there have been a few dozen foreign acquisitions mooted.  However, at least some of those deals seemed to have been made more attractive by sterling's slide.  A further depreciation of sterling may be needed to continue to attract direct and portfolio capital.

Another economic feature of the session was the Chinese inflation reports.  Consumer prices rose 1.8% in the year through July.  This was in line with expectations and down from 1.9% in June.  Last July it stood at 1.6%.  Food prices rose 3.3%, while non-food prices rose 1.4%.  Urban inflation was slightly faster than rural consumer inflation (1.8% vs. 1.5%).  Producer prices moderated more than anticipated.  The 2.6% year-over-year decline in June stood at -1.7% in July.  It is the least negative report since August 2014.  Some Chinese economists are now expecting PPI to turn positive before the end of the year.

Chinese stocks appeared to like the news and extended yesterday's gains.  The Shanghai Composite is in five of the last six sessions.  However, the easing of producer price deflation did not stop the bond market rally in China.  The 10-year yield is at its lowest level (2.75%) since early 2009.  Meanwhile the dollar trading in narrow ranges against the yuan for the second consecutive session, just below the 20-day average (CNY6.6670).

In addition to the UK and Chinese data, Germany reported that its trade surplus edged higher in June (24.9 bln euros from 21.0 bln), but exports were disappointing.  They rose 0.3% after falling 1.8% in May.  The market expected a stronger rebound.  Import rose 1.0% and was stronger than expected on a seasonally-adjusted basis.  The euro all but ignored the data.  It has been confined to about a third of a cent range, largely within the price action since yesterday.  It has been unable to poke through $1.11 and is finding bids a bit below the 20-day moving average ($1.1080).

Recall the banking index fell the first two days after the July 29 stress tests results, but has rallied since, and now is at the best level since July 22.  It is the fourth session that Italian banks have rallied, but an index of them remains below the July 29 level, which was flattered by a nearly 4% rally the day of the stress test results.

Lastly, we note that Spain's 10-year yields have maintained yesterday's break of the psychologically important 1.0% threshold.

The US calendar features include Q2 productivity and unit labor costs.  These are derived from the GDP figures and the weaker than expected growth warns of downside risks to productivity and upside risks to unit labor costs.  Given the significance of the inventory swing on recent quarterly GDP figures, the wholesale inventory report (June) may draw economists' attention.  Canada reports housing starts, which is not typically a market-mover.

See also: The BOE Makes a Widely Anticipated Cut, and can Cut Again