A Future with a Low-Carbon Asia 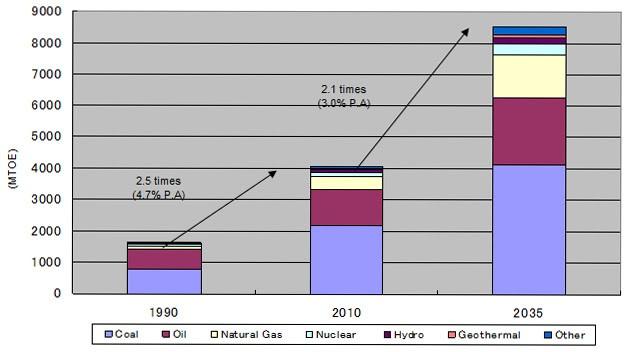 The pattern of energy supply and demand that has prevailed over the last 3 decades is undergoing transformation, with great consequences for Asia’s energy security and regional cooperation. The two factors driving this transformation are the rise of the Association of Southeast Asian Nations (ASEAN), the People’s Republic of China (PRC), and India as major energy consumers, and the impressive additions to oil, gas, and coal output. The first is driven by growing populations, industrial growth, and economic ascendance of emerging economies. The second stems from the opening up of new geological formations for the production of conventional fuels at reasonable costs.

An energy outlook study by the Economic Research Institute for ASEAN and East Asia (ERIA) (ERIA 2014a) shows that Asia’s final energy consumption in the business-as-usual (BAU) case, where the current level of economic growth continues and energy policies are intact, is expected to increase 2.4 percentage points per year (see Graph Figure 1). Carbon emissions in this case are projected to increase 3.7 percentage points per year until 2035. Among the emission reduction strategies, power generation is a central challenge to reducing overall emissions (Anbumozhi and Kawai 2009). This is the case not only because stationary energy accounts for 40% of global energy-related CO2 emissions, but also because reducing emissions from sources such as the transport sector will involve further electrification—since many of the most promising low-carbon technologies are those that produce electricity. However, 640 million people lack electricity in Asia. So how do we provide energy to keep the lights on, decarbonize the energy system, and attain energy security?

With energy demand expected to grow by as much as 250% in cumulative terms, the region faces huge system-wide investment demands, from boosting energy efficiency, to the development of regional interconnected grids and improved use of low-quality coal. Business-as-usual policies are not sufficient to bridge the gap. We need to find the best strategies to cement energy security with a low-carbon energy supply. Outlined here are three components of such an architecture.

Analysis of the energy investment outlook in Asian economies shows that over the long term, energy savings from power generation and supply side and demand side energy efficiency measures exceed the output of any single fuel source. Meanwhile, energy productivity is also improving rapidly. The amount of energy used to produce a unit of gross domestic product (GDP) declined by 1.5 percentage points in 2011, compared with an average annual decline of 0.4 percentage points between 2000 and 2010 (ERIA 2014). The alternate policy scenario (APS), wherein the best available low-carbon technologies are deployed economy wide, envisages additional investment of $12.7 trillion in electricity for industry and for the residential and commercial sectors (IEA 2014). The increased investment could generate cumulative savings of 14% in the total primary energy supply and 11% in avoided carbon emissions, compared to total final energy consumption. The benefits of energy efficiency are multifaceted, as investments in energy efficiency can also contribute to economic growth via new job creation and improved health.

From a conceptual point of view, the opportunities with energy efficiency as a hidden fuel are known, the good will is there, and the technical solutions exist and are known, but the main hurdle is implementation on the ground. In this respect, planning, standards and target setting, institutional and human capacity building, and innovative business models, among others, are the basis for implementing a general framework for harnessing energy efficiency potential. This framework should be supported by government policies on rationalizing energy pricing mechanisms.

Coal accounts for more than half of electricity generation in the PRC, India, and ASEAN, and will continue to be an important player in global energy markets in the coming decade. At the end of 2012, Australia, the PRC, India, and Indonesia combined, accounted for 64% of the world’s total coal production of 7,831 million tons, with Indonesia being the largest exporter (IEA 2013). Coal reserves in the region would be sufficient to sustain current rates of production for the next 50–70 years and lift hundreds of millions of people out of energy poverty in the short term. But the region’s reserves are predominantly subbituminous lignite and of low and medium energy content. Hence, clean, affordable electricity from coal is vital for the region’s emerging economies.

Today’s high-efficiency supercritical coal plants have the capacity to lower carbon emissions by 25% compared to the oldest plants. According to recent studies (ERIA 2014b; IEA 2012), if clean coal technologies are used, the same amount of electricity can be generated with only 33% of current coal consumption. Furthermore, clean coal technologies will create an estimated 550,000 jobs in the sector (ERIA 2014b). However, the critical element is the high capital cost of the technology, a problem shared with other low-carbon technologies such as hydropower and offshore wind power. A policy or regulatory framework that requires internalization of externalities such as emissions would help promote the use of cleaner coal, and have a positive impact on plant efficiency, emissions, and energy security. Japan’s Bilateral Offset Credit Mechanism, which allows for the offsetting of the high costs of technology to guaranteed transfer of carbon credits, is attracting interest from several countries.

The region faces a sharp increase in reliance on oil imports, which will impose high costs and lead to more vulnerability to potential disruptions. On the other hand, the unevenly distributed 229 gigawatts of hydropower, 1.2 million cubic meters of natural gas, and 800 million cubic meters of oil in the Greater Mekong Sub-region provide opportunities for the region’s emerging economies to tackle energy gaps and security challenges through cross-border power interconnection. Economic analysis of selected ASEAN power-grid interconnection projects indicates that they greatly improve the investment on power system efficiency, and are estimated to bring in an additional 33,125 megawatts of hydro energy and cut carbon emissions by almost 70 million tons a year by the 2030s (ADB and ADBI 2013).

While an integrated energy market could drive investment decisions in an efficient way, the current domestic policy environment that favors such mechanisms is far from ideal. System operators and regulators continue to rely on discretionary decisions that strongly incentivize investments locally and influence capacity prices and power plant revenues, thereupon threatening the bright opportunities available at the regional level. New developments in terms of soft infrastructure, such as laws, standards, deregulations, and new models of public financing, are crucial for allowing energy trade and investment to happen regionally and on a competitive basis.

Addressing the operating challenges and investment issues discussed above will require the adaptation of regulatory and market frameworks. Even though countries face different energy supply and demand features, jeopardizing energy security will never be an option. However, security of the electricity supply in a country with large hydro reservoirs is not the same as for a country with a lot of variable wind power or, to take another example, aging coal plants. Each country will need to find the solution best suited to its situation. Attaining energy security and de-carbonization of the energy system will require a change of perspectives, strategies, and policies.

As we enter into the “Asian century,” we must rethink how to incorporate new and developing elements of low-carbon energy into the economic structure—from renewables generation, to transport based on biofuels, to energy-saving potential, to the safety of nuclear power plants. To achieve cost-effective improvements in energy security and attain the goals of low-carbon green growth, we must consider all available options and then transform the system as a whole. This requires working together for mutual benefit. Current climate commitments, national targets on energy efficiency, and flexible institutions for regional cooperation offer the hope that we can arrive at a sustainable post-carbon era by mid-century. We have the science, technology, and the game plan to make it happen. Now it is a question of whether we will recognize the economic possibilities and benefits that lie ahead and muster the will to get there in time.

Securing energy for low-carbon Asia: What needs fixing? is republished with permission from Asia Pathways