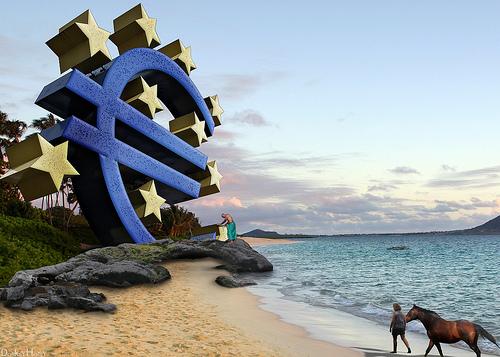 When the truth is unimaginable, human psychology finds an alternative reality in which to dwell. That describes the global situation today, when the entire planet seems to be in denial about what is about to occur in the eurozone.

NEW YORK – Losing a long war is always hard to accept. Hemmed in by the Americans and the Russians in the final days of World War II, Hitler convinced himself that he had two armies in reserve to mount a counter-attack and win the war. Meanwhile, having lost the entire Pacific, Japan’s Imperial Cabinet believed that no enemy could set foot upon the country’s sacred soil. When the truth is unimaginable, human psychology finds an alternative reality in which to dwell.

That describes the global situation today. The entire planet seems to be in denial about what is about to occur in the eurozone. Pundits keep expecting Germany to pull a rabbit out of the hat and flood the continent with Eurobonds, or that Mario Draghi will mount a coup at the European Central Bank and buy up every deadbeat country’s bonds.

Either could happen, but both are extremely unlikely. Germany cannot guarantee the eurozone’s debt without control over the eurozone, which no one has offered, and Northern Europe will not permit the ECB to be hijacked by “Club Med” and turned into a charity organization. It is not just a matter of politics; it is also – as the Germans keep pointing out – a matter of law.

Europe has a Plan A, whereby each country would reform its economy, recapitalize its banks, and balance its budget. But Plan A is not working: its intended participants, most notably France, are rejecting it, and there is an emerging southern European consensus that austerity is not the solution.

Greece’s recent election has put it in the anti-austerity vanguard. Italy and Spain (which does not have enough money to bail out its banking system), have similarly called for an end to austerity, and Ireland will be voting on it soon. All have lost access to the bond market, and Portugal is so far beyond hope that its sovereign debt is trading for cents on the euro.

There is no well-thought-out plan for the orderly exit of the eurozone’s insolvent countries. There are no safeguards, no plans, no roadmap – nothing. The Maastricht Treaty, like the United States Constitution, did not provide for an exit mechanism. So, instead of realism and emergency planning, we get denial and more happy talk. But, just because something is “unthinkable” doesn’t mean that it can’t happen.

In fact, it already is happening. Greece is rapidly running out of money; its residents are withdrawing their deposits and have stopped paying their taxes and utility bills. Even if the country can stay afloat until the June 17 election, a disorderly eurozone exit, default, and currency redenomination will follow. Greece will be dependent upon foreign aid for essential imports such as petroleum and food. Civil order will be difficult to maintain, and the army may be forced to step in (again).

Once Greece goes, runs on bank deposits are likely to follow in Spain and Italy. There is nothing to stop Spanish and Italian depositors from wiring their euros from their local bank to one in Switzerland, Norway, or New York. At that point, the only thing still standing between the eurozone and financial chaos will be the ECB, which could buy government bonds and fund the bank runs. The scale of such an operation would be enormous, and would expose the ECB to huge credit risk. But it could, in principle, step in – if Northern Europe permitted.

If the ECB does not step in, Italy and Spain, too, will be forced to exit the eurozone, default on their euro-denominated sovereign and bank obligations, and redenominate into national currency. Massive losses would be imposed on the global financial system. Given the opacity of banks’ exposures, creditors would be unable to discriminate between the solvent and the insolvent (as was the case in September 2008).

The US banks most likely to be affected by such a scenario would be the globalists: Citigroup, Bank of America, JPMorgan Chase, Goldman Sachs, and Morgan Stanley. They would require a rescue package similar to the US Troubled Asset Relief Program, created after Lehman Brothers’ collapse in 2008. The US can afford a second TARP, but it would require Congressional legislation, which is not guaranteed (though the US Federal Reserve can, of course, keep the system funded no matter what).

Massive wealth destruction, combined with global financial chaos, would pose a challenge to monetary policymakers worldwide. Central banks would be tasked with preventing deflation, implying a major round of quantitative easing. But, since banks are the transmission mechanism for monetary stimulus, this presupposes functioning banking systems. Each country would need to restore confidence in its banks’ solvency, which would most likely require a blanket bank guarantee and a recapitalization scheme (such as TARP).

The US financial system can withstand any shock, because the US can print the money that it needs. The Fed can maintain nominal prices, nominal wages, and growth if it acts heroically, as it did in 2008. The stock market will react negatively to the level of uncertainty caused by the collapse of the European financial system (as it did in 1931), and the dollar, yen, and gold should benefit. The fate of the British pound and Swiss franc is impossible to say; they could benefit as safe havens, but their banks are highly exposed to the eurozone.

It is bad enough that the world is utterly unprepared for the future that can be foreseen. The unanticipated financial, economic, and political consequences of the coming crisis could be even worse.

Christopher T. Mahoney is a former Vice-Chairman of Moody’s.