Why Is US Business So Anti-Obama ??? 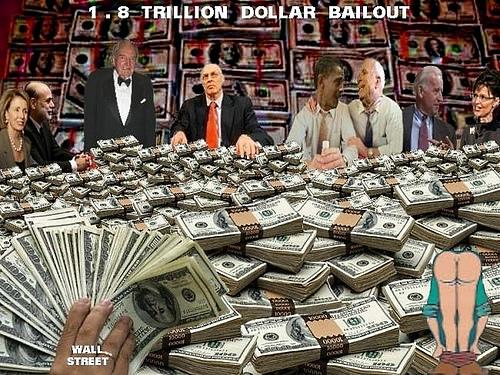 Honestly, it’s a complete mystery to me.

As we have demonstrated time after time, Obama has done everything to give BIG business, especially, whatever it wanted, depending on corporate middlemen to “get the job done,” no matter what.

In his two “signature” pieces of legislation so far – health “care” and financial “reform” – the President made sure all the major players were take care of – and more.

Then, when the BP oil rig in the Gulf of Mexico literally blew to kingdom come,

“no drama” Obama was content to let BP “handle” the situation

until its absolute failure finally led to public pressure for his self-evidently reluctant intervention.

So where do all these heavy politicos in the business community get this idea he’s so opposed to them,

when he’s made every effort to make sure they get pretty much whatever they want ???

and what they see as a new era of big, stifling government and heavy regulation.

Now, no one can deny the Obama approach IS heavily “regulator-oriented.”

as we will detail next week – and so brilliantly saw during the infamous AIG “bailout”.

So what’s with Ivan Seidenberg, the chief executive of Verizon, in this particularly stinging rebuke ???

In remarks to the Economic Club of Washington, he blamed President Obama for

“an increasingly hostile environment for investment and job creation”

“making it harder to raise capital and create new businesses.”

That’s right, dude – by giving you and your pals EVERYTHING you want.

And after the United States Chamber of Commerce –

then complained the administration “vilified industries,”

cravenly responded with a letter clearly meant for the business community as a whole.

They wrote: “The stakes are far too high for us to be working against one another.

rhetoric that fails to acknowledge the important steps this administration has taken every single day to meet our shared objectives.”

This poisonous dynamic between Washington and business is impossible to understand.

According to some people with feet in each community, both sides could make adjustments,

although it’s hard to imagine what more Obama could possibly do.

But the business community especially needs to make efforts to mend this relationship, they argue.

Yes, they “admit”, the administration has made some mistakes.

But, on balance, its actions have supported business – to say the least.

So before leveling such fierce criticism, corporate America should remember the president’s actual record,

according to a piece in the New York Times by investment banker Roger Altman, Deputy Treasury Secretary during the first Clinton administration,

and a close colleague of the man who really handed the Democrats over to big business, the inimitable Robert Rubin.

First, Mr. Obama inherited an economy teetering on the brink of depression.

True – but you don’t say that’s because it had been preceded by eight intense,

and 30 chronic, years of government give-aways to corporations,

and a complete lack of effective / intelligent / principled regulation.

Immediately upon taking office, he forged a $787 billion economic stimulus program, and is wisely trying to expand it now.

Was this program perfect? Of course not. But it has been effective.

Okay, Rog, whatever you say.

But that IS how Democrats get themselves into trouble – by pretending things are great when in fact they’re terrible,

which, of course, gives the conscience-less Republicans all the opening they need

to tap into the fear, anger and insecurity that are legitimately there.

Second, at that same time, the credit markets were in tatters and simply not functioning.

And they’re still not, as our piece on the collapse of small business lending made abundantly clear.

The administration submitted the biggest banks to confidence-building stress tests,

which, Roger, no one took at all seriously, as well they shouldn’t, as the continuing run of bank failures confirms.

It skillfully invested in financial institutions – if “skillfully” is what you call it – kept the mortgage markets afloat – really ??? –

and undertook other creative initiatives to solidify the financial industry –

These have worked more quickly and more successfully than anyone predicted.

The system is healthy again, according to Altman.

Again, this is where the Democrats always get into trouble –

pretending things are great when they are in fact disastrous.

All this has led directly to a turnaround in corporate profits, share prices and liquidity.

Now, how long this is going to last is another question – but he IS right about this.

Profits have increased 41 percent since President Obama was elected.

And the Dow Jones Industrial Average has risen 28 percent over the same period.

These are strong results.

So what on earth IS the business “community” complaining about all the time ???

Third, the president made the courageous decision to put General Motors and Chrysler through bankruptcy.

As a result, both survived and, today, G.M. in particular is coming back fast — along with its hundreds of suppliers.

Moreover, taxpayers are likely to recover the full value of their investment in the company.

Maybe – maybe not. But the issue is hardly settled.

Fourth, Mr. Obama has made big progress toward restoring America’s standing around the world.

This is perhaps the saddest thing, because it’s SO not true – as I personally can attest from living in Singapore.

People still LIKE the United States, but every day show less and less respect for it – as they, in our view, have every right to feel.

Two years ago, it stood at a historically low point, and multinationals were encountering resistance in penetrating foreign markets.

Both of which were certainly true – now, only the latter is,

although no one can doubt the absence of Cheney / Bush from the public stage is certainly appreciated the world over.

The president’s reframing of our global priorities and values has returned the United States to pre-eminence — and is starting to ease our way to opening new markets abroad.

Again, Roger that is just not true – self-delusion if you believe it, and cynical if you’re just saying it because it sounds good.

And, once again, this “new markets abroad” is a fantasy – not to mention the fact the US is NOT an export economy,

no matter how often even the most un-conventional economists and their sadly benighted students claim it.

So this is not only not true, dude – it’s totally irrelevant.

A top issue for these business groups, and properly so, is education policy.

That’s because a better educated work force is a more productive one.

Oh really – tell it to the Chinese.

It is right in this regard, Altman maintains.

Nevertheless, as we at EconomyWatch have noted,

business is way ahead of the administration and everyone else in terms of how to manipulate the system.

But financial reform was mandatory.

And while some on Wall Street naturally don’t like it, MOST IN OUR COMMUNITY VIEW IT AS RELATIVELY HARMLESS.

You catch that – “most in our community view it as relatively harmless”.

Which is, of course, exactly our point –

Obama may be making a show of being “tough,” although it’s certainly not very convincing,

and no one is taking it very seriously – least of all the people who are criticizing him the most.

What adjustments should President Obama make to repair ties with business?

One idea is to recruit a senior industry figure for one of the four or five key economic policy positions.

Anyone with half a brain in their head knows already Obama is doing all the heavy lifting for them anyway – why take a lower salary and all the aggravation ???

Unless, of course, it’s Roger himself who’s angling for a spot.

Beyond that, there is skepticism over the president’s commitment to reducing the huge and dangerous budget deficits which America now faces.

But neither the Republicans nor business have anything to worry about,

since, despite the fact it was Reagan and Cheney / Bush who created the vast majority of that Federal debt,

everyone is following the Faux News-line that it’s all Obie and his so-called / self-styled / alleged stimulus plan.

would earn deeper credibility with business and with all Americans, in Altman’s view.

Not to mention throwing even more people out of work

and heading into the 1937-like deflationary spiral down which we’re already traveling.

Another problem is that the administration’s rhetoric — which too often employs inflammatory words like “reckless” — has the effect of tarring all of business with the same brush.

The White House, he says, might better distinguish between Wall Street, Big Oil and health insurers, which have all incurred public wrath, and the majority of businesses, which haven’t.

Except, we say, it’s precisely those that have incurred public wrath

that Obama has proven himself the most committed to helping in any way possible.

The tension between President Obama and the business community is hurting both sides and may hamper economic recovery.

No, it’s hurting Obama and has nothing to do with economic recovery, Roger –

as you well know, and are just throwing in because it sounds like it’s a criticism that MIGHT stick … but probably won’t … ;-) …

Closing that divide requires the business community to mute its criticism –

which you know they won’t do, since they’re making so much headway with it –

and the administration to make personnel and policy adjustments.

What more could they possibly want from what they’re getting, Roger ???

Neither should be hard.

And certainly neither is correct.

Which brings us to our closing thought, and it’s not a happy one.

In the aftermath of the horror of 9/11, we recorded a 20-CD lecture series entitled the Millennium Crisis,

which we have updated periodically,

in both writing and lectures,

whose main argument was that the catastrophe of the Twin Towers was NOT the first stage in the crisis, but, rather, the third.

Beyond that, we argued that the fundamental problem in ALL parts of the world was the low level of public discourse – Lecture 3.

Unfortunately, in the nearly 10 years since we recorded those initial lectures,

we’ve been more saddened than happy to be constantly proven right.

And what’s happening in the US now is only an indication of how that key problem continues to get worse and worse nearly every day.

Because if Obama is “anti-business,” then it’s frightening to think what a President who’s “pro-business” would look like.