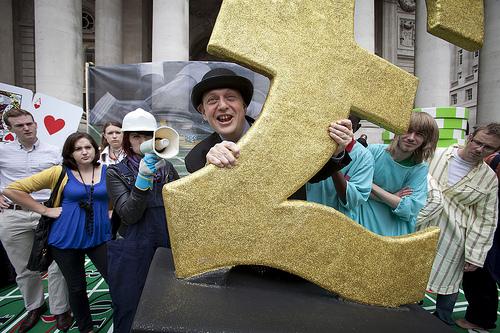 Unlike other recently ousted bank CEOs, Barclay’s Bob Diamond was a banker supposedly at the top of his game. Nevertheless, Diamond met his (figurative) demise after he forgot that the continued existence of any bank with a large balance sheet depends largely on maintaining a good relationship with regulators. The Libor scandal though is only the beginning: Although banks still remain powerful on the surface, their legitimacy continues to crumble.

WASHINGTON, DC – The recent departure of Robert Diamond from Barclays marks a watershed. To be sure, CEOs of major banks have been forced out before. Chuck Prince lost his job at Citigroup over excessive risk-taking in the run-up to the financial crisis of 2008, and, more recently, Oswald Grübel of UBS was pushed out for failing to prevent unauthorized trading to the tune of $2.3 billion.

But Diamond was a banker supposedly at the top of his game. Barclays, it was claimed, had come through the 2008-2009 crisis without benefiting from government support. And, while his bank had been found in violation of various rules recently, including on products sold to consumers and on how it reported interest rates, Diamond had managed to distance himself from the damage.

Press reports indicate that regulators were willing to give Diamond a free pass – right up to the moment when a serious political backlash took hold. Diamond started to fight back, pointing an accusatory finger at the Bank of England. At that point, he had to go.

Related: The Grand Charade Of UK’s Most Dangerous Banker

Related: Who Watches The Financial Watchdogs In The UK?

There are three broader lessons of Diamond’s demise at Barclays.

First, the political backlash was not from backbenchers or uninformed spectators on the margins of the mainstream. Top politicians from all parties in the United Kingdom were united in condemning Barclays’ actions, particularly with regard to its systemic cheating on the reporting of interest rates, exposed in the Libor scandal. (The London Interbank Offered Rate is a key benchmark for borrowing and lending around the world, including for the pricing of derivatives).

Indeed, Chancellor of the Exchequer George Osborne went so far as to say, “Fraud is a crime in ordinary business; why shouldn’t it be so in banking?” His clear implication is that fraud was committed at Barclays – a serious allegation from Britain’s finance minister.

After five years of global financial-sector scandals on a grand scale, patience is wearing thin. As Eduardo Porter of The New York Times put it,

“Bigger markets allow bigger frauds. Bigger companies, with more complex balance sheets, have more places to hide them. And banks, when they get big enough that no government will let them fail, have the biggest incentive of all.”

Related: How Goldman Sachs Became The Most Hated Bank On Earth

Second, Diamond apparently thought that he could take on the British establishment. His staff leaked the contents of a conversation he claimed to have had with Paul Tucker, a senior Bank of England official, suggesting that the BoE had told Barclays to report inaccurate interest-rate numbers.

Diamond apparently forgot that the continued existence of any bank with a balance sheet that is large relative to its home economy – and its ability to earn a return for shareholders – depends entirely on maintaining a good relationship with regulators. Barclays has total assets of around $2.5 trillion – roughly the size of the UK’s annual GDP – and is either the fifth- or eighth-largest bank in the world, depending on how one measures balance sheets. Banks at this scale benefit from huge implicit government guarantees; this is what it means to be “too big to fail.”

Diamond apparently believed his own rhetoric – that he and his bank are critical to economic prosperity in the UK. The regulators called his bluff and forced him to resign. Barclays’ stock price rose slightly on the news.

The final lesson is that the big showdowns between democracy and big bankers are still to come – both in the United States and in continental Europe. On the surface, the banks remain powerful, yet their legitimacy continues to crumble.

Jamie Dimon, CEO of JP Morgan Chase, presided this year over reckless risk-taking to the tune of nearly $6 billion (we might call it a “three Grübel” debacle), yet his job apparently remains secure. Dimon even remains on the board of the Federal Reserve Bank of New York, despite the fact that the New York Fed is deeply involved in the investigation not only of JP Morgan Chase’s trading losses, but also of its potential involvement in the broadening Libor scandal.

As Dennis Kelleher, the president of the advocacy group Better Markets, documented in recent congressional testimony, two years after the passage of the Dodd-Frank legislation, the US banking system continues to fight hard – and effectively – to undermine meaningful reform. (Kelleher’s testimony is a must-read assessment, as is his opening statement to the hearing).

But progress is nonetheless being made. Dimon is the public face of megabanks’ resistance to reform; repeated and public egg on this particular face strengthens those who want to rein in these banks’ excessive and irresponsible risk-taking.

Related: Breeding The Culture of Greed: Behind Big Banking Bonuses In The UK

Meanwhile, the European situation looks explosive. The European Union’s approach to bank regulation encouraged financial institutions to load up on government debt – supposedly a “risk-free” asset. Now, given the profound sovereign-debt crisis in the eurozone periphery, government defaults threaten to take down the big banks. The European Central Bank has provided a great deal of emergency “liquidity” funding to banks, which they use to buy even more government debt. This holds down interest rates on that debt in the short run, but creates even bigger potential losses in the case of potential default.

Banks and politics are deeply intertwined in all advanced economies. Diamond discovered that, ultimately, politicians trump bankers – at least in the UK.

But what really matters is legitimacy and informed public opinion. Do you really believe the increasingly dubious notion that megabanks, as currently constituted, are good for the rest of the private sector, and thus for economic growth and job creation? Or do you begin to consider more seriously the increasingly mainstream proposition that global megabanks and their leaders have simply become too powerful and dangerous?

Simon Johnson is a former chief economist of the IMF and the co-founder of a leading economics blog, http://BaselineScenario.com. Johnson is also a professor at MIT Sloan, a senior fellow at the Peterson Institute for International Economics, and the co-author, with James Kwak, of White House Burning: The Founding Fathers, Our National Debt, and Why It Matters to You.

See also: The Grand Charade Of UK’s Most Dangerous BankerSee also: UK’s Alarming Apathy Towards Its Banking Sector’s CriminalitySee also: Who Watches The Financial Watchdogs In The UK?