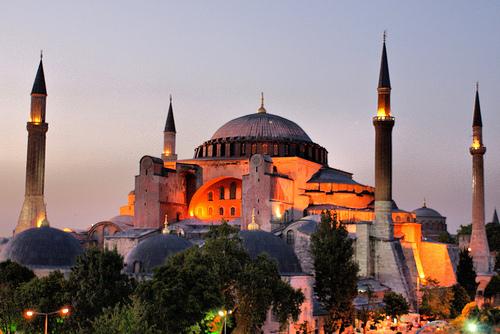 For decades, Turkey has been told it was not ready to join the European Union —

that it was too backward economically to qualify for membership in the now 27-nation club.

That argument may no longer hold.

with a core of internationally competitive companies turning the youthful nation into an entrepreneurial hub,

tapping cash-rich export markets in Russia and the Middle East

while attracting billions of investment dollars in return.

For many in aging and debt-weary Europe,

which will be lucky to eke out a little more than 1 percent growth this year,

last week it reported a stunning 11.4 percent expansion for the first quarter, second only to China —

who needs the other one more — Europe or Turkey?

“The old powers are losing power, both economically and intellectually,”

“And Turkey is now strong enough to stand by itself.”

It is an astonishing transformation for an economy that, just 10 years ago,

had a budget deficit of 16 percent of gross domestic product and inflation of 72 percent.

It is one that lies at the root of the rise to power of Prime Minister Recep Tayyip Erdogan,

who has combined social conservatism with fiscally cautious economic policies

to make his Justice and Development Party, or A.K.P.,

the most dominant political movement in Turkey since the early days of the republic.

if it ever does get into the European Union —

than most of the troubled economies already in the euro zone.

It is well under the 60 percent ceiling on government debt at 49 percent of G.D.P.,

and could well get its annual budget deficit below the 3 percent benchmark next year.

That leaves the reduction of inflation, now running at 8 percent, as the only remaining major policy goal.

“This is a dream world,” said Husnu M. Ozyegin, who became the richest man in Turkey

when he sold his bank, Finansbank, to the National Bank of Greece in 2006.

Sitting on the rooftop of his five-star Swiss Hotel, he was looking at his BlackBerry,

scrolling down the most recent credit-default spreads for euro zone countries.

He still could not quite believe what he was seeing.

“If you had told me 10 years ago that Turkey’s financial risk would equal that of Italy I would have said you were crazy.”

Having sold at the top to Greece, Mr. Ozyegin is now putting his money to work in the east.

His new bank, Eurocredit, gets 35 percent of its profit from its Russian operations.

that has embraced the Erdogan government for its economic successes.

has been the rapid rise of socially conservative business leaders

who, under the A.K.P., have seen their businesses thrive

He drives a Ferrari to work, but he is also a practicing Muslim who does not drink and has no qualms in talking about his faith.

He is not bound to the 20th-century secular consensus among the business, military and judicial elite

that fought long and hard to keep Islam removed from public life.

On the wall behind his desk is a framed passage in Arabic from the Koran,

and he recently financed an Islamic studies program just outside Washington at George Mason University in Fairfax, Va.,

where Mr. Erdogan recently spoke, according to this fascinating article in the New York Times.

or Israeli irrigation technology for his sideline almond and walnut growing business,

Mr. Ak represents the flexible dynamism — both social and economic —

that has allowed Turkey to expand the commercial ties

that now underpin its ambition to become the dominant political actor in the region.

Other prominent members of this newer group of business executives are Mustafa Latif Topbas,

the chairman and a founder of the discount-shopping chain BIM,

and Murat Ulker, who runs the chocolate and cookie manufacturer Yildiz Holding.

With around $11 billion in sales, Yildiz Holding supplies its branded food products

not just to the Turkish market but to 110 markets globally.

It has set up factories in Kazakhstan, Pakistan, Saudi Arabia and Ukraine and now owns the Godiva brand.

The two billionaires have deep ties to the prime minister —

Mr. Erdogan once owned a company that distributed Ulker-branded products, and Mr. Topbas is a close adviser —

that a boost from the government is now no longer needed.

In June, Turkish exports grew by 13 percent compared with the previous year,

with much of the demand coming from countries on Turkey’s border or close to it, like Iraq, Iran and Russia.

With their immature manufacturing bases, they are eager buyers

This year, for example, the country’s flagship carrier, Turkish Airlines, will fly to as many cities in Iraq (three) as it does to France.

Some of its fastest growing routes are to Libya, Syria and Russia,

Turkey’s largest trading partner, where it flies to seven cities.

That is second only to Germany, which has a large population of immigrant Turks.

In Iraq, the Acarsan Group, based in the southeastern town of Gaziantep, just won a bid to build five hospitals.

And Turkish construction companies have a collective order book of over $30 billion, second only to China.

On the flip side, the Azerbaijani government owns Turkey’s major petrochemicals company

and Saudi Arabia has been a big investor in the country’s growing Islamic finance sector.

No one here disputes that these trends give Mr. Erdogan the legitimacy — both at home and abroad —

to lash out at Israel and to cut deals with Iran over its nuclear energy,

moves that have strained ties with its chief ally and longtime supporter, the United States.

Turkey has exported $1.6 billion worth of goods to Iran and Syria this year, $200 million more than to the United States.

perhaps the result of tightening election polls at home —

and that the aggressive tone with Israel may jeopardize the defining tenet of Turkey’s founder, Mustafa Kemal Ataturk:

peace at home, peace in the world.

“The foreign policy of Turkey is good if it brings self-pride,”

a conglomerate that itself is in negotiations with the Syrian government

to set up a factory in Syria that would make electricity meters.

Even so, he warns that it would be a mistake to become too caught up in an eastward expansion

to look to the West for innovation and inspiration.

“It takes centuries to make relations and minutes to destroy them,” he said.