Times of Trouble: Can Christine Lagarde Lead the IMF Through its Toughest Period? 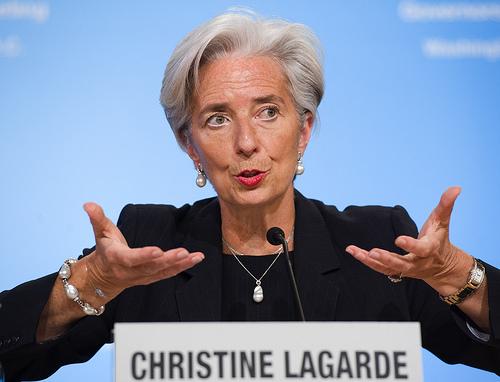 To most regular observers, the appointment of Christine Lagarde as IMF’s Managing Director came as no surprise. Lagarde had been seen as the overwhelming favourite to replace Dominique Strauss-Kahn and was duly elected despite calls for a candidate from an emerging economy. However, the challenges for Lagarde are great. While Lagarde may undoubtedly have the credentials to run one of the world’s most influential financial organisations, doubts will remain over her actual ability until she proves herself worthy of the role. Former IMF Chief Economist Raghuram Rajan believes that Lagarde arrives at a pivotal, but extremely challenging, period for the IMF wherein her success, or failure, may have a deep impact for the world economy.

See the Slide Show >>> The Evolution of Christine Lagarde’s Career

CHICAGO – Now that the dust has settled over the selection of the International Monetary Fund’s managing director, the IMF can return to its core business of managing crises. Christine Lagarde, a competent and well-regarded technocrat, will have her hands full with three important challenges.

The first, and probably easiest, challenge is to restore the IMF’s public image. While the criminal case against Dominique Strauss-Kahn on sexual-assault charges now seems highly uncertain, the ensuing press focus on the IMF suggests an uncontrolled international bureaucracy with unlimited expense accounts, dominated by men with little sense of restraint.

Fortunately, the truth is more prosaic. Top IMF staff face strict limits on their allowable business expenses (no $3,000 per night hotel rooms, despite reports in the press), and are generally underpaid relative to private-sector executives with similar skills and experience.

The IMF, like many organizations where workers spend long trips together, has its share of intra-office romances. But the environment is professional, and not hostile to women. A previous incident in which Strauss-Kahn was let off lightly for an improper relationship with a subordinate clearly suggests that the Fund needs brighter lines for acceptable behaviour and tougher punishment for transgressions. But other organizations have dealt with similar issues; the IMF needs to make the necessary changes, and, equally important, get the message out that the DSK incident was an aberration, not the tip of the proverbial iceberg.

The second, and perhaps most difficult, challenge facing Lagarde, is the mess in Europe, where the IMF has become overly entangled in eurozone politics. Typically, the IMF assesses whether a country, after undertaking reasonable belt-tightening measures, can service its debt – and lends only when it is satisfied that it can. The entire objective of IMF lending is to help finance the country while it makes adjustments and regains access to private borrowing. This also means that a country with too much debt should renegotiate it down before getting help from the IMF, thereby avoiding an unsustainable repayment burden.

Perhaps swayed by promises of eurozone financial support (and Europe’s desire to prevent default-fueled financial contagion from spreading to countries like Spain and possibly Italy), the IMF took a rosier view of debt sustainability in countries like Greece than it has in emerging markets. But this has not “helped” such countries, for the availability of soft credit from the eurozone or the Fund only enables a greater accumulation of debt.

Ultimately, debt can be repaid only if a country produces more than it spends. And the higher the debt, the less likely it is that the country will be able to achieve the mix of belt-tightening and growth that would enable it to generate the necessary surpluses. Delayed restructuring eventually means more painful restructuring – after many years of lost growth.

If troubled eurozone countries, especially Spain, start growing rapidly again, there is still a “muddle-through” outcome that might work. With too-big-to-save countries like Spain in the clear, the debt of highly-indebted peripheral countries like Greece could be written down through interest waivers, maturity extensions, and debt exchanges. The eurozone – and the European Union – could survive its fiscal crisis intact.

But having failed to insist on an up-front restructuring, the IMF will face problems. With private investors reluctant to lend more or even to roll over existing debt, the bulk of Greek debt at the time of any restructuring (or whatever it is euphemistically called) will be from the official sector. How the resulting losses imposed on debt holders will be divided between the various eurozone institutions and the IMF is anyone’s guess. For the first time in its history, the Fund might have to take a significant “haircut” on its loans, and it will have to prepare its non-European shareholders for it.

A More Diverse and Transparent IMF?

A greater dilemma will emerge if the muddle-through strategy does not seem to be working. At some point, the IMF’s strategy, which should be focused on the distressed country’s citizens and its creditors, should depart from that of the eurozone, which is more willing to sacrifice individual countries’ interests for the larger interest of the monetary union. Lagarde’s challenge will be to chart a strategy for the IMF that is independent of the eurozone’s strategy, even though she has been intimately involved in formulating the latter.

Related: The Long and Winding Road to Recovery

The third challenge for Lagarde concerns the circumstances of her election. It is not inconceivable that a number of emerging-market countries will get into trouble in the next few years. Will the Fund require the tough policy changes it has demanded of countries in the past, or will Lagarde’s need to show that she is not biased towards Europe mean that future IMF interventions will become more expansive and less demanding? A kinder, gentler Fund is in no one’s interest, least of all the distressed countries and the world’s taxpayers.

Finally, there is a challenge that seems to be pressing, but is not. In her campaign for the position, Lagarde emphasized the need for diversity among the IMF’s top management. But what is really needed is the selection and promotion of the best people, regardless of national origin, sex, or race.

Clearly, the IMF’s existing culture and history will bias its selection and promotion of staff towards a certain type of person (for example, holders of PhDs from US universities). That commonality in backgrounds among IMF personnel allows the Fund to move fast in country rescues, not wasting time in endless debate. In the long run, more diversity is needed. But if it is attempted too quickly, in order to paper over the fact that a European is in charge once again, the Fund risks jeopardizing its key strength.

The IMF is perhaps the central global multilateral economic institution at a time when such institutions are needed more than ever. Lagarde arrives to lead it at a difficult time. We all have a stake in her success.

Raghuram Rajan served as IMF’s Chief Economist from September 2003 to January 2007. In 2003, Rajan was the inaugural recipient of the Fischer Black Prize awarded by the American Finance Association for contributions to the theory and practice of finance by an economist under the age of 40. Rajan is currently the Eric J. Gleacher Distinguished Service Professor of Finance at the Booth School of Business at the University of Chicago, and was voted by Economist readers as the economist with the most important ideas in the post-financial crisis world.