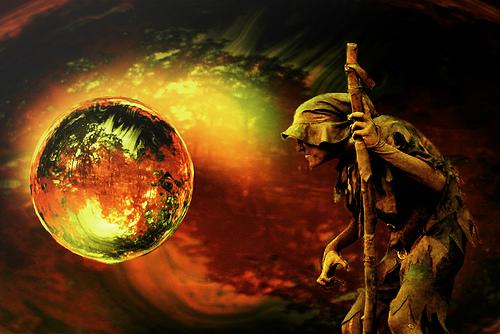 Speculative bubbles, or market bubbles, have often been seen as the cause of financial crises. But, before we conclude that we should rein in the markets, we need to consider the alternative: that bubbles are actually social epidemics that could arise even in the absence of financial markets.

NEW HAVEN – The speculative bubbles in the housing, equity, and commodity markets that preceded and accompanied the current global financial crisis are also its ultimate cause. But it would be a mistake to conclude from this that shutting down speculative markets, or slowing them down by imposing a financial transactions tax, as many propose these days, would make things better.

A speculative bubble is a social epidemic whose contagion is mediated by price movements. News of price increase enriches the early investors, creating word-of-mouth stories about their successes, which stir envy and interest. The excitement then lures more and more people into the market, which causes prices to increase further, attracting yet more people and fueling “new era” stories, and so on, in successive feedback loops as the bubble grows. After the bubble bursts, the same contagion fuels a precipitous collapse, as falling prices cause more and more people to exit the market, and to magnify negative stories about the economy.

But, before we conclude that we should now, after the crisis, pursue policies to rein in the markets, we need to consider the alternative. In fact, speculative bubbles are just one example of social epidemics, which can be even worse in the absence of financial markets. In a speculative bubble, the contagion is amplified by people’s reaction to price movements, but social epidemics do not need markets or prices to get public attention and spread quickly.

Related: The Boom and Bust Cycle: A Financier's Best Friend

Some examples of social epidemics unsupported by any speculative markets can be found in Charles MacKay’s 1841 best seller Memoirs of Extraordinary Popular Delusions and the Madness of Crowds. The book made some historical bubbles famous: the Mississippi bubble 1719-20, the South Sea Company Bubble 1711-20, and the tulip mania of the 1630’s. But the book contained other, non-market, examples as well.

MacKay gave examples, over the centuries, of social epidemics involving belief in alchemists, prophets of Judgment Day, fortune tellers, astrologers, physicians employing magnets, witch hunters, and crusaders. Some of these epidemics had profound economic consequences. The Crusades from the eleventh to the thirteenth century, for example, brought forth what MacKay described as “epidemic frenzy” among would-be crusaders in Europe, accompanied by delusions that God would send armies of saints to fight alongside them. Between one and three million people died in the Crusades.

There was no way, of course, for anyone either to invest in or to bet against the success of any of the activities promoted by the social epidemics – no professional opinion or outlet for analysts’ reports on these activities. So there was nothing to stop these social epidemics from attaining ridiculous proportions.

MacKay’s examples may seem a bit remote to us now. Some examples that we might relate to better can be found in the communist, centrally planned economies of much of the twentieth century, which also had no speculative markets. To be sure, events in these economies might seem attributable simply to their leaders’ commands. But social contagions took hold in these countries even more powerfully than they have in our “bubble” economies.

China’s Great Leap Forward in 1958-61 was a market-less investment bubble. The plan involved both agricultural collectivization and aggressive promotion of industry. There were no market prices, no published profit-and-loss statements, and no independent analyses. At first, there was a lot of uninformed enthusiasm for the new plan. Steel production was promoted by primitive backyard furnaces that industry analysts would consider laughable, but people who understood that had no influence in China then. Of course, there was no way to short the Great Leap Forward. The result was that agricultural labour and resources were rapidly diverted to industry, resulting in a famine that killed tens of millions.

The Great Leap Forward had aspects of a Ponzi scheme, an investment fraud which attempts to draw in successive rounds of investors through word-of-mouth tales of outsize returns. Ponzi schemes have managed to produce great profits for their promoters, at least for a while, by encouraging a social contagion of enthusiasm. Mao Zedong, on visiting and talking to experts at a modern steel plant in Manchuria, is reported to have lost confidence that the backyard furnaces were a good idea after all, but feared the effects of a loss of momentum. He appears to have been worried, like the manager of a Ponzi scheme, that any hint of doubt could cause the whole movement to crash. The Great Leap Forward, and the Cultural Revolution that followed it, was a calculated effort to create a social contagion of ideas.

Related: When Will The $1 Trillion Student Debt Bubble Burst?

Related: Infographic: Is Higher Education the Next Big Bubble?

Some might object that these events were not really social epidemics like speculative bubbles, because a totalitarian government ordered them, and the resulting deaths reflect government mismanagement more than investment error. Still, they do have aspects of bubbles: collectivization was indeed a plan for prosperity with a contagion of popular excitement, however misguided it looks in retrospect.

The recent and ongoing world financial crisis pales in comparison with these events. And it is important to appreciate why. Modern economies have free markets, along with business analysts with their recommendations, ratings agencies with their classifications of securities, and accountants with their balance sheets and income statements. And then, too, there are auditors, lawyers and regulators.

All of these groups have their respective professional associations, which hold regular meetings and establish certification standards that keep the information up-to-date and the practitioners ethical in their work. The full development of these institutions renders really serious economic catastrophes – the kind that dwarf the 2008 crisis – virtually impossible.

Robert J. Shiller is a Professor of Economics at Yale University and author of Finance and the Good Society. Shiller also Served as Vice President of the American Economic Association in 2005, and President of the Eastern Economic Association for 2006-2007. He is also known to have developed the Case-Shiller Index, which are constant-quality house price indices used by Standard & Poor’s for the United States.