The Return Of Fixed Exchange Rates: A Costly Response To ‘Currency Wars’? 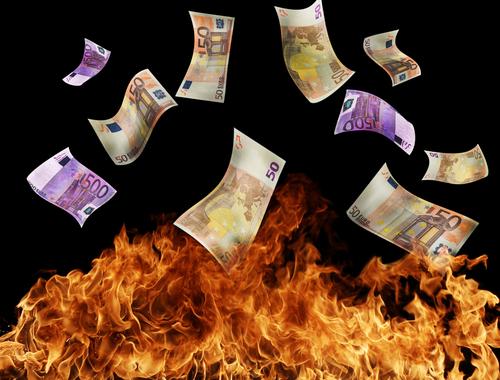 The ongoing depreciation of currencies in advanced economies has forced several emerging countries to empty their foreign reserves in order to maintain exchange rates. Is this policy sustainable in the long-term; and why are countries willing to fix their exchange rates despite the risk of their reserves running dry?

The development of the global economic crisis sharpened the problem of national monetary policy in countries outside monetary unions. In order to return exports back to pre-crisis levels, many countries reduced the value of their national currencies – reformatting the zones of influence on foreign markets and taking advantage of the crisis consequences on competitors.

In 2010, Brazilian Finance Minister Guido Mantega first warned that a new ‘Currency War’ was brewing as a result of such policies. In September 2012, Mantega repeated his warning, claiming that the round of monetary stimulus in the U.S. (the Q3 Quantitative Easing) would further reduce the value of the dollar in comparison to other currencies, thus hitting the export competitiveness of developing countries, including Brazil.

According to Mantega, the devaluation of the dollar has reduced the value of dollar-denominated foreign exchange reserves in Brazil because Brazil had little choice but to contain the relative growth of its own currency in order to preserve the positions of its exporters.

Why then are countries still persistent in fixing their exchange rates, despite a loss in their reserves? Is this a correct financial policy? 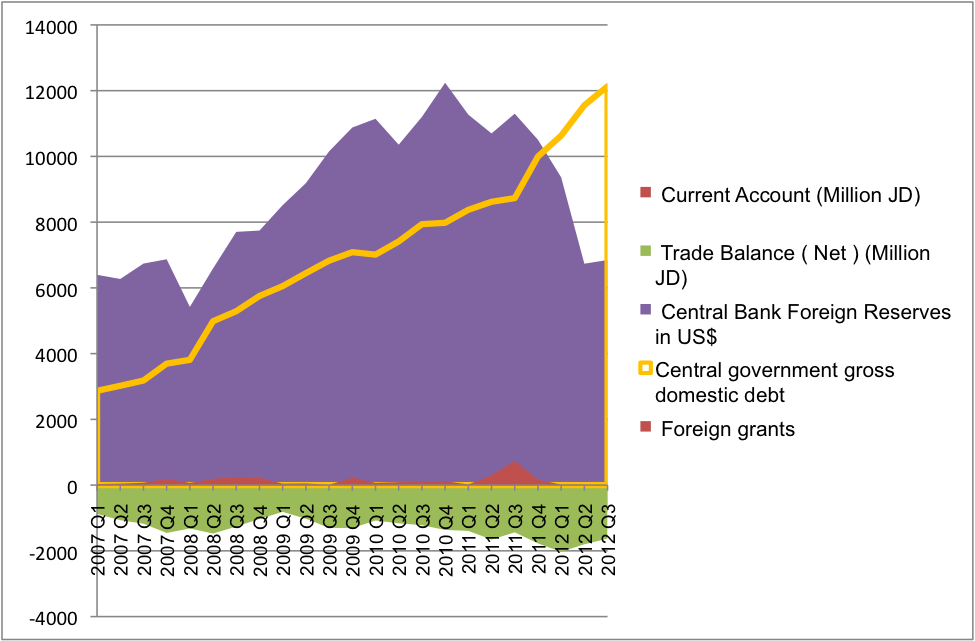 As we can see from the diagram above, the Bank of Jordan, despite a stable negative trade balance, attempted to increase its foreign reserves by engaging grants and increasing the national debt. This need, besides the sagging of economy, was dictated by the policy of the national currency rate retention at the same level as 0.709.

As a result, since the first quarter of 2012, the struggle to keep the level of reserves in the context of the ongoing crisis in the global economy has become extremely difficult. This has led to a sharp decline of foreign reserves at 24.36 percent at the end of 2011. By this time the level of state debt has increased by 6 times.

Another country, Morocco lost DH 21 billion in foreign exchange reserves in 2011, reaching the level of $20 billion, according to a statement by Bank Al-Maghrib, the country’s central bank.  Its foreign exchange reserves have been in steady decline since 2007. In contrast, net claims on the central government increased by 29.1 percent, due to higher borrowings from the other depository corporations. So Morocco’s foreign reserves fell by 11.82 percent over 2011. But, again we can see the policy of supporting the currency rate of DH after 2008 without significant changes.

A similar picture is seen in Egypt. After the events in Tahrir Square in 2011, the government has been routing the foreign currency mainly to support the economy and national currency – the Egyptian pound. The Central Bank of Egypt tried to restrain the fall of the national currency, keeping it due to interventions. But they dried the reserves –by 18.35 percent only in 2011. Egypt’s reserves have plunged by more than a half since the uprising, which has scared away tourists and investors, two of Egypt's main income sources.

In Tunisia foreign reserve level fell down from 13672 mln TD in 2010 to 11281 in 2011. But this became a reality due to Jasmine revolution that hit the tourists and investments inflow. But despite the collapse of reserves, government fixed the exchange rate on the same level.

In Ukraine, there is a discussion about the necessity of currency devaluation. Drawdown of the leading export industries has reduced the inflow of foreign currency into the country. In this case, there has been the reduction of reserves since August 2011. But the National Bank of Ukraine together with the government decided to maintain the level of currency exchange rate near 8 UAH per USD. So the main losses of foreign reserves occur through the currency interventions of Central bank. The negative trade balance of around $13 billion in 2012 is background of that policy. The only one way to maintain reserves today is to continue state loans and IMF support: In other words – to increase state debt.

The practice of keeping the rates fixed regardless of the reduction of reserves does not look quite an effective policy. However, we believe that in this way the governments want to prevent civil unrest caused by inflation. The devaluation of the national currency in countries with a negative trade balance may cause commodity prices to become much more expensive, leading to a rise in the level of poverty and the risk of social unrest.

Statistics show that in the aboved mentioned countries – Jordan, Morocco, Egypt, Tunisia, Honduras and Ukraine – inflation rates are now relatively low. Thus relatively cheap import helps to avoid shortages and price increases. This supports the stability of political regimes. However, this policy also indicates that there is no further development strategy and governments are only hoping for improvements on the global markets.

Continuation of the policy of spending reserves by central banks for interventions has its limits. They are in general deficit of credit resources, amounts of public debt, which affects the cost of such loans. Thus, this policy would help to pump up public debts of some countries.

None of these countries, which showed decrease in reserves in 2011 did not stop the support of currency rates for today. So we can draw some conclusions from our analysis:

1. Retention of exchange rates is due to the threat of unrest provoked by increasing of import prices.

2. Countries that show the greatest drawdown of foreign reserves have a negative trade balance and have no opportunity to build up reserves without loans.

3. Maintaining the exchange rate leads to growth of public debt.

4. Maintaining the exchange rate leads to a deterioration of the competitiveness of national products.

5. Falling of reserves reaches a critical level of import ensuring and then the government turns to external borrowing.