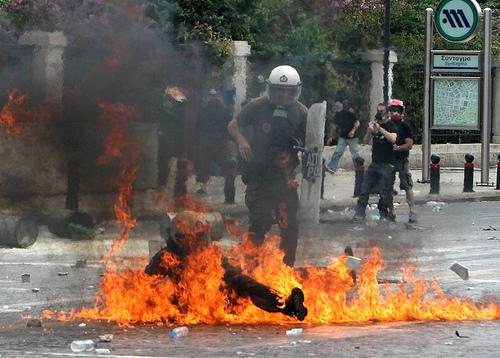 With Europe on the brink of recession and recovery in the US finally getting some traction, the case for fiscal consolidation appears increasingly weak. But the case becomes stronger when one considers Asian countries' path from crisis in the late 1990's to astounding growth and prosperity today.

NEW HAVEN – The austerity debate was the topic du jour at this year’s World Economic Forum in Davos. With good reason. Europe is slipping back into recession just when recovery in the United States is finally getting some traction.  That has undermined the case for fiscal consolidation, which is so heavily favoured in Europe.

Yet I took away a different conclusion from Davos. I moderated a session on “The New Context in East Asia,” addressed by a panel of senior representatives from Thailand, South Korea, Malaysia, Singapore, and Japan. With the exception of the Japanese participant, all had first-hand experience with the devastating Asian financial crisis of the late 1990’s.

I couldn't resist the temptation to draw Asia into the debate between Europe and the US. Rather than ask the Asian panelists to theorize about the impact of austerity in the overly indebted developed West, I asked them to assess their own experiences during and after the crisis of the late 1990’s.

Frankly, I was surprised by what I heard. The panelists agreed on two points: first, they initially detested the wrenching adjustment programs dictated by the terms of the International Monetary Fund’s so-called conditional bailouts (the South Koreans still refer scornfully to the “IMF crisis” of the late 1990’s).

Second – and here’s where the surprise came – they all agreed that, with the benefit of hindsight, these excruciating adjustments were worth it, because their crisis-torn economies were forced to embrace structural reforms that paved the way for their spectacular economic performance today.

On the surface, the numbers speak for themselves. In 1998, during the depths of the Asian crisis, aggregate output in the so-called ASEAN-5 – Indonesia, Malaysia, the Philippines, Thailand, and Vietnam – plunged by 8.3 percent. Real GDP in South Korea – long considered the darling of Asia’s newly industrialized economies – contracted by 5.7 percent that year. But then the tough conditionality of IMF bailouts and adjustment programs – Asia’s own dose of austerity – kicked in.

Since then, the region has never looked back. Within two years, most of Asia’s crisis-ridden economies had regained their pre-crisis peaks. Nor was this a temporary rebound. Beginning in 1999, the ASEAN-5 began a ten-year spurt of 5 percent average annual GDP growth (5.5 percent in South Korea over the same period). In short, there were no lasting negative effects from the short-term dose of austerity, and, to the extent that austerity was essential to post-crisis healing, the long-term benefits have proven to be both enduring and astounding.

Three lessons for the rest of us come to mind. First, there is no gain without pain. Few of us in the developed world can fathom aggregate-output contractions on the scale that crisis-torn Asia suffered in 1998, let alone muster the political will to impose them on our economies. The economic dislocations and the humiliation of proud nations were, indeed, devastating (as Greeks today can attest). But, once the excesses were purged, Asia’s post-crisis rebounds were both strong and sustainable.

Second, currencies played an important role as an escape valve in the early days of Asia’s post-crisis adjustment process. As the region moved from hard exchange-rate pegs to floating rates, Asian currencies plunged – with drops against the dollar ranging from 28 percent in South Korea and roughly 37 percent in Thailand, Malaysia, and the Philippines to almost 80 percent in Indonesia.

Finally, there is no substitute for restructuring. In Asia in the late 1990’s, measures aimed at the financial sector dominated IMF-imposed structural adjustment programs, but there were also programs that focused on tax and expenditure reforms, corporate governance, privatization, and business-debt restructuring. While not all of these programs were implemented in strict compliance with IMF conditionality, they played a key role in promoting significant improvements in Asian competiveness.

None of these lessons should be lost on either Europe or the US. While individual countries obviously lack currency flexibility in a monetary union – one of Europe’s most obvious and important differences from Asia in the late 1990’s – there is nothing to prevent a depreciation of the euro from boosting pan-regional competitiveness. The same, of course, is true of the US dollar.

But no country – or group of countries, in Europe’s case – has ever devalued its way back to prosperity. So Asia’s structural lessons are equally important to the developed world. Indeed, Germany’s economy is out-competing and out-growing the rest of Europe, largely owing to labour-market reforms and deregulation. The same medicine might prove equally beneficial to the rest of Europe – to say nothing of the US, which faces a major competitiveness challenge of its own.

In the end, Asia’s developing economies had no choice but to accept draconian measures as the price of bailouts in the late 1990’s. It remains to be seen if rich developed countries are willing to take the same route. Two decades ago, in their book Changing Fortunes, Paul Volcker and Toyo Gyohten underscored the glaring double standard of crisis resolution: “When the [International Monetary] Fund consults with a poor and weak country, the country gets in line. When it consults with a strong country, the Fund gets in line.”

Perhaps that is the key lesson from the Asian crisis of the late 1990’s: austerity can work.  But its success or failure ultimately boils down to power politics – namely, a resolution of the tension between short-term palliatives and the commitment to a long-term strategy.  That’s where the battle still rages in the West.