Rich Nations, Poor People: The Cause For Rising Poverty In The Western World 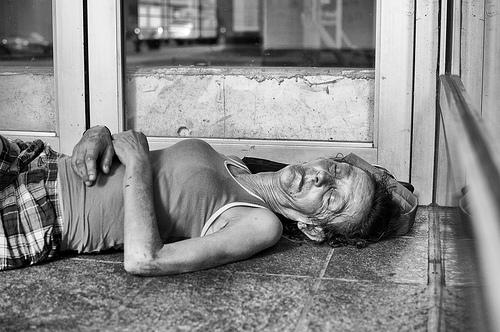 Poverty rates are on the rise in the Western world, as recession, rising fuel costs and austerity cuts to social welfare benefits, take their toll on the most vulnerable people. But rather than trying to alleviate the problem, most continue to perpetuate the cycle even further.

The European Anti-Poverty Network (EAPN) has warned that the austerity packages introduced by European governments desperate to reduce their deficits are responsible for rising levels of poverty and social exclusion.

The EAPN, a representative network of European NGOs fighting poverty, points to Eurostat data showing steep rises in poverty. The biggest hikes have been in Spain, where the poverty rate rose to 21.8 percent this year from 19.7 percent in 2007. There is also a greater risk of severe material deprivation in Eastern European countries such as Latvia and Lithuania, and a higher risk of child poverty and social exclusion in most EU states. Poverty rates range from 10 percent in the Czech Republic and the Netherlands, to more than 20 percent in Bulgaria and Romania.

Rising fuel prices add to the pressures. The UK’s Office of National Statistics said petrol prices have risen by 52 percent since 2001, putting petrol out of reach for many people. Last year, 77 percent of the top fifth of British households bought fuel compared to 47 percent of the bottom fifth. The ONS report also said the poorest households spend three times as much of their income on petrol as the richest, meaning they are hit proportionally harder.

The biggest cause of rising poverty, however, remains cuts in welfare spending as a result of austerity packages, which are biting in all the major European economies. Fintan Farrell, the director of EAPN, said austerity measures were driving more and more EU citizens into precarious financial situations.

“Cutting benefits is the wrong approach to economic recovery. Welfare systems are strong economic stabilisers as they maintain confidence and consumer spending, as well as meeting basic needs,” he said. “Instead of being seen as an investment which pays off in the long run, like good healthcare or education, they are seen as a cost burden.”

Farrell said poverty in Europe was closely correlated with rising inequality. According to OECD data, the average income of the richest 10 percent in the EU is nine times that of the poorest 10 percent, though this ratio is much lower in Nordic countries and in some continental European countries. Using the Gini coefficient, a measure of income inequality that ranges from zero (when everybody has identical incomes) to 1 (when all income goes to one person), the equality level in OECD countries was 0.28 on average in the mid-1980s, but by the late 2000s, it had increased by 10 percent, to 0.31. Income inequality rose in 17 out of the 22 OECD countries for which data are available. In Finland, Germany, Israel, New Zealand, Sweden and the US, it increased by more than 4 percent.

“More equal societies do better on measures of poverty,” said Farrell. “We often perceive welfare systems as safety nets of last resort rather than systems helping to keep things in balance, but they are not just for the poor. Growing inequalities are undermining welfare states. The most resilient ones in the crisis are the Nordic countries. And the systems in Belgium and France have helped to mitigate its effects.”

Farrell’s view of the dangers of austerity measures echoes the analysis of economist Joseph Stiglitz in a recent article on Economy Watch:

“As Greece and others face crises, the medicine du jour is simply timeworn austerity packages and privatization, which will merely leave the countries that embrace them poorer and more vulnerable... The financial markets and right-wing economists believe that austerity produces confidence, and that confidence will produce growth. But austerity undermines growth, worsening the government’s fiscal position... confidence is undermined, and a downward spiral is set in motion.”

The severity of the experience of poverty in the Western world is often underestimated because it is perceived that there are adequate safety nets, but the system does not always function as it should. According to the traditional European definition of poverty, which is having less than 60 percent of median equivalised income, there are 82 million poor people in Europe.

According to the European Parliament’s Employment and Social Affairs Committee, 20 percent of the EU’s population lives in poverty, including 20 million children. In addition, 43 million people in the EU are at risk of “food poverty”, which the World Health Organization defines as not being able to afford one meal containing meat or fish every second day.