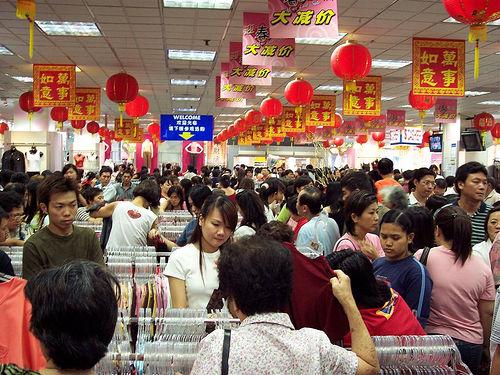 At this particular time, one of the fabulous things for a Westerner living in Asia, or, indeed, anywhere outside the “developed” world,

is the opportunity to see concretely the rise of what is often called “the new global middle class.”

To a very real extent, this is an entirely new phenomenon in the history of the modern world,

and we at EconomyWatch are delighted to be able to help people from everywhere understand the salient elements of this process,

both in and of itself AND how it relates to the so-called “developed” market economies.

The dynamics of this phenomenon are obviously different from country to country / region to region / continent to continent.

But there is no question that the economic growth going on OUTSIDE the US / EU / and Japan,

which in this case is definitely part of the West,

is extremely exciting from both a human and economic point of view.

Obviously, at Economy Watch, we necessarily focus on the economic aspect

of what the great anthropologist Karl Polyani called “the great transformation,”

although we hope our readers will find here an underlying concern for the human aspects of this revolutionary change.

is being carried out by multi-national corporations, as well as, of course, local companies.

are approaching the attempt to “capture” this emerging global middle class as early as possible,

given the somewhat surprising fact that in 17 product categories in the United States, for example,

the market leader in 1925 remained the number-one or number-two player for the rest of the century.

These companies include Kraft Foods (Nabisco), which led in biscuits; Del Monte Foods, in canned fruit; and Wrigley, in chewing gum.

in more than a dozen emerging nations, not just the fast-growing BRIC countries, as we have pointed out,

and include almost two billion people, spending a total of $6.9 trillion annually.

about twice the current consumption in the United States –

and who knows how long THAT figure is going to be so high ;-) .

These new spenders offer an opportunity for early winners to gain lasting advantages,

just as companies in Europe and the United States did at similar points in their development.

Despite having strong global brands, multinational companies face challenging competition in these markets,

as these economies already boast aggressive local players that have captured a significant portion of spending.

Chinese beverage maker Hangzhou Wahaha, for example, has built a $5.2 billion business against global competitors such as Coca-Cola and PepsiCo

Further complicating matters is the fact that the multinationals’ business models

are usually based on practices established in the markets of the developed world,

where the game is won slowly, by finding cost savings

Among emerging markets, perhaps only China can provide enough short-term growth to justify that strategy.

Meeting the needs of most consumers in emerging markets requires a different course,

which often elicits anguished cries in the corridors of the multinationals:

“You want me to change my business model and go across the world for $50 million in revenue?”

but also are wary of the battles already under way among emerging-market champions.

While there are multiple approaches to capturing emerging-market consumers,

the two critical factors are SPEED and SCALE.

One way multinationals can quickly gain the scale they need is to identify clusters of similar consumers across multiple markets.

Another tack is to work at a more local level, gaining scale in specific regions and categories

by teaming up with deeply knowledgeable on-the-ground partners.

All of this is easier said than done, of course, because middle-class consumers in these markets are extremely diverse.

In some ways, they resemble those in developed nations:

they are aware of and have a fondness for brands

and want access to a variety of products at different prices,

including products they aspire to but can’t currently afford.

Yet their tastes are often localized, and while they are middle-class in regional terms,

they are still not wealthy enough to replace products regularly, because their percentage of truly discretionary income is lower:

in China and India, for example, about 40 percent of average household income is spent on food and transportation,

compared with 25 percent in the United States,

although that could be changing depending on whether the de-flation or stag-flation scenario ends up dominating.

The best way to make sense of this picture is to take a granular view using product categories.

For individual categories, multinationals should FIRST identify whether consumer needs in emerging markets are fundamentally global or local.

A good proxy for this issue is the similarity of product offerings across geographies.

SECOND, multinationals can assess the consumer’s ability to afford a given product.

as well as the willingness of consumers to “stretch” to buy less-affordable products.

and combining that with a clear view on the affordability and accessibility of a given product,

multinationals can go a long way toward determining the strategies and business models that will allow them to gain scale quickly.

Broadly speaking, there are FOUR categories of different goods and services,

each one of which requires a different strategy

if a company is going to successfully reach the consumer needs and taste of the “new emerging global middle class.”

The FIRST category comprises products and services for which consumer needs

are quite similar across geographies and affordability is not a constraint.

There is little need to create marketing plans to roll out such products in different countries, one after another:

it seems most efficient to identify similar consumer segments across countries

and to build scalable business models for each cluster.

Examples of products in this category include personal banking, mobile communications, consumer electronics, and pharmaceuticals,

which have similar industry structures, rates of consumer adoption, and socioreligious factors across geographies.

These segments included one of conservative users very loyal to their local banks – India, Indonesia, the Philippines, and Taiwan –

and another of remote-channel users who were highly price sensitive: Hong Kong, Singapore, and South Korea.

The bank successfully designed and implemented a specific product and channel strategy for each of these five segments across countries.

that are widely available or even mass market in the developed world.

For the vast majority of the emerging middle class, however,

these products and services are neither affordable nor accessible—they are premium items.

While most forecasts predict less than 3 percent of total emerging-market households will be in this category in 2025,

has historically made this category appealing to multinationals.

Capturing the loyalty of these consumers and, as they develop new needs, upgrading them is the key.

Since emerging-market consumers want value—even in this category—

than are their counterparts in the developed world.

The company launched a premium offering that

but also guarantees maintenance visits within 6 hours, compared with the normal 24-hour commitment.

such as low-cost snacks and highly localized baby-care hygiene products.

In this category, there’s clear merit in evaluating how companies can scale up across markets, even if needs are local.

and allows companies to enjoy greater economies of scale and lower delivery costs.

In India, for example, PepsiCo successfully shaped the snack market by creating a new platform, called Kurkure, for younger consumers.

The product feels entirely local, though it is packaged and distributed by Frito-Lay.

Other strategies for penetrating this affordable, accessible, and local market are to use celebrity endorsements and to leverage local knowledge,

either selectively, in areas such as distribution, or through more comprehensive alliances.

The partnership between Norwegian telecommunications company Telenor and Bangladesh’s Grameen Telecom, for example,

resulted in the creation, in 1997, of Grameen Phone, now the country’s largest mobile operator.

The FINAL category represents products and services for which needs are, and will probably remain, very local, making affordability a challenge.

In this segment, the potential available market share is high, though the market looks small,

that satisfy similar needs rather than buy a higher-priced global product.

The first step for multinationals is to define the market by measuring current total consumption,

and studying potential spending likely to be unlocked once incomes grow.

Companies then need to make their products more affordable and accessible,

looking at everything from capital expenditures to product features to distribution.

in that “last mile” before reaching consumers.

Beer manufacturer SABMiller, for example, one of the companies we discussed in our recent feature on South Africa,

without changing its business model.

It retooled its factories for cheaper, locally sourced ingredients,

such as cassava and sugar rather than barley and maize,

and used local distributors to ensure the availability of its products.

Traditional approaches in which companies enter markets one by one

and focus on a handful of brand and market combinations

will not meet the challenges of the developing world’s large and growing body of middle-class consumers.

and more willing to work with others to gain scale quickly.

In some regions, such as Africa, multinationals may even need to work with the public and social sector

to ensure that consumers have adequate income to generate demand.

Because multinationals may have to adopt different business models by market, category, and brand,

they need flexible and responsive organizations.

Cisco, for example, has created a second world headquarters, in India, to spearhead its push into the country,

while other companies are establishing centers of excellence to identify, recruit, and develop staff that can be deployed locally.

Using local vendors is critical to running a lean operation:

many multinationals have found, for example, that capital outlays in emerging markets

if they use local resources for plant and process engineering and to execute projects.

Finally, companies need to be aware of perhaps the biggest bottleneck

there simply won’t be enough staff, according to this fascinating study by McKinsey.

Building talent academies inside companies to accelerate leadership development is a good step.

Yet the rapid growth in many emerging markets may make traditional “grow your own” or “hire from within” approaches manifestly inadequate to meet staffing needs.

By addressing these structural and operational imperatives

and identifying the best approaches to achieve the scale needed to serve the growing middle class,

multinationals can meet their high expectations for international growth.

And, we hope, become a vital and positive component of the process

of making life better for the “new global middle class.”