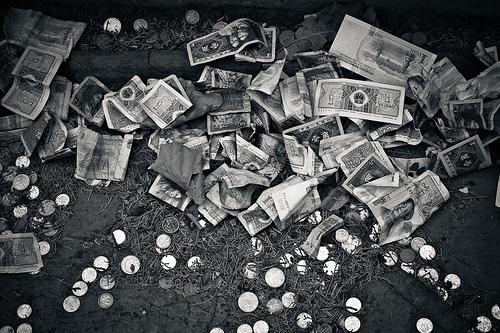 China is already the world’s second largest economy but its currency, the renminbi, is barely traded internationally. Unlike reserve currencies such as the US dollar, and despite China's emerging position as a global economic powerhouse, the Chinese currency is hardly used in international trade and scarcely held by foreigners. This is gradually changing but the City of London is probably being optimistic if it thinks it can grab a significant portion of that trade.

Since 2009, China has introduced a series of policy measures designed to liberalize its currency and ensure that it is more widely used for trade settlement. As Anthony Harrington and I highlighted in a blog earlier this year, China has signed a currency agreement with Japan, which will enable Chinese and Japanese trading companies to switch between yuan and yen without having to convert to US dollars first. Bloomberg View said the deal would trigger an appreciation of the Yuan/renminbi, hasten the rebalancing of the Chinese economy, and nudge the yuan/renminbi towards its “inevitable” status as a global reserve currency.

As the process of Chinese currency liberalization gains traction, several financial centres are jockeying for position with a view to becoming the leading offshore renminbi (RMB) trading center. London is optimistic that, given its successful track record with the Eurodollar market in the 1970s and its continuing dominance as a European financial center, it has a strong chance of emerging triumphant. The government of David Cameron has been aggressively courting the Chinese authorities, with private sector banks like HSBC falling in behind.

On April 18, 2012, the chancellor George Osborne declared the UK government was determined to see the City of London become one of the leading centres for renminbi trading. In a speech, on the same day that HSBC said it planned to launch a three-year renminbi bond in London, Osborne told a City audience:

"It is the ambition of the British government to make London a western hub for the sector - with all the benefits that this will bring to our own economy ... I hope that other ... banks and corporates will follow today’s lead, and that we will see Chinese institutions and corporations issuing RMB bonds in the London market in the very near future.”

“In the coming decades, it is China that will act as one of the great powerhouses of the world economy. By acting as a bridge between East and West, we can secure London’s position as the leading financial centre in the years to come – securing growth and prosperity for Britain."

However the London-based think tank Chatham House, has now rained on Osborne’s parade. In a paper issued this month the thinktank predicts London will remain a 'complementary' rather than 'central' player in the offshore renminbi market.

In The Connecting Dots of China’s Renmimbi Strategy: London and Hong Kong , researchers Paola Subacchi and Helena Huang warned that the expansion of the offshore RMB market is going to be wrapped up in the politics in Beijing around capital-account liberalization. They said this means the UK will almost certainly end up playing second fiddle to its former colony Hong Kong.

Capital liberalization is a critical decision for the Chinese authorities and it is unlikely that the current pace of gradual opening will be accelerated. Thus, while Hong Kong will continue to expand the renmimbi business thanks to its proximity with the Mainland and the cross-border trade, it will be more difficult for London to achieve the same pace. London is therefore likely to develop, at least for the time being, as an renmimbi offshore hub, intermediating funds from the offshore centre, Hong Kong.

Subacchi and Huang explored the policy measures introduced by Beijing since 2009 to facilitate the expansion of an offshore renminbi market. They pointed out that, as China seeks to overcome the constraints of its currency's limited convertibility, there are going to be significant implications for the international monetary system and for economies across the world.

Related: How Regulatory Initiatives Are Driving the Growth of Dim Sum Bonds

Related: Currency Wars: Will the dollar, euro, yen or yuan prevail in 2012?

Related: The Almighty Dollar – Are We Entering A Post-USD World? : Sanjeev Sanyal

Examining the chances of a range of international financial centres, Subacchi and Huang drew a distinction between ‘offshore centres’ and ‘offshore hubs’. They argued that, limited by technical difficulties and policy barriers, offshore hubs such as London will only be able to link into to the onshore market in the People's Republic via the offshore centre of Hong Kong. They said the extent to which London and other hubs develop will be dictated by strategic decisions made in Beijing, and on the liquidity made available through and by Hong Kong. Thus London's role will be that of a 'connecting dot' in China's strategy. Given the features of the offshore renminbi market at present, they made clear Hong Kong holds all the aces.

The authors also asked whether London's financial sector, which has been developed on the back of private initiative and market preferences, might be at odds with China's policy-led renminbi strategy. They did not mention was whether the scandal-ridden nature of UK banking and finance, with Libor and other scandals erupting over the summer, might limit London’s chances.

Subacchi and Huang noted that there are some big differences between the renminbi market and the Eurodollar market. They said that unlike the Eurodollar market, which was led by a group of London-based banks with little involvement from the monetary authorities, the development of the renmimbi offshore market is going to be a policy-led initiative. Given that the former British colony has been involved in the same decision-making process that is driving China’s RMB strategy, they said Hong Kong has a clear upper hand.

Neo-classical economics led us into a cul-de-sac. Now we must find a way out is republished with permission from the QFinance Blog. Get the QFinance Dictionary of Business and Finance iOS app for a comprehensive guide to financial terms and expressions.