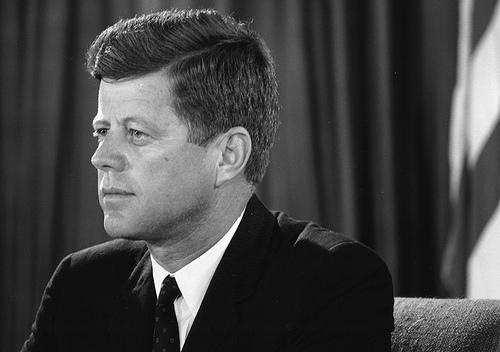 Many consider hatred and conflict inevitable, owing to a fundamental clash of values and interests. Fifty years ago, U.S. President J.F. Kennedy showed that peace could be achieved even in the most difficult circumstances. His courage, vision, eloquence, and political skills are an affirmation that the path to peace must always be preferred to the dead end of war.

NEW YORK – Fifty years ago, President John F. Kennedy did the seemingly impossible. At the height of the Cold War, he moved the two nuclear superpowers, the United States and the Soviet Union, toward peace. The lessons of Kennedy’s act of leadership – one of the greatest of modern times – are directly relevant today.

I recount this remarkable story in a new book, To Move the World. To many, war between the two superpowers seemed inevitable. The Cuban missile crisis in October 1962 created a global air of fear and pessimism, and certainly the belief that the US and the Soviet Union could not be reconciled.

Kennedy knew better. He understood that much of the dangerous tension stemmed from each side’s hardliners, who acted as if peace were impossible. Their actions on one side would provoke the other side’s hardline response, fueling an upward spiral of distrust that strengthened the extremes in both camps.

The “experts” of that era spoke of the balance of nuclear power. They believed that neither side would use nuclear weapons, owing to the fear of retaliation. But Kennedy recognized something far more dangerous: Accidents, misjudgments, bluffs, provocation by hardliners, or tactical mistakes could easily throw either side into panic. In the Cuban missile crisis, the US and the Soviet Union stumbled to the precipice of nuclear war, not because of any desire for one (except among a few hothead extremists), but because of a series of miscalculations and pressure exerted by hardliners.

Related: Russia Calls on Iran and World Powers to Stop Bickering “Like Children”

Following the crisis, Kennedy was determined to pull back from the precipice for good. In his extraordinary “Peace Speech” of June 10, 1963, he suggested to Americans that there was a way to make peace with the Soviet Union. Rather than issuing a list of demands, Kennedy did something far more interesting and unusual: he called upon Americans to reconsider their own attitudes about war and peace.

“First: Let us examine our attitude toward peace itself,” Kennedy said. “Too many of us think it is impossible. Too many think it unreal. But that is a dangerous, defeatist belief. It leads to the conclusion that war is inevitable, that mankind is doomed, that we are gripped by forces we cannot control. We need not accept that view. Our problems are manmade; therefore, they can be solved by man.”

We are both caught up in a vicious and dangerous cycle in which suspicion on one side breeds suspicion on the other, and new weapons beget counter-weapons.

And his assessment of its solvability was equally concise: “[B]oth the United States and its allies, and the Soviet Union and its allies, have a mutually deep interest in a just and genuine peace and in halting the arms race.”

Kennedy’s speech provoked a highly positive response from his Soviet counterpart, Nikita Khrushchev, who called in the US envoy and told him that the speech was the finest by any American president since Franklin Roosevelt. Within a few weeks, both sides had agreed to the Partial Nuclear Test Ban Treaty. Five years later, the first treaty led to a second, and even more important, agreement: the Nuclear Non-Proliferation Treaty.

Kennedy had proved a powerful truth. “[H]istory teaches us that enmities between nations, as between individuals, do not last forever,” he said. “However fixed our likes and dislikes may seem, the tide of time and events will often bring surprising changes in the relations between nations and neighbors.

That lesson applies powerfully today. The US is again caught in a spiral of distrust and uncertainty with other countries (and the same is true of countless conflicts around the world that do not involve the US). America’s conflict with Iran is one such powerful case; others include its conflicts with Cuba and North Korea, and also the Israeli-Palestinian conflict, in which the US is deeply engaged as a supporter of Israel.

Related: Israel Cuts Off $118 Million In Tax Funds To Palestine After UN Vote

In all of these cases, many people consider hatred and conflict inevitable, owing to a fundamental clash of values and interests. But this is rarely the case. Even though the US and Iran are in a spiral of distrust, for example, there could be grounds for reestablishing a far healthier bilateral relationship.

To be sure, the two sides are now dangerously divided. Their conflict has spilled over into Syria, where the US is now planning to arm the rebellion against President Bashar al-Assad in no small part because his regime is aligned with Iran. Syria’s civil war is therefore increasingly a proxy fight between Iran and the US (and other anti-Iranian countries), with Syrians dying in massive numbers as victims of somebody else’s conflict.

Now that the Iranian people have elected a new president, Hassan Rowhani, the opportunity for a new peace overture is at hand. Yes, there are important matters to discuss, notably Iran’s nuclear ambitions; but several countries in Iran’s neighborhood already possess nuclear weapons, threatening the entire region.

US President Barack Obama should take the next steps, both with Iran and with other countries (including North Korea and Cuba). A decade of US secret and not-so-secret wars, drone attacks, and covert operations is enough. We now urgently need US leadership that envisions peace rather than war as the solution.

Fifty years ago, Kennedy showed that peace could be achieved even in the most difficult circumstances. His courage, vision, eloquence, and political skills provide a model and inspiration for the US and other countries today. Then, as now, the path to peace must always be preferred to the dead end of war.