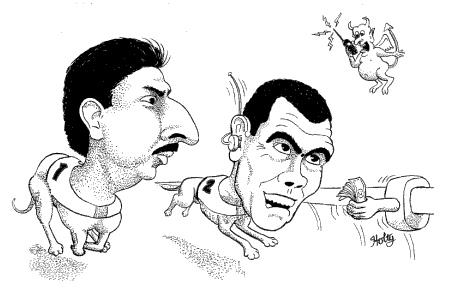 Illegal sports’ gambling exists all over the world. Even in the US, most sports gambling is still controlled by the mafia. It is a multi-billion pound industry and the profits for organised crime are comparable with the drug trade.

The world capital of illegal gambling, however, is undoubtedly Asia, where it is several times as large as the European and US gambling markets. Though accurate figures are hard to obtain, the US journal Foreign Policy estimated in 2006, that the total size of the Asian gambling market was worth $450 billion.

Oxford University’s Dr Declan Hill, the author of ‘The Fix: Soccer and Organized Crime’ compares the gambling culture in Asia to prohibition-era America, where a huge illegal industry grew up to provide something US citizens desired which was banned.

Substitute gambling for alcohol and the pattern in Asia is the same. Large numbers of Asians want to gamble, but their Government will not let them, and a whole illegal industry has set up to provide a taboo product. The heads of the gangs are some of the richest men in Asia, who are supported by a huge network of bookies and agents.

The power of the Asian gangs is such that their tentacles reach out all over the world. Dr Hill, who received his doctorate from the University of Oxford for research into match-fixing in football, risked his life to expose the scale of involvement by Asian match-fixing gangs at every international football tournament.

“I exposed three great scandals in my book ‘The Fix’,” he said. “The first is the existence of marriages between local criminals and Asian match-fixers to fix European games. The second is that match-fixing gangs have been at the under-17 World Cup, the under-20 World Cup, the Women’s World Cup, the Olympic Soccer Tournament and the World Cup itself, for at least the last 20 years. They have approached many, many different players and referees to fix matches,” he said.

Dr Hill gathered evidence for his thesis by infiltrating an Asian gang who was at the World Cup in Germany in 2006. “I did this at great personal risk. I then went to different players, referees and officials and corroborated what I saw. The evidence is deep and convincing,” he said.

There is a third aspect to the football betting scandal, which is that many high-level football officials know what is going on, but choose to look the other way.

“There were a few soccer officials who were the exception, such as Michel Platini,” said Dr Hill. “I sent him a copy of the book with a letter saying, ‘This is a controversial book, but it is not sensational. It is based on solid evidence and also my doctoral work at the University of Oxford. If there is anything I can do to help clean up the game, let me know’.”

Two weeks after receiving the book, Platini’s UEFA had established an integrity unit to protect football. “This was exactly, what I called for in the book and my media interviews. Three weeks after that, I was flown to UEFA headquarters at Nyon, in Switzerland, to meet with senior officials to give advice on how to set up these units.”

The gangs’ influence on the football, and other sporting leagues in their Asian homelands is also enormous. Chinese President Hu Jintao described the Chinese soccer league as a “national disgrace”. Other soccer leagues in Vietnam, Hong Kong, Indonesia, Cambodia, Hong Kong, Laos, Thailand, Malaysia and Singapore have had similar levels of scandal. The Taiwanese Baseball League has lost five of its original nine sides in the past few years to match-fixing scandals. Japanese Sumo wrestling is also notoriously corrupt.

“In some Asian sports leagues, it is as common for a fan to watch a fixed match as a normally played one,” said Dr Hill.