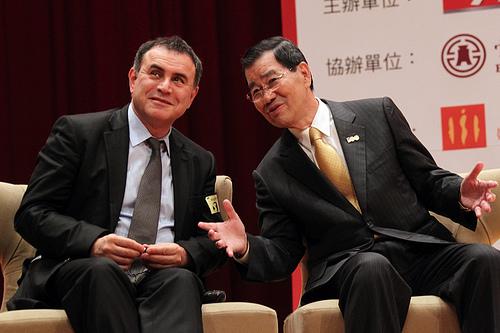 In his latest article – The Eurozone Heads For Break Up – published in the Financial Times, Roubini expresses his belief that current policies adopted by European nations has not and will not resolve the Eurozone’s fundamental problems of competitive and economic divergence. The Eurozone, in its present form, is thus on a path to separation.

The muddle-through approach to the eurozone crisis has failed to resolve the fundamental problems of economic and competitiveness divergence within the union. If this continues the euro will move towards disorderly debt workouts, and eventually a break-up of the monetary union itself, as some of the weaker members crash out.

The Economic and Monetary Union never fully satisfied the conditions for an optimal currency area. Instead its leaders hoped that their lack of monetary, fiscal and exchange rate policies would in turn see an acceleration of structural reforms. These, it was hoped, would see productivity and growth rates converge.

The reality turned out to be different. Paradoxically the halo effect of early interest rate convergence allowed a greater divergence in fiscal policies. A reckless lack of discipline in countries such as Greece and Portugal was matched only by the build-up of asset bubbles in others like Spain and Ireland. Structural reforms were delayed, while wage growth relative to productivity growth diverged. The result was a loss of competitiveness on the periphery.

All successful monetary unions have eventually been associated with a political and fiscal union. But European moves toward political union have stalled, while moves towards fiscal union would require significant federal central revenues, and also the widespread issuance of euro bonds — where the taxes of German (and other core) taxpayers are not backstopping only their country’s debt but also the debt of the members of the periphery. Core taxpayers are unlikely to accept this.

Eurozone debt reduction or “reprofiling” will help to resolve the issue of excessive debt in some insolvent economies. But it will do nothing to restore economic convergence, which requires the restoration of competitiveness convergence. Without this the periphery will simply stagnate.

Here the options are limited. The euro could fall sharply in value towards – say – parity with the US dollar, to restore competitiveness to the periphery; but a sharp fall of the euro is unlikely given the trade strength of Germany and the hawkish policies of the European Central Bank.

The German route — reforms to increase productivity growth and keep a lid on wage growth — will not work either. In the short run such reforms actually tend to reduce growth and it took more than a decade for Germany to restore its competitiveness, a horizon that is way too long for periphery economies that need growth soon.

Related: Josef Ackermann: The Most Dangerous Banker in the World

Deflation is a third option, but this is also associated with persistent recession. Argentina tried this route, but after three years of an ever deepening slump it gave up, and decided to default and exit its currency board peg. Even if deflation was achieved, the balance sheet effect would increase the real burden of private and public debts. All the talk by the ECB and the European Union of an internal depreciation is thus faulty, while the necessary fiscal austerity still has – in the short run – a negative effect on growth.

So given these three options are unlikely, there is really only one other way to restore competitiveness and growth on the periphery: leave the euro, go back to national currencies and achieve a massive nominal and real depreciation. After all, in all those emerging market financial crises that restored growth a move to flexible exchange rates was necessary and unavoidable on top of official liquidity, austerity and reform and, in some cases, debt restructuring and reduction.

Of course today the idea of leaving the euro is treated as inconceivable, even in Athens and Lisbon. Exit would impose big trade losses on the rest of the eurozone, via major real depreciation and capital losses on the creditor core, in much the same way as Argentina’s “pesification” of its dollar debt did during its last crisis.

Yet scenarios that are treated as inconceivable today may not be so far-fetched five years from now, especially if some of the periphery economies stagnate. The eurozone was glued together by the convergence of low real interest rates sustaining growth, the hope that reforms could maintain convergence; and the prospect of eventual fiscal and political union. But now convergence is gone, reform is stalled, while fiscal and political union is a distant dream.

Debt restructuring will happen. The question is when (sooner or later) and how (orderly or disorderly). But even debt reduction will not be sufficient to restore competitiveness and growth. Yet if this cannot be achieved, the option of exiting the monetary union will become dominant: the benefits of staying in will be lower than the benefits of exiting, however bumpy or disorderly that exit may end up being.

Nouriel Roubini is chairman of Roubini Global Economics, professor of Economics at the Stern School of Business NYU and co-author of ‘Crisis Economics’ that has been recently published in its paperback edition. This year, he was voted the most influential economist in the world.

Article from The Financial Times