Europe’s Woes Stem From A Crisis Of Nationalism: George Friedman 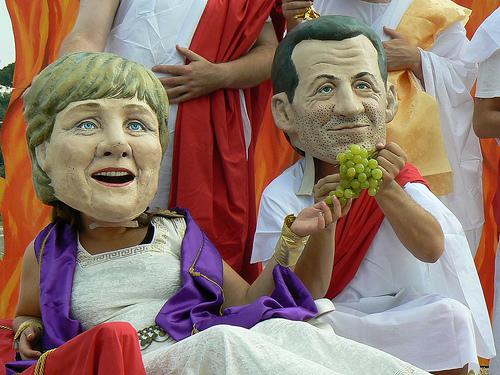 The European Union was formed by high-minded elites who believed that closer economic integration and interdependence between nations would result in fewer military conflicts that stemmed from nationalism.  However, the financial crisis that has engulfed the continent has since revealed the fault lines to the EU’s system – one that replaces military conflicts with economic ones. As such the ongoing crisis in Europe should not be seen as a crisis about the euro, or even a crisis about economics. Rather, it is actually a crisis about nationalism.

Change in the international system comes in large and small doses, but fundamental patterns generally stay consistent. From 1500 to 1991, for example, European global hegemony constituted the world’s operating principle. Within this overarching framework, however, the international system regularly reshuffles the deck in demoting and promoting powers, fragmenting some and empowering others, and so on. Sometimes this happens because of war, and sometimes because of economic and political forces. While the basic structure of the world stays intact, the precise way it works changes.

The fundamental patterns of European domination held for 500 years. That epoch of history ended in 1991, when the Soviet Union — the last of the great European empires — collapsed with global consequences. In China, Tiananmen Square defined China for a generation. China would continue its process of economic development, but the Chinese Communist Party would remain the dominant force. Japan experienced an economic crisis that ended its period of rapid growth and made the world’s second-largest economy far less dynamic than before. And in 1993, the Maastricht Treaty came into force, creating the contemporary European Union and holding open the possibility of a so-called United States of Europe that could counterbalance the United States of America.

All these developments happened in the unstable period after the European Age and before … well, something else. What specifically, we’re not quite sure. For the past 20 years, the world has been reshaping itself. Since 1991, then, the countries of the world have been feeling out the edges of the new system. The past two decades have been an interregnum of sorts, a period of evolution from the rule of the old to the rule of the new.

Four things had to happen before the new era could truly begin. First, the Americans had to learn the difference between extreme power (which they had and still have) and omnipotence (which they do not have). The wars in the Islamic world have more than amply driven this distinction home. Second, Russian power needed to rebound from its post-Soviet low to something more representative of Russia’s strength. That occurred in August 2008 with the Russo-Georgian war, which re-established Moscow as the core of the broader region. Third, China — which has linked its economic, political and military future to a global system it does not control — had to face a readjustment. This has yet to happen, but likely will be triggered by the fourth event: Europe’s institutions — which were created to function under the rules of the previous epoch — must be rationalized with a world in which the Americans no longer are suppressing European nationalism.

With the benefit of hindsight, we know that the 2008 financial crisis initiated the last two events. The first result of the financial crisis was the deep penetration of the state into those financial markets not already under state influence or control. The bailouts, particularly in the United States, created a situation in which decisions by political leaders and central banks had markedly more significance to the financial status of the country than the operation of the market. This was not unprecedented in the United States; the municipal bond crisis of the 1970s, the Third World debt crisis and the savings and loan crisis had similar consequences. The financial crisis, and the resultant economic crisis, hurt the United States, but its regime remained intact even while uneasiness about the elite grew.

But the financial crisis had its greatest impact in Europe, where it is triggering a generational shift. Since 1991, the idea of an integrated Europe has been a driving force of the global economy. As mentioned, it also has been presented as an implicit alternative to the United States as the global centre of gravity.

Collectively, Europe’s economy was slightly larger than the U.S. economy. If mobilized, that inherent power made Europe a match for the United States. In the foreign policy arena, the Europeans prided themselves on a different approach to international affairs than the Americans used. This was based on a concept known as “soft power” — which relied on political and economic, as opposed to military, tools — an analog to the manner in which it saw itself managing the European Union. And Europe was a major consumer of goods, particularly Chinese goods. (It imported more of the latter than the United States did.) Taken together, Europe’s strengths and successes would allow it to redefine the international system — and the assumption for the past generation was that it was successful.

In the context of the ongoing European financial crisis, the issue is not simply whether the euro survives or whether Brussels regulators oversee aspects of the Italian economy. The fundamental issue is whether the core concepts of the European Union remain intact.

It is obvious that the European Union that existed in 2007 is not the one that exists today. Its formal structure appears the same, but it does not function the same. The issues confronting it are radically different. Moreover, relations among the EU nations have a completely different dynamic. The question of what the European Union might become has been replaced by the question of whether it can survive. Some think of this as a temporary aberration. We see it as a permanent change in Europe, one with global consequences.

The European Union emerged with the goal of creating a system of interdependency in which war in Europe was impossible. Given European history, this was an extraordinarily ambitious project, as war and Europe have gone hand in hand. The idea was that with Germany intimately linked to France, the possibility of significant European conflict could be managed. Underpinning this idea was the concept that the problem of Europe was the problem of nationalism. Unless Europe’s nationalisms were tamed, war would break out. The Yugoslav wars after the collapse of Communism comprised the sum of Europe’s fears. But there could be no question of simply abolishing nationalism in Europe.

National identity was as deeply embedded in Europe as elsewhere, and historical differences were compounded by historical resentments, particularly those aimed toward Germany. The real solution to European wars was the creation of a European nation, but that was simply impossible. The European Union tried to solve the problem by retaining both national identity and national regimes. Simultaneously, a broader European identity was conceived based on a set of principles, and above all, on the idea of a single European economy binding together disparate nations. The reasoning was that if the European Union provided the foundation for European prosperity, then the continued existence of nations in Europe would not challenge the European Union. Perhaps, over time, this would see a decline of particular nationalisms in favour of a European identity. This assumed that prosperity would cause national identity and tensions to subside. If that were true, then it would work. But there is more to Europe politically speaking than an enhanced trading area, and the economics of Europe are hardly homogeneous.