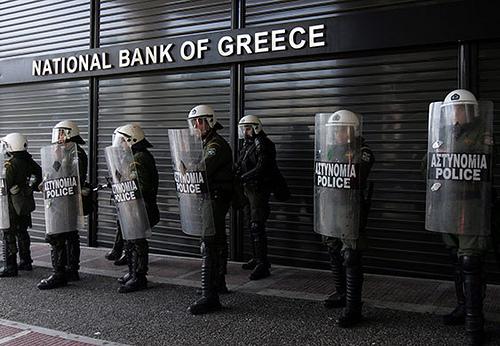 Since the eurozone debt crisis crisis erupted in Greece almost two years ago, EU leaders have failed to propose a solution that balances austerity and economic growth, without which confidence in the euro cannot be restored. Perhaps European policymakers should look to Argentina for the answer.

NEW YORK – Europe’s sovereign-debt crisis has rumbled on for so long that some people are beginning to take it for granted that eurozone leaders can continue to stumble from one non-solution to the next without risk of cataclysm. But if any troubled southern European economy fails to roll over its debt in the coming months, the resulting contagion will spread quickly from the eurozone throughout the global financial system, with consequences far more grave than what followed Lehman Brothers’ collapse in September 2008.

Despite the new agreement reached at the European Union’s summit in December, strengthening financial markets’ confidence in the eurozone remains an elusive goal. In the aftermath of the summit, the euro’s exchange rate sank to its lowest level of the year (around $1.30), while yields on Italian five-year bonds hit a new high (almost 6.5 percent). In France, Socialist presidential candidate François Hollande flatly declared that the latest agreement “is not the right answer,” because “without economic growth we will achieve none of the targets on deficit reduction.”

Hollande was right. Since the crisis erupted in Greece almost two years ago, EU leaders have failed to propose a solution that balances austerity with economic growth. Whenever the markets signal skepticism about the euro’s viability, European leaders rush to restore confidence through austerity measures, while ignoring the underlying need to re-establish the conditions for growth. The urgent crowds out the merely important. But, without growth, the EU’s long-term prospects are grim.

Since the crisis began, the need for economic growth in Europe’s debt-distressed countries has been portrayed as their problem. For creditors, especially German lenders, the main priority has been to impose austerity and discipline on the eurozone’s profligate south. Because German banks hold much of the debt owed by peripheral banks and governments, officials have focused on this financial link between Germany’s economy and those of troubled eurozone members. But German Chancellor Angela Merkel’s understandable desire to discipline the spendthrifts entails sawing away at the last remaining branch on which Germany’s bankers and taxpayers are perched.

Merkel’s strategy ignores a second link between Germany and the eurozone’s highly indebted countries. A large share of German exports (as well as those of other healthy eurozone economies) go to eurozone markets – including those in the troubled south.

Until the crisis hit, Germany benefited immensely from the stable environment created by the eurozone. Peripheral eurozone countries ran large current-account deficits, which subsidized German growth. If these markets now contract – and austerity has thus far led to severe recessions in Greece and Ireland, with Portugal expected to follow next year – so will the German economy. The highly indebted southern countries are far from being the sole stakeholders in their own economic growth.

Any viable strategy to resolve the crisis must address both links between core and peripheral economies. This means finding the right policy mix between austerity and growth. Only a solution that balances the two will guarantee the long-term growth of both peripheral and core eurozone economies, reassuring debt markets of their solvency and stemming the contagion that threatens to sweep the continent. The agreement reached at the recent EU summit to institutionalize austerity needs to be supplemented by a growth policy.

This requires a two-pronged approach. First, highly indebted countries should be allowed to swap existing debt for new bonds issued at a heavy discount. The discount is essential for reducing sovereign debt in the periphery to manageable levels and lowering immediate debt payments, thereby freeing resources for the investment and consumption that make growth possible.

But if creditors must share in the downside of the current crisis, they should also share in the future economic growth of peripheral eurozone economies. This requires a second step: linking the new bonds to warrants tied to debtor countries’ GDP growth. Converting existing sovereign debt into new bonds attached to GDP warrants would work like a debt/equity swap in a corporate bankruptcy. It would guarantee that creditors share in the upside of the reforms that the eurozone must implement to guarantee its own viability.

There is a precedent for this. Following its debt default in 2002, Argentina successfully implemented a similar program. In exchange for a reduction of its existing debt, the Argentinean government issued new bonds linked to GDP warrants and committed 5 percent of future annual GDP growth above 3.3 percent to a pool shared among creditors.

These Argentinean GDP warrants soon became tradable separately from the bonds to which they were initially linked, allowing their holders to cash in. Once growth resumed in Argentina, its GDP warrants became some of the best investments in the developing world, generating a total return of more than 500 percent over the last five years.

Without economic growth, there will be no lasting solution to the eurozone crisis. For the troubled economies to revive, the recent agreements on austerity must be supplemented by significant debt haircuts. Such haircuts, however, are hard to sell to the German electorate. GDP warrants would be a good way to close the deal.

Jim Leitner is President of Falcon Management. Nuno Monteiro and Ian Shapiro are professors of political science at Yale.

See also: The Endgame For The Eurozone Has Begun: Nouriel RoubiniSee also: Europe’s Currency Conundrum – What Can Save The Euro Now? : Joseph Stiglitz