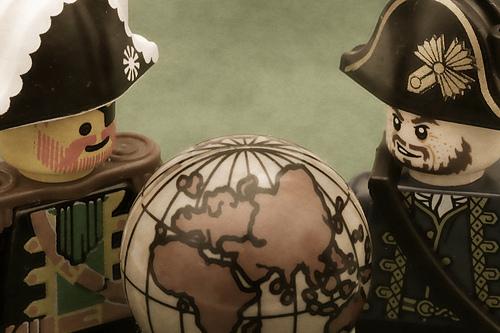 Despite the global economy’s myriad of problems, leaders at the World Economic Forum in Davos, particularly those from Europe, seemed more interested in celebrating the euro’s survival, rather than in tackling long-term concerns. Over the last 25 years, our world has moved from one dominated by two superpowers to being dominated by just one, and now to a leaderless, multi-polar world. While we may talk about the G-7, or G-8, or G-20, the more apt description is G-0.

DAVOS – The World Economic Forum’s annual meeting in Davos has lost some of its pre-crisis panache. After all, before the meltdown in 2008, the captains of finance and industry could trumpet the virtues of globalization, technology, and financial liberalization, which supposedly heralded a new era of relentless growth. The benefits would be shared by all, if only they would do “the right thing.”

Those days are gone. But Davos remains a good place to get a sense of the global zeitgeist.

It goes without saying that developing and emerging-market countries no longer look at the advanced countries as they once did. But a remark by one mining company executive from a developing country caught the spirit of change:

In response to one development expert’s heartfelt despair that unfair trade treaties and unfulfilled promises of aid have cost the developed countries their moral authority, he retorted: “The West never had any moral authority.” Colonialism, slavery, the splintering of Africa into small countries, and a long history of resource exploitation may be matters of the distant past to the perpetrators, but not so to those who suffered as a result.

If there is a single topic that concerned the assembled leaders the most, it is economic inequality. The shift in the debate from just a year ago seems dramatic: no one even mentions the notion of trickle-down economics anymore, and few are willing to argue that there is a close congruence between social contributions and private rewards.

While the realization that America is not the land of opportunity that it has long claimed to be is as disconcerting to others as it is to Americans, inequality of opportunity at the global scale is even greater. One cannot really claim that the world is “flat” when a typical African receives investment in his or her human capital of a few hundred dollars, while rich Americans get a gift from their parents and society in excess of a half-million dollars.

A high point of the meeting however was the speech by Christine Lagarde, the International Monetary Fund’s managing director, who stressed the marked change in her institution, at least at the top: deep concern about women’s rights; renewed emphasis on the link between inequality and instability; and recognition that collective bargaining and minimum wages could play an important role in reducing inequality. If only the IMF programs in Greece and elsewhere fully reflected these sentiments!

The “Productivity vs. Job Creation” Problem

The Associated Press organized a sobering session on technology and unemployment: Can countries (particularly in the developed world) create new jobs – especially good jobs – in the face of modern technology that has replaced workers with robots and other machines in any task that can be routinized?

Overall, the private sector in Europe and America has been unable to create many good jobs since the beginning of the current century. Even in China and other parts of the world with growing manufacturing sectors, productivity improvements – often related to job-killing automated processes – account for most of the growth in output. Those suffering the most are the young, whose life prospects will be badly hurt by the extended periods of unemployment that they face today.

But most of those in Davos put aside these problems to celebrate the euro’s survival. The dominant note was one of complacency – or even optimism. The “Draghi put” – the notion that the European Central Bank, with its deep pockets, would and could do whatever necessary to save the euro and each of the crisis countries – seemed to have worked, at least for a while. The temporary calm provided some support for those who claimed that what was required, above all, was a restoration of confidence. The hope was that Draghi’s promises would be a costless way of providing that confidence, because they would never have to be fulfilled.

Critics repeatedly pointed out that the fundamental contradictions had not been resolved, and that if the euro was to survive in the long run, there would have to be a fiscal and banking union, which would require more political unification than most Europeans are willing to accept. But much of what was said in and around the meetings reflected a deep lack of solidarity.

One very senior government official of a northern European country did not even put down his fork when interrupted by an earnest dinner companion who pointed out that many Spaniards now eat out of garbage cans. They should have reformed earlier, he replied, as he continued to eat his steak.

IMF growth forecasts released during the Davos meeting highlight the extent to which the world has become decoupled: GDP growth in the advanced industrial countries is expected to be 1.4 percent this year, while developing countries continue to grow at a robust 5.5 percent annual rate.

While Western leaders talked about a new emphasis on growth and employment, they offered no concrete policies backing these aspirations. In Europe, there was continued emphasis on austerity, with self-congratulations on the progress made so far, and a reaffirmation of resolve to continue along a course that has now plunged Europe as a whole into recession – and the United Kingdom into a triple-dip downturn.

Perhaps the most optimistic note came from the emerging markets: while the risk of globalization was that it implied a new interdependence, so that flawed economic policies in the US and Europe could torpedo developing countries’ economies, the more successful emerging markets have managed globalization well enough to sustain growth in the face of failures in the West.

With the US politically paralyzed by the Republicans’ infantile political tantrums, and Europe focused on ensuring the survival of the ill-conceived euro project, the lack of global leadership was a major complaint at Davos.

In the last 25 years, we have moved from a world dominated by two superpowers to one dominated by one, and now to a leaderless, multi-polar world. While we may talk about the G-7, or G-8, or G-20, the more apt description is G-0. We will have to learn how to live, and thrive, in this new world.

Joseph Eugene Stiglitz is a professor at Columbia University and the recipient of the Nobel Memorial Prize in Economic Sciences in 2001 and the John Bates Clark Medal in 1979. Stiglitz has authored numerous books including Freefall: America, Free Markets, and the Sinking of the World Economy(2010), Globalisation and its Discontents (2002) and Making Globalisation Work (2006). Learn more about Joseph E. Stiglitz and his work at EconomyWatch.com.