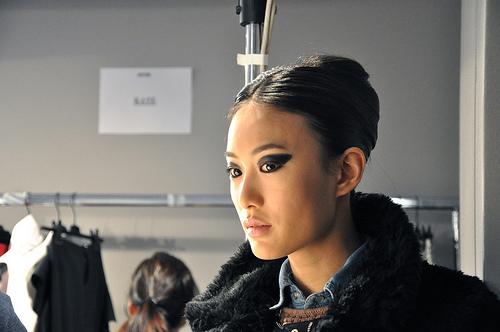 with the possible exception of the almost total collapse of governance in the US ;-) --

we thought this might be a good time to take a long, hard look at the dynamics of the luxury market in China --

especially if, as many people other than the long-time "China bust" folks are now starting to suspect,

not just slow down, but is going to have to swerve  sharply in order to avoid a total crash.

So this MAY be the proverbial "last irony", but, if so, at least we did it BEFORE everything in China came grinding to a hal

of global luxury sales in 2015, according to new research.

As we noted, even while other countries were collapsing in 2009, following Black September 2008, China continued to steam ahead,

and sales of luxury goods in the mainland rose by 16%, to about 64 billion renminbi—

down from the 20% growth of previous years, but far better than the performance of many other major luxury markets.

At a time of

As a result, China’s love for them is moving down the economic ladder,

creating opportunities and challenges for marketers who previously had only served the very rich.

While wealthy consumers -- incomes above 300,000 renminbi, or about $46,000 -- will continue to account for a majority of luxury consumption,

They already account for about 12% of the market, and their numbers are growing rapidly:

barring the crash referred to above, of course,

some expect to see 76 million households in this income range by 2015,

accounting for 22% of luxury-goods purchases.

Interest among that segment is moving beyond handbags, jewelry, fashion, and the like.

A growing number of Chinese luxury consumers are also splurging on spas and other wellness activities.

Gee, it's sounding more and more like Singapore with each new aspect ;-) .

Consumption is growing faster for such luxury services than luxury goods:

20% of these consumers said they were spending more on experiences, only 13% on products.

The Chinese are also increasingly exposed to luxury goods through

As a result, they have become more discerning.

With the surge in the number of

as well as the exploding percentages of social media users,

Chinese consumers are now familiar with nearly twice as many brands as they were in 2008.

Half of consumers surveyed in 2010, for instance, could name more than three ready-to-wear brands,

compared with only 23% two years before.

they are becoming savvier about the relationship between quality and price.

In 2010, only about half of consumers equated the most expensive products with the best ones,

Now that IS progress.

More than half of luxury consumers check product details and prices online,

compared with 13% of all urban dwellers.

Since two out of three luxury consumers have made at least one trip overseas,

they also have access to external benchmarks for comparing prices back home.

prices were at least 20% higher than they were in places such as Hong Kong.

By the way, did YOU know that prices in China are HIGHER than in Hong Kong,

long considered the Manhattan of Asia for being over-priced and insanely expensive.

It really says something awfully important about the reality of inflation in China that prices there are 20% higher than Hong - f***ing - Kong ... ;-) ...

Luxury-goods companies have long waged a battle against counterfeit goods in China.

Some luxury buyers said they felt sure that their friends would spot a counterfeit.

A woman who used her first salary check to reward herself with a luxury handbag said, “it would be meaningless if it was fake.”

What’s more, an internationally well-known brand has become one of the most important factors in making a purchase.

Really, this is sounding more and more like Singapore with each passing detail.

are creating a number of geographic markets with sizable pools of luxury-goods consumers.

More small cities will become large enough to justify the presence of stores catering to them;

some estimate luxury sales in urban areas such as Qingdao and Wuxi, for instance, will triple over the next five years.

By 2015 -- again, barring the dramatic crash that so many China observers now feel is inevitable --

and luxury consumption could pass 500 million renminbi in more than 60 cities,

That said, the luxury-goods market will remain concentrated in the top 36,

Most of the world’s luxury-goods companies are already in China or contemplating increased investment there.

They must tackle several big issues before making their next moves.

two out of three consumers are disappointed with the indifferent attitudes of salespeople.

Wow, they would be really bummed out by New York or Paris,

where even servers in the crappiest restaurants think you should kiss their ass to get them to bring you a glass of water.

While the in-store experience is by far the most important factor driving purchasing decisions,

the Internet has rapidly become the second-most-important consumer touch point for luxury categories such as fashion.

for example, they can work with social-media agencies to monitor and shape online conversations among consumers

or to identify influential bloggers and help educate them about brands.

In other words, get the Chinese cyber-sphere to be as fixed and commercialized as the ones in the West.

Not that they're not already corrupt in some ways, of course --

Finally, much of luxury’s allure comes from the opportunity to share in the rich cultural heritage associated with a brand.

This concept is rapidly catching on with Chinese luxury consumers --

somehow I'm NOT surprised at this, having had two girlfriends from China ;-) --

and many leading brands are promoting their history and craftsmanship.

But the picture isn’t totally straightforward -- to say the least:

they would prefer to buy products that were designed specifically for the country and incorporated Chinese imagery.

Now if that isn't the MOST perfect of the really deep, grass roots nationalism -- both political AND cultural --

then I don't know what is.

As Hegel so wisely noted, esthetics -- notions of beauty --

are by far the most politically telling of any cultural markers.

So let's see what happens to the luxury market in China as this next period unfolds.

All these projections could totally collapse under the weight of a traumatic slowdown.

Or they could UNDER-state the extent of the growth of this market.

When it comes to China -- just like global disasters -- William Goldman's about Hollywood rings ever true: